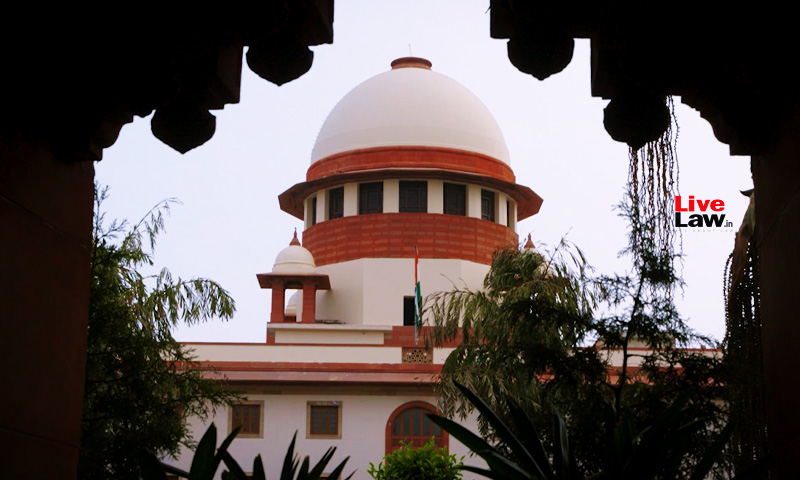 On Monday, the Supreme Court instructed its Registry to expeditiously list matters which are to be presented by parties appearing in person, after verifying at the earliest, whether they are in a position to address the Court. However, the Apex Court refused to prescribe a fixed time-line for the same. The Petitioner, 'a spokesperson for his Holiness Jagat Guru Shankaracharya ji' and...

On Monday, the Supreme Court instructed its Registry to expeditiously list matters which are to be presented by parties appearing in person, after verifying at the earliest, whether they are in a position to address the Court. However, the Apex Court refused to prescribe a fixed time-line for the same.

The Petitioner, 'a spokesperson for his Holiness Jagat Guru Shankaracharya ji' and 'a Pandit Brahmin performing rituals as per Sanatan Dharma', appeared in person before the bench comprising Justices Sanjay Kishan Kaul and M.M. Sundresh. He apprised the Bench of the discrimination faced by the parties appearing in person before the Supreme Court.

"My prayers are very simple, your lordship. Issue an appropriate direction to the registry of the Supreme Court to stop discriminating the party in person for listing the matters before the Hon'ble Supreme Court."

The Bench explained to the Petitioner that everyone cannot, intrinsically, have the right to represent their case before the highest court of the country. In view of the same, a procedure has been laid down to assess the ability of the parties-in-person to address the Court.

"What is the discrimination? Please understand, before the highest court everybody cannot have a right to appear in person intrinsically. Therefore, there is a system in place, because sometimes it creates embarrassment. Because a person may or may not be able to represent a case. Therefore, everybody cannot be given a right to represent in person. This is somebody checking up whether you will be able to present your case."

Referring to his petition, the Petitioner pointed out that as per the response of the Registry of the Supreme Court to an RTI filed by him seeking information with respect to the timelines to complete the procedure of interaction under Order 4 of the Supreme Court Rules, it had stated that under the first proviso to Order 4, no time period had been prescribed.

"…Under RTI, I asked the Registry of this Hon'ble Court, whether there is any specific time to complete the procedure under Order 4 of the Supreme Court Rules. The registry's reply states that...first proviso of Order 4 of the Supreme Court Rules, 2013 does not prescribe any time to complete the prescribed procedure of interaction. I have only two submissions. My, this petition before the Hon'ble Court was numbered last year on 6th January and was listed after one year. Sometimes what happens, you raise a cause before this Hon'ble Court and when it's listed with delay after 6 months it becomes infructuous. It is wastage of money, it is wastage of time."

Emphasising on the difficulty to monitor all procedural aspects, the Bench stated -

"In the current system 20,000 petitions are filed. We cannot hear 20,000 petitions. That's not possible. Therefore, some petitions take more time, some may take less time depending on sometimes that is perceived to be urgency in the matter. The Writ Petition that you filed wanting a time period within which your petition has to be heard. Everything you want monitored, it is very difficult. Yes, in a reasonable time frame your petition should be listed if you have been found fit to appear."

The Petitioner vehemently argued that if the Registry delays the completion of the procedure, people who do not have the resources to engage an advocate would be discouraged to appear before the Apex Court.

"Lordship may pass order as per facts and circumstances of the case, the registry can have a procedure. Even 3-4 months they can complete the procedure of interaction and list the matter before the Hon'ble Court. If that takes 1 year or 1.5 year…where urgency has been involved the matter is infructuous..This is discouragement to party-in-person. People who have the Advocates have the money to spend money and hire an advocate. So, they will gather justice frequently. And a person who does not have the money like me, they suffer a lot.

It was further highlighted by the Petitioner that parties-in-person are not allowed in the Court premises before the completion of the process of interaction and there is no mechanism to mention their matter before the Court for early hearing.

"Because party-in-person are not allowed to even enter the court, until and unless they are made. So, there is no process of mentioning for the party-in-person. So, there are a lot of difficulties, so your lordship may pass a reasonable order. At least they have some guidelines under specific time limit under which they have to complete the procedure."

Upon hearing the Petitioner, the Bench was not inclined to set out a specific timeline for the Registry, but instructed it to list such matters expeditiously.

"On hearing the petitioner in person it appears that the real grievance of the petitioner is that the petition has been listed after considerable time and even the verification as to who can address the court in person is taking an extended period of time. We have faced difficult situations over the last couple of years which continues…the Registry should endeavour to see that the it is verified at the earliest as to whether a particular party appearing in person is in a position to address the Court. Once it is verified the petition should be listed at the earliest opportunity available depending on the listing procedure. It should not be kept pending for a long period."

Another submission made by the Petitioner was that once the Court has allowed a party-in-person to appear and argue, then the whole process can be dispensed with on the next occasion.

"Once this court has allowed party in person under the application to appear and argue in person is allowed by this Hon'ble Court, then the next time it should be dispensed."

"…There are various things. If you show and file the order by which you have been permitted to appear in person, I am sure that will be taken into account…"

On repeated request of the Petitioner to provide a fixed timeline, the Bench responded -

"We have said it should be done expeditiously. That is as far as we can go."