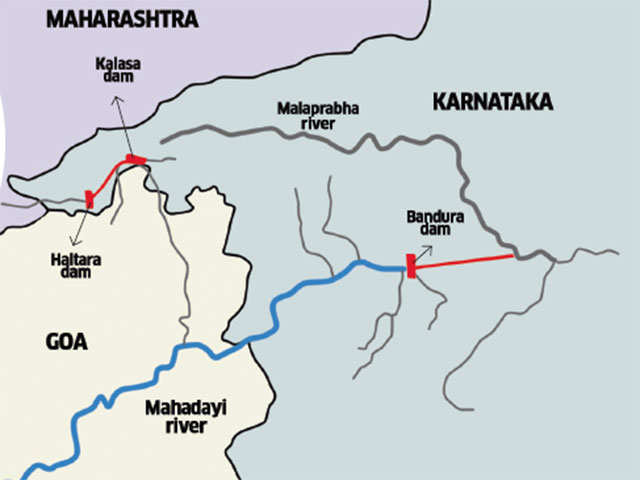 Supreme Court has on Monday directed the Joint monitoring team to submit report on issues in contempt plea filed by State of Goa with alleging illegal diversion of water of Mahadayi water by State of Karnataka. The Court has directed that the Monitoring Committee will consist of superintendent members of all three States to visit the site and submit report on the alleged...

Supreme Court has on Monday directed the Joint monitoring team to submit report on issues in contempt plea filed by State of Goa with alleging illegal diversion of water of Mahadayi water by State of Karnataka. The Court has directed that the Monitoring Committee will consist of superintendent members of all three States to visit the site and submit report on the alleged contempt.

A division Bench of Justice DY Chandrachud and Justice MR Shah issued the direction while hearing the matter regarding dispute between States of Maharashtra, Goa & Karnataka over sharing of Mahadayi water. Through these petitions, the order of the Mahadayi Water Dispute Tribunal allocating 13.42 thousand million cubic feet of water from the Mahadayi to Karnataka has been challenged by Goa and Maharashtra.

During the hearing today, the Court was informed that other than the special leave petitions filed in the matter, a contempt plea has been filed by State of Goa against the State of Karnataka for diversion of water in the Mahadayi basin.

Senior Advocate Narasimha appearing for the State of Goa submitted before the Court that both the contempt and the special leave petitions have been listed. He argued that there has been clear violation of the order from March 2020, and thus urgent submissions need to be made.

In response to the Bench's query as to what has the contempt plea impugned, Mr Narasimha explained that the contempt was regarding Karnataka's undertaking and Tribunal's order to ensure that water from Mahadayi basin does not get automatically unplugged.

Narasimha submitted that an Order was passed in context of an interim application filed by Goa. An undertaking was filed by Karnataka, in context that water from Mahadayi basin doesn't get automatically unplugged. The tribunal issued an order ensuring that the same would not happen. This was followed by the joint committee visiting the site and ensuring construction.

Narasimha added that during Covid period, the State of Goa got to know Karnataka let the water flow but not towards Goa. A Committee of Officers was then made by the State, who after visiting the site informed the State that there was an unplugging of water and there was a diversion. Therefore a contempt petition was filed.

The Bench questioned the Counsel appearing for State of Karnataka regarding the breach and how the State needs to file a counter. In response to query raised by Justice Chandrachud as to whether Karnataka has unplugged what was restored by Tribunal, the Counsel denied that no such step had been taken by the State.

In response to the Justice Chandrachud's suggestion that a third party examine the issue, Senior Adv Narasimha suggested that the Monitoring Committee appointed by Tribunal could do the task

The Bench observed that to obviate the difficulties, the Joint monitoring team with superintendent members of all three states Goa, Maharashtra and Karnataka to visit the site and submit report on the alleged contempt .

The Court clarified that the arrangement has been agreed upon to let the parties and Court know of breaches and if what was plugged have been recurred. The Bench had also directed all Contesting parties to file their written submissions in the main matter for final disposal.

Supreme Court has been hearing special leave petitions filed by three States of Goa, Maharashtra and Karnataka raising objections against the award of Mahadayi Water Dispute Tribunal (MWDT), issued on 14 August 2018. The award had allocated 13.42 thousand million cubic feet (tmcft) of water from the Mahadayi, river to Karnataka.

The State of Goa had filed an interim application in the ongoing case before the Supreme Court in March 2020 seeking directions to restrain States of Karnataka and Maharashtra from carrying out any activity in purported implementation of the award of the Tribunal dated 14th August 2018. The application had sought directions to restrain Karnataka from acting upon any clearance obtained from the Central government with respect to consumptive used within the basin and diversion of water outside the basin.

The Court's attention was drawn to the award of the Tribunal whereby it directed Karnataka to prepare a revised Detailed Project Report for consumptive used within basin or diversion of water outside the basin for more than 1.72 tmc at the proposed Kalasa dam site. Karnataka was allowed to take up works as per duly approved DPR by the Mahadayi Water Management Authority or the Union Government. Similar directions were filed for Maharashtra.

"In view of the above directions, it is evident that the order passed by the Tribunal on 17 April 2014 while disposing of IA No 1 of 2012 filed by the State of Goa is to continue in operation while certain conditions fulfilled. Hence, there is no reason to entertain the interlocutory application which has been instituted by the State of Goa having regard to the above directions which have been issued by the Mahadayi Water Disputes Tribunal" the Court had observed.