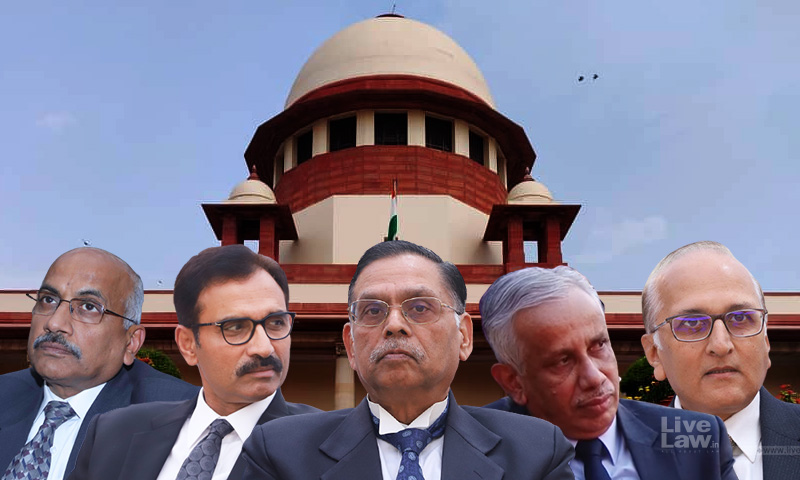 A Constitution Bench of the Supreme Court on Friday fixed the dates for hearing of the challenge against the constitutionality of the Maharasthra Socially and Educationally Backward Classes (SEBC) Act, 2018, which provided for a quota to Marathas in jobs and education.The Bench headed by Justice Ashok Bhushan has directed for hearing to commence on 8th March and to be concluded by...

A Constitution Bench of the Supreme Court on Friday fixed the dates for hearing of the challenge against the constitutionality of the Maharasthra Socially and Educationally Backward Classes (SEBC) Act, 2018, which provided for a quota to Marathas in jobs and education.

The Bench headed by Justice Ashok Bhushan has directed for hearing to commence on 8th March and to be concluded by 18th March, 2021.

Further, in case physical functioning of the Supreme Court resumes by 8th of March, then the matter will be heard in physical court. Otherwise, it shall be heard virtually.

In today's hearing, Senior Advocate Mukul Rohatgi reiterated to the Court his request to hear the matter in physical court due to the voluminous files involved.

"The record shows that there are more than 30 volumes, both sides. Compilations have not been filed. It's being agreed between the parties that 30-40 copies of 30 volumes need to be printed. The printing will take at least two weeks. It's my request that it is kept on 1st March", submitted Rohatgi.

The Bench considered the suggestion and directed for the matter to be accordingly listed on 8th March.

At this juncture, Attorney-General KK Venugopal submitted to the Court that he was on notice. Further, three similar matters were to be heard on the coming Monday and he request the Court to tag them with the instant appeal. This was opposed by Rohatgi and the Bench consequently noted that it was a separate issue, and that they would hear the matter and then decide.

A discussion also took place on the binding nature of the 9-Judge Bench judgement of Indra Sawhney.

Senior Advocate Kapil Sibal averred that the Respondents wanted the case to be referred to an 11-Judge Bench. This was supported by Rohatgi who stated, "The issue is whether we will always be bound by the 9-Judge Bench. It's not that Indra Sawhney is cast in stone. If it requires a re-look, then a re-look will be had".

The matter will now be heard on 8th March.

During the 9th December, 2020,, the Bench had refused to pass any order to lift the stay put by a Three-Judge Bench in September 2020 on making appointments and admissions under the Maratha quota. The stay order was passed by the 3-judge Bench headed by Justice L. Nageswara Rao which had referred the appeals to the larger Bench.

Senior Advocate Mukul Rohatgi, appearing for the State of Maharashtra, submitted that an application seeking modification of the order has been filed so that appointment process can proceed. He submitted that when a case is referred, the reference bench cannot pass interim orders and that the whole issue must be left to the Constitution Bench. He submitted that it is the settled law and practice.

The Bench comprising Justices Ashok Bhushan, L Nageswara Rao, S Abdul Nazeer, Hemant Gupta and S Ravindra Bhat was not inclined to consider the interim prayer for vacation of stay and instead said that the matter can be finally heard in January.

The 5-judge Bench also issued notice to the Attorney General for India as the matter involves the interpretation of the 102nd Amendment to the Constitution.

"We are of the view that due to the issues which have been raised in these civil appeals and the effect and consequences which follow, it is necessary that the Civil Appeals be heard and the final hearing be concluded as early as possible.The court is closing for winter vacations on 18th Dec. List these appeals week commencing Jan 25", the Bench said in the order.

The Bench also allowed the counsels to submit written submissions by the second week of January.

The September 9th Order held that no appointments or admissions shall be made under the impugned Act for the year 2020-2021. However, post-graduate admissions that had taken place till date would remain unaltered.

On September 9, 2020, the three-judge Bench referred the cases to larger bench to determine the issue whether State Government has the power to declare a class as Socially and Economically Backward after the Constitution (102nd) amendment.