Can Maternity Leave Under CCS Rules Be Denied On Grounds That Woman Has 2 Step-Children?: Supreme Court To Consider 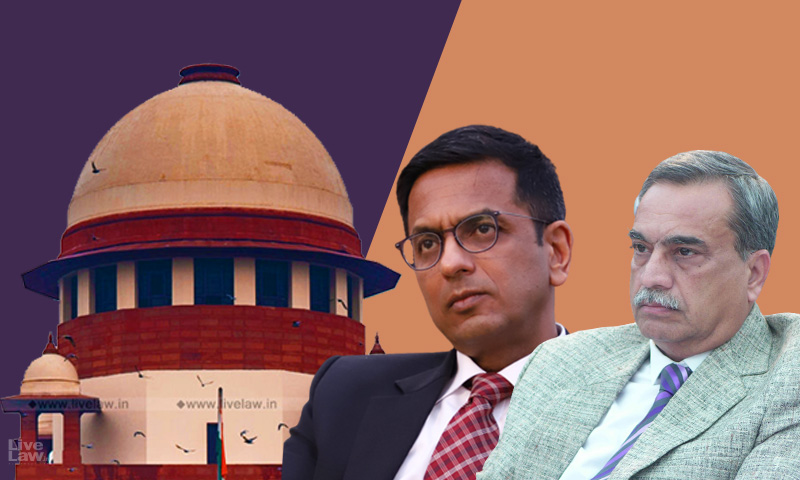 The Supreme Court has agreed to consider whether Central Civil Services (Leave) Rules, 1972 can be interpreted in a way to include even the step-children of a woman to deny her the benefit of maternity leaves or can only the biological child can be considered for the purpose of grant of maternity leave. The bench of Justices DY Chandrachud and M.R Shah was considering an SLP arising out of...

The Supreme Court has agreed to consider whether Central Civil Services (Leave) Rules, 1972 can be interpreted in a way to include even the step-children of a woman to deny her the benefit of maternity leaves or can only the biological child can be considered for the purpose of grant of maternity leave.

The bench of Justices DY Chandrachud and M.R Shah was considering an SLP arising out of a decision of the Punjab and Haryana High Court which confirmed the view of the Central Administrative Tribunal denying the petitioner the benefit of maternity leave under Rule 43 of the Central Civil Services (Leave) Rules 1972 on the ground that her spouse had two surviving children born from his previous marriage in respect of who she had earlier availed child care leave.
Rule 43 of Rules, 1972 provides that a female Government servant with less than two surviving children may be granted maternity leave for a period of 180 days from the date of its commencement, and during such period, she shall be paid leave salary equal to the pay drawn immediately before proceeding on leave.
"We have to give a purposive interpretation to the Rule", observed Justice Chandrachud.
Issuing notice on the SLP, the bench proceeded to record in its order,

"Whether CCS (Leave) Rules, 1972 should have been read in the manner which does not defeat the purpose of the Statute as authorities should have distinguished between Step Children and biological child of petitioner", is raised as a question of law in the SLP. It is contended that Rule 43 cannot be interpreted in the manner which defeat the very purpose of framing the Statute which grants the benefit of maternity leave of 180 days to a female Government servant for the proper care of her first newly born child out of her legal wedlock and as such the two children born from the previous marriage of the petitioner's husband cannot be treated to be two children of the petitioner.
On behalf of the SLP petitioner, it is pointed out that Section 5(3) of the Maternity Benefit Act, 1961 says that while the maximum period for which any woman shall be entitled to maternity benefit shall be twenty-six weeks, the maximum period entitled to maternity benefit by a woman having two or more than two surviving children shall be twelve weeks. Further, it is indicated that section 27 of the Act provides that the provisions of this Act shall have effect notwithstanding anything inconsistent therewith contained in any other law or in the terms of award, agreement or contract of service, whether made before or after the coming into force of the Act.
"The High Court has also completely ignored that the CCS rules are inconsistent with the provisions of Maternity Benefit Act whereby CCS rules completely deny maternity benefit to the Government Female Employee who had more than one living child. Thus, Maternity Benefit Act allow complete maternity benefits to female employee upto two living children and thereafter partial maternity benefits to female employee", it is averred.
Moreover, the SLP poses for the consideration of the Court whether the Maternity Leave sought by the petitioner is in contradiction of Rule 5(3) of The Maternity Benefit Act, 1961 whereby the maximum period entitled to maternity benefit by a woman having two or more than two surviving children shall be twelve weeks of which not more than six weeks shall precede the date of her expected delivery.
"The High Court has also wrongly dealt with the issue regarding Rule 43 of the CCS (Leave) Rules 1972 and provisions of Maternity Benefit Act in a manner which defeated the very purpose of the framing of law. Thus, the High Court has committed an error of law by not interpreting the harmonious purpose of the Act & Rule. Hence, the High Court has committed an error of law by providing more weightage to rules which are contrary to welfare provision of statutes", it is advanced.
Besides, it is urged that Rule 65 of the 1972 Rules envisages that where any Ministry or Department of Government of India is satisfied that the operation of any of these Rules causes undue hardship in any particular case, it may dispense with or relax the requirements of that rule for dealing with the case in a just and equitable manner.
"The High Court has completely ignored that addition of name of step children in service documents merely on the application and seeking child care leave on two occasions for the same children cannot be treated as barrier to the Maternity Leave for biological child of the petitioner under Rule 43 of the CCS (Leave) Rules 1972 and Maternity Benefit Act", it is submitted.
The petitioner is working on the post of Nursing Officer in Post Graduate Institute of Medical Education and Research, Chandigarh. In February, 2014, the petitioner solemnized marriage with one Amir Singh as per Hindu rites and rituals. While it was the first marriage of the petitioner, for her husband it was a second marriage, his earlier wife having passed away. From his first marriage, the petitioner's husband had two children. On 04.06.2019, a boy child was born from her wedlock to the petitioner. The Petitioner applied for maternity leave from 27.06.2019 to 23.12.2019 and availed the same. On 03.07.2019, the Institute sought clarification pertaining to some facts including two children from the first wife of her husband to which she submitted a detailed reply mentioning all the facts. On 03.09.2019, the Institute rejected the request of petitioner for maternity leave keeping in view the fact that she availed child care leave earlier by showing two surviving children and thus for the third child, the maternity leave was not admissible as per rule and consequently, the period of leave w.e.f 30.05.2019 to 03.06.2019; 04.06.2019 to 27.10.2019; 27.10.2019 to 06.11.2019; and 07.11.2019 to 31.11.2019 was treated as earned leave, medical leave, half pay leave and extraordinary leave, respectively. The period of extraordinary leave was ordered to be not counted towards increment.
The Original Application preferred by the petitioner was rejected by the CAT vide impugned order dated 29.01.2021.
Subsequently, the writ petition before the High Court was also dismissed. "A bare perusal of (Rule 43) would reveal that maternity leave can be granted to a female Government servant only if she has less than two surviving children. Though, the petitioner is not the biological mother of the two children born from the first wedlock of her husband, she cannot deny the fact that now she is the mother of them also after having married to Amar Singh. In this way, the petitioner has already two surviving children. Not only this, she has also availed CCL for them from the respondent Department. In this view of the matter, any child born to her is to be considered as a third child. We are of the considered view that the CAT has rightly observed in the impugned order that '...for all practical purposes, the applicant has two surviving children. As such, any child born to her now can only be considered as a third child'", said the High Court in the impugned order.