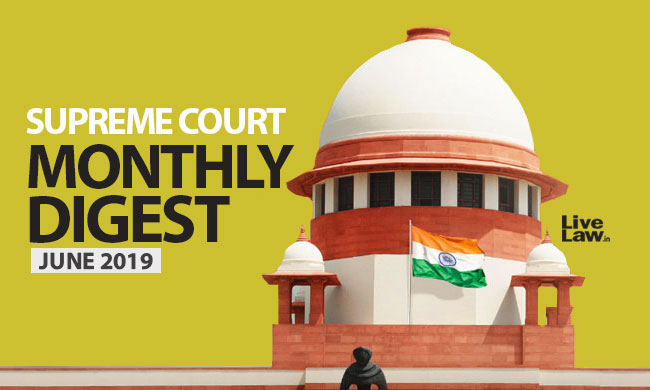 Cannot Burden Insurer To Follow Up An Inadequate Disclosure Of Material Facts By The Insured Oriental Insurance Company Ltd. vs. Mahendra Construction The Supreme Court observed that it is duty of the insured while making the proposal to make a clear and specific disclosure of material facts and that the insurer cannot be burdened to follow up an inadequate disclosure. As per...

The Supreme Court observed that it is duty of the insured while making the proposal to make a clear and specific disclosure of material facts and that the insurer cannot be burdened to follow up an inadequate disclosure. As per the relevant policy in this case, the details of claims lodged during the preceding three years were required to be disclosed but were not furnished by the insured. The Insurance Company repudiated the claim.

The Supreme Court observed that merely because the seats are lying vacant, it is not a ground to grant extension of time for PG Medical Courses Counseling and grant further opportunity to fill up vacant seat. The bench comprising Justice Deepak Gupta and Justice Surya Kant said that extension cannot be granted just because some seats are lying vacant without there being any other justification. It also noted that the society want a general extension of time not on account of any particular difficulty faced by any individual college or university but generally on the ground that a large number of seats for the P.G. courses are lying vacant

Foundation for Organizational Research and Education for School of Management V. All India Council for Technical Education

The Supreme Court deprecated the tendency of the educational institutions admitting students beyond the numbers permitted and thereby putting the future of the students at stake.The court was considering a plea by Foundation for Organizational Research and Education Fore School Management challenging the action of All India Council for Technical Education in rejecting their request for extension of approval of existing seats and for increase in seats in certain courses.

Observed that concessions made by a lawyer on mixed questions of fact and law cannot bind the party. The bench of Justices R F Nariman and Vineet Saran was deciding an appeal filed by Bharat Heavy Electronics Ltd against the judgment of High Court refusing to quash a Labour Court's award, which had directed reinstatement of certain retrenched employees.

The Supreme Court observed that the requirement of "No Objection Certificate" from the diplomatic mission of the country where the foreigner or the person requesting adoption resides, under Section 59(12) of the Juvenile Justice (Care and Protection of Children) Act, 2016, cannot be waived.

The Supreme Court observed that there cannot be State Probation Rules in total contradiction to the Section 433A of the Code of Criminal Procedure. Section 433, the Court noted, states that where a sentence of imprisonment for life is imposed for an offence which is punishable by death sentence, such person shall not be released from prison unless he has served 14 years of imprisonment.