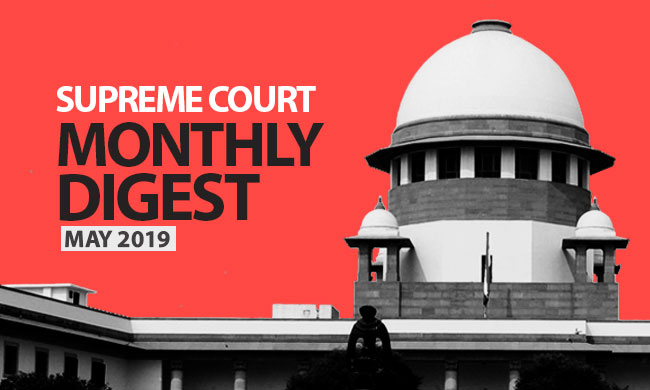 The Supreme Court observed that the writ of habeas corpus is maintainable where it is proved that the detention of a minor child by a parent or others was illegal and without any authority of law. The bench comprising Justice R. Banumathi and Justice R. Subhash Reddy affirmed a Bombay High Court judgment that directed the relatives of a deceased mother to hand over the custody of the child to the-father. The contention raised in this case

Specific Performance: Plea Of Hardship Cannot Be Raised If Not Pleaded In Written Statement

The Supreme Court held that the "document" as defined in Section 29 of the Indian Penal Code is a "moveable property" within the meaning of Section 22 IPC and the information contained thereon in the documents would also fall within the purview of the "corporeal property" and can be the subject matter of the theft.

Lawyer Is Not Just His Client's Mouthpiece; Be Responsible While Making Presentation To The Court

Everyone has to be responsible and careful in what they present to the Court, said the Supreme Court while reiterating that a lawyer demeans himself if he acts merely as a mouthpiece of his client. This observation was made by a bench comprising Justice Arun Mishra and Justice Navin Sinha on Wednesday while allowing an appeal filed by a lecturer in a private unaided college affiliated to the Chaudhary Charan Singh University.

The Supreme Court quashed a criminal case lodged against expelled AIADMK Leader and Member of Parliament Sasikala Pushpa and her husband with respect to the alleged forgery committed by them in signing the Vakalatnama.

The Supreme Court observed that a borrower has no right to be represented by a lawyer before the In-House Committee of banks constituted for the purpose of determining whether he is a willful defaulter or not. The bench comprising Justice Rohinton Fali Nariman and Justice Vineet Saran set aside a Delhi High Court judgment that held that a lawyer has the right to represent his client before such in-house committees.

The Supreme Court observed that the decision to impose a punishment higher than the minimum prescribed under the Narcotic Drugs and Psychotropic Substances Act, 1985 is not confined or limited to the factors enumerated in clauses (a) to (f) of Section 32B of the. The bench comprising Justice Ashok Bhushan and Justice KM Joseph observed that the quantity of substance with which an accused is charged is a relevant factor, which can be taken into consideration while fixing quantum of the punishment.

The Supreme Court held that a Revision Petition before the National Consumer Disputes Redressal Commission [NCDRC] is not maintainable against an order passed by the State Consumer Commission in execution proceedings. The bench comprising Justice UU Lalit and Justice Indu Malhotra observed that orders passed for enforcement of the final order in the Consumer dispute, cannot be construed to be orders passed in the 'consumer dispute'.

Holding that "a unilateral addition or alteration of a contract can never be foisted upon an unwilling party", the Supreme Court set aside an arbitral award on the grounds of it being in conflict with "most basic notions of justice" and thereby conflicting with "public policy of India" as per Section 34(2)(b)(ii)(iii) of the Arbitration and Conciliation Act 1996.

The Supreme Court upheld the Constitutional validity of the Karnataka Extension of Consequential Seniority to Government Servants Promoted on the Basis of Reservation (to the Posts in the Civil Services of the State) Act 2018. The said enactment provided for consequential seniority to persons belonging to the Scheduled Castes and Scheduled Tribes promoted under the reservation policy of the State of Karnataka.

SC-ST Reservations Are True Fulfillment Of Effective And Substantive Equality

In its judgment upholding the 2018 Karnataka Law granting reservation in promotion for staffs belonging to Scheduled-Caste and Scheduled-Tribe communities, the Supreme Court observed SC-ST Reservations are the true fulfilment of effective and substantive equality by accounting for the structural conditions into which people are born.

Judges are not fearful saints, but have to fearless preachers, said the Supreme Court while upholding the Allahabad High Court order convicting an Advocate for criminal contempt for misbehaving and assaulting a Chief Judicial Magistrate. The bench comprising Justice Arun Mishra and Justice Navin Sinha, however, suspended the sentence of imprisonment of 6 months awarded by the High Court to Advocate Rakesh Tripathi for further period of 3 years subject to his maintaining good and proper conduct with a condition that he shall not enter the premises of the District Judgeship, Allahabad for a further period of three years in addition to what he has undergone already.

The Supreme Court judgment in Birla Corporation Limited vs. Adventz Investments and Holdings Limited drew some parallels with its recent order in Rafale Review Petitions. While in Rafale, the issue was about admissibility of documents allegedly 'stolen' from the Ministry, here the issue before the bench comprising Justice R. Banumathi and Justice R. Subhash Reddy was whether the act of some shareholders accused of 'stealing' some documents of a company to present it before Company Law Board [CLB] and other judicial forums amounted to 'theft and misappropriation' under Indian Penal Code.

In Limine Dismissal Of SLP At Threshold Neither Constitutes Declaration Of Law Nor A Binding Precedent, Reiterates SC

The Supreme Court has reiterated that in-limine dismissal of Special Leave Petition at the threshold without giving any detailed reasons, does not constitute any declaration of law or a binding precedent under Article 141 of the Constitution. In this case

The Supreme Court observed that even if the family settlement was not registered, it would operate as a complete estoppel against the original plaintiff who was party to such settlement.

The Supreme Court reiterated that successive bail applications filed by an accused should be placed before the same Judge who had refused bail in the first instance, unless that Judge is not available.

Contract [Niyojit] Teachers Are Not Entitled To Salary At Par With Regular Permanent Teachers: SC Sets Aside Patna HC Judgment

In a setback to about 4 Lakh Niyojit Teachers (contract Teachers) in Bihar, the Supreme Court set aside a Patna High Court judgment which had held that they are entitled to a salary at par with regular permanent teachers. Allowing the appeals filed by the State, the bench comprising Justice Abhay Manohar Sapre and Justice Uday Umesh Lalit observed that such a situation could create tremendous imbalance and cause great strain on budgetary resources.

The 'Acid' Undoubtedly A 'Corrosive' Substance Within The Meaning Of S.326 IPC

Omanakuttan v. The State of Kerala

With acid attack cases seeing a phenomenal increase in country and victims literally "living under the shadows" for the rest of their lives, Bench of Justice Abhay Manohar Sapre and Dinesh Maheshwari, while dismissing appeal of the accused appellant observed that "the acid is undoubtedly a corrosive substance within the meaning of Section 326 IPC.

Section 319 CrPC: Persons Named In FIR, But Not Chargesheeted Can Be Summoned Even If Stage Of Protest Petition Is Over

The Supreme Court observed that a trial court can summon under Section 319 of the Criminal Procedure Code, those persons named in FIR, but who were not charge-sheeted, even if the stage of giving opportunity to the complainant to file a protest petition is over.

Electronic Evidence: Failure To Produce Certificate U/s 65B Evidence Act Along With Chargesheet Not Fatal To Prosecution

The Supreme Court observed that mere pendency of a civil case between complainant and accused is not a reason to quash criminal case. Terming the High Court view 'erroneous', the bench comprising Justice Abhay Manohar Sapre and Justice Dinesh Maheshwari observed: "The High Court failed to see that mere pendency of a civil suit is not an answer to the question as to whether a case under Sections 323, 379 read with Section 34 IPC is made out against respondent Nos. 2 and 3 or not…"

The Supreme Court observed that the payment of part sale consideration or stamp duty by another person cannot be the sole criteria to hold the sale/transaction as benami.

The Supreme Court observed that the termination of Arbitration proceedings by the Arbitrator under Section 32(2) (c) of the Arbitration and Conciliation Act cannot be recalled.

An application for review or modification could not have been entertained, the Supreme Court observed while setting aside a High Court order in a Section 482 CrPC petition.

The Supreme Court ordered that no new appointments to the post of District Judges shall be made from in-service candidates against quota reserved for Bar 'now-onwards' The bench comprising Justice Arun Mishra and Justice Navin Sinha refused to pass any further interim orders either by permitting in service candidates to stake their claims in the examination or for being appointed as against the quota reserved for bar.

The Supreme Court observed that right to appeal before the Foreigners' Tribunal against non-inclusion in National Register of Citizens is available only in those cases, where the Tribunal has not already adjudicated upon and decided the issue as to whether the person is an Indian National or a foreigner.

The Supreme Court observed that an accused cannot be indefinitely kept in jail for his inability to produce registered surety for reasons beyond his control. The bench comprising Justice Indira Banerjee and Justice Sanjiv Khanna directed the Chief Metropolitan Magistrate, Calcutta, to consider modifying the orders passed in the bail plea of one Wasim Ahmed, without insisting on registered surety.

The Supreme Court, in a judgment delivered last month, noted that under the Mental Health Care Act, 2017, there is a statutory right for mentally ill persons to live with dignity The bench comprising Justice NV Ramana, Justice Mohan M. Shantanagoudar and Justice Indira Banerjee observed that Section 20 (1) of the Mental Health Care Act explicitly provides that 'every person with mental illness shall have a right to live with dignity'.

The Supreme Court observed that the expression "company" used in Section 141 of the Negotiable Instruments Act includes a partnership firm or association of persons. Allowing the appeal, the bench said: "Section 141 undoubtedly uses the expression "company" so as to include a firm or association of persons. The fact that the first accused, in the present case, is a partnership firm of which the remaining two accused are partners has been missed by the High Court."

The Supreme Court reiterated that, even in a case of death by a single blow, but on the vital part of the body, the case may fall under Section 302 of the Indian Penal Code (Murder). The bench comprising Justice MR Shah and Justice AS Bopanna were considering an appeal filed by the State of Madhya Pradesh against alteration of the conviction of an accused from Sections 302/149 to Section 304 Part II of the IPC by the High Court.

The Supreme Court dismissed a plea challenging Telangana High Court judgment that held that a person can be arrested by the competent authority in cases of Goods and Service Tax (GST) evasion. The vacation bench of Chief Justice of India Ranjan Gogoi and Justice Aniruddha Bose, dismissing the Special Leave Petition, said that it is not inclined to interfere.

A Murder Is A Murder Even If It Arises Out Of Matrimonial Dispute: SC Denies Bail To Murder Convict

A murder is a murder whether it arises out of matrimonial dispute or otherwise, remarked Supreme Court while rejecting the bail plea of a man who is in custody for about 13 years.

The Supreme Court observed that Section 25F of the Industrial Disputes Act will be applicable even in cases of workmen terminated on the ground that their appointment was illegal. The bench comprising Justice Arun Mishra and Justice MR Shah observed that "invalid appointment" is not covered in the Exceptions under section 2 (OO) of the Industrial Disputes Act.