Being National Green Tribunal, NGT Must Have Alacrity, Concern For Environment: Supreme Court 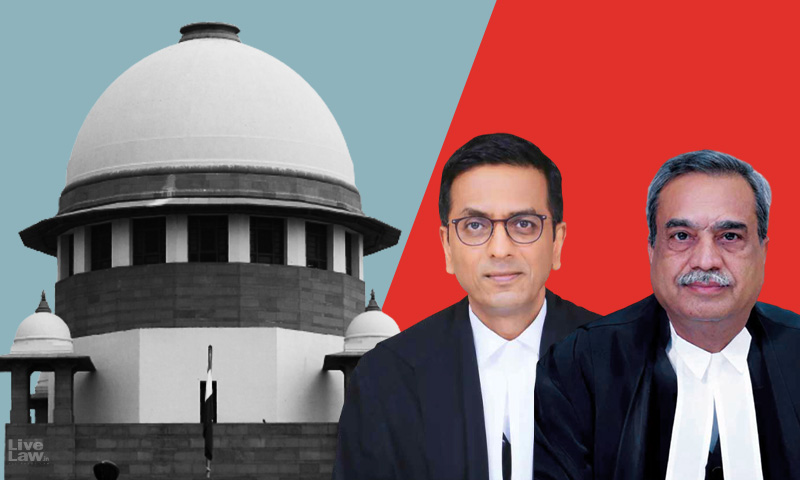 "Being the 'National Green Tribunal', the NGT must have some alacrity and concern for the environment!", observed Justice D. Y. Chandrachud on Thursday.The bench of Justices Chandrachud and M. R. Shah was considering an appeal arising out of the NGT's adjudication of allegations of failure of authorities in preventing the blowout of Baghjan 5 oil well of the Respondent-Oil India Ltd.,...

"Being the 'National Green Tribunal', the NGT must have some alacrity and concern for the environment!", observed Justice D. Y. Chandrachud on Thursday.

The bench of Justices Chandrachud and M. R. Shah was considering an appeal arising out of the NGT's adjudication of allegations of failure of authorities in preventing the blowout of Baghjan 5 oil well of the Respondent-Oil India Ltd., resulting in a massive fire causing irreparable loss to the entire biodiversity of the region and loss of lives and property. The issue for consideration in these matters by the NGT was the remedial steps for restoration of the environment and compensation to the victims on account of damage resulting from the incident of oil blowout on May 27, 2020 from the oil well belonging to the OIL which released huge amount of toxic gases and, other consequential events, including fire incident June 9, 2020 that followed, at Baghjan in Tinsukia District of Assam.

"The NGT, by its order of June 24, 2020, had set up a committee of experts, following damage and destruction to the Dibru Saikhowa forest reserve due to blowout from Baghjan 5 Oil well in May, 2020, to look into extent of the damage and responsibilities of the OIL...Subsequently, on February 19, 2021, the NGT has constituted a six-member committee to fix responsibilities for failure of the concerned individuals in the present incident, a seven-member committee to look into non-compliance with statutory provisions, and a ten-member committee to assess the damage to the environment which is to comprise the Managing Director, OIL Ltd.", noted the bench on Thursday.

"We are surprised by this order of the NGT. It is the OIL Ltd. which is responsible for the damage to the wetlands and its own Managing Director has been inducted into the committee?!", Justice Chandrachud had observed at the outset.

"We are very dissatisfied with the manner the NGT has pushed the matter off its hands. It is the National Green Tribunal, it must have some alacrity and concern for the environment. We might decide it ourselves. We will hear you and reconstitute the committee- One Committee, which may be headed by a former Supreme Court judge and would comprise environmental experts. We will do that exercise here only", said the judge to the Senior Advocate for the petitioner.

"And after the report of the first committee, three committees have been set up separately! What is this?", pointed out Justice Shah.

The bench also agreed with the petitioner's submission that the Committees so constituted are stuffed with bureaucrats and comprise hardly any experts.

The bench summarised the grievance of the SLP petitioner as 2-fold- one, that the first committee had filed a comprehensive report before NGT and the constitution of new committees will only delay the issue, and two, the 10-member committee for assessing the damage to the environment and remedial restoration plan includes the MD of the OIL, which "amounts to being a judge in their own cause" and a violation of the basic principles of natural justice.

The bench stayed the February 19 order of the NGT, whereby, after considering the reports of the first Committee, the objections of the OIL and the submissions of the applicants, the Tribunal passed a lengthy direction to address the following aspects: (a) Compensation to the victims of the incidents for the damage to the houses, trauma, loss of earning and health cost incurred etc; (b) Accountability for the failure of OIL to follow safety protocols in preventing the incident and remedial steps to prevent such incidents in future; (c) Accountability for non-compliance of statutory norms under the Water, Air and Environment laws and remedial action; (d)Assessment of damage to the Environment and restoration measures, including measures for restoration of Dibru-Saikhowa National Park and the Maguri-Motapung Wetland.

The bench also issued notice on the appeal to the OIL Ltd., MoEF and Ministry of Petroleum.

On June 24, 2020, while issuing notice to the OIL, the Tribunal constituted eight-member Committee headed by a former Judge of Gauhati High Court to ascertain the cause of the incident, persons responsible for the incident and for the failure to prevent the same, extent of damage to the human life, wildlife, Dibru-Saikhowa National Park (DSNP), the Maguri-Motapung Wetland (MMW), assessment of proposed compensation to the victims and for restitution of the property and the environment, remedial measures, including steps to prevent recurrence. The NGT also directed Government-owned Oil India Limited (OIL), to deposit a sum of Rs. 25 Crores with the District Magistrate, Tinsukia District, Assam, in connection to a massive fire which exploded from OIL's Baghjan well.

Subsequently, the bench of Chairperson Justice Adarsh Kumar Goel deferred the direction till the actual amount and disbursement plan is formulated by the eight member committee appointed by the Tribunal.

On February 19 this year, after perusing the reports of the above committee, the Tribunal found that the incident in question is a massive one as the blowout resulted in fire which continued for almost six months inspite of efforts of all the Experts, hired by the OIL. Well killing operations, to avoid further damage, have taken more than six months. The damage caused is extensive. The statistics furnished by the OIL itself are that 3000 families were affected and 9000 persons were displaced from their houses and accommodated in 12 relief camps. 10 relief camps were set up as a result of first incident dated 27.05.2020 and two more camps after the incident dated 09.06.2020. Each camp had 750 persons.

"Though number of claims were put forward, major part of the issue stands resolved in terms of tri-partite arrangement between the victims, the OIL and the Deputy Commissioner, as per letter of the Deputy Commissioner dated 25.9.2020 and letter of the OIL dated 2.12.2020. The OIL has admitted its liability to 600 families to the extent of Rs. 15 lakhs each for 161 families and Rs. 10 lakhs each to the 439 families which runs to about Rs. 68 crores. It has already paid Rs. 30,000/- each to 3000 persons i.e. Rs. 9 crores and Rs. 12 lakhs each to 11 families i.e. Rs. 2.2 crores. Further, Rs.50000/- each has been paid to the families who have left the camps to meet the cost of rent, food etc. According to the OIL, it has spent about Rs. 11 crores on the camps and also incurred expenditure on managing the blowout which is said to be about Rs. 151 cores. While the Committee has suggested payments towards compensation to be treated as interim, the OIL does not accept any further liability. In view of substantial number of victims having been compensated upto a reasonable level, the issue will have to be taken as concluded as far as the present proceedings are concerned. This Tribunal cannot enter into further adjudication in absence of the victims and authentic data. While floor level compensation can be directed to be paid even on some guesswork, higher compensation claims require adjudication, based on evidence of loss. As already observed, in absence of relevant data, we are unable to determine the claims for higher compensation, beyond the amounts already paid or conceded by the OIL", the Tribunal said.

It observed that the principle of absolute liability is attracted to such incidents in accordance with law laid down in M.C. Mehta v. Union of India & Ors. (1987) 1 SCC 395 and thus the victims are entitled to compensation atleast on principle of restitution without proving negligence. However, it noted that evidence of the extent of loss suffered by each of the claimants is required, except for some sort of compensation to be awarded by applying rule of thumb. To this extent compensation appears to have already been paid during these proceedings with the intervention of the Committee and the authorities. "Thus, while requiring the OIL to pay whatever compensation is undisputed forthwith, we propose to leave the rest of the matter to be decided in appropriate remedies of the victims. However, we propose to lay down a mechanism to deal with some of the issues emerging from the report of the Committee. It is made clear that this order will not debar any victim of the occurrence who is aggrieved by denial of compensation or inadequacy of compensation to take remedies for such claim before any appropriate forum in accordance with law", said the Tribunal.

Besides, prima facie agreeing with the report of the Committee that there was failure of the OIL in taking safety precautions and that there is need for ensuring that such incidents do not recur, the Tribunal directed this aspect to be gone into by a six-member Committee headed by the Secretary, Ministry of Petroleum and Natural Gas. "The said Committee may review the situation and take appropriate remedial measures, including fixing responsibility for the failures of the concerned individuals in the present incident. It may also lay down the road map for ensuring compliance of safety protocols by all similar installations. Effective execution of such road map may be ensured by the Secretary, Ministry of Petroleum and Natural Gas", it was directed.

Further, the 8-member had Committee found that there are non-compliances of statutory provisions of the Air Act, Water Act, the EP Act, including the Hazardous Waste Rules, the requirement of EC and compliance of EC conditions, and the OIL had submitted its stand disputing the findings of the Committee. The Tribunal in February directed that the issue of accountability for the past compliances and the remedial action therefor be looked into by another seven-member joint Committee.

As regards the assessment of damage to the Environment and restoration measures, including measures for restoration of Dibru-Saikhowa National Park and the Maguri-Motapung Wetland, the tribunal directed this aspect to be looked into and remedial measures planned by the ten-member Committee which was to comprise the Managing Director, OIL.