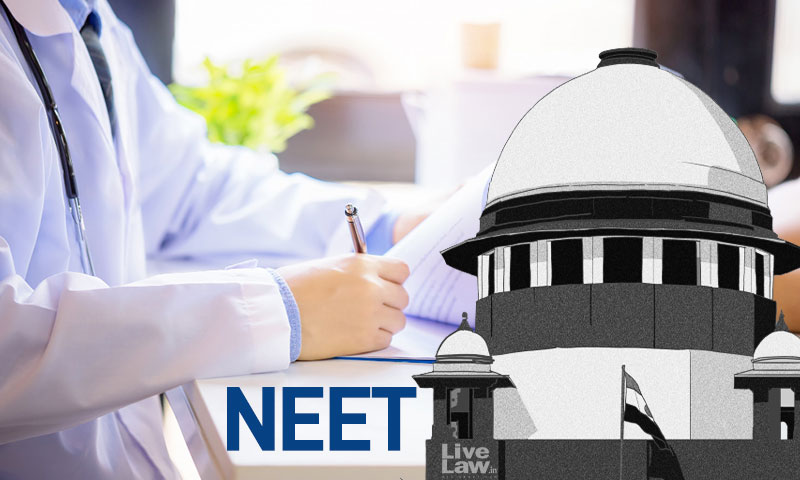 In a writ petition preferred by a NEET PG aspirant alleging impersonation in the Counseling by a candidate who took admission in her name in the State of Karnataka, the Supreme Court on Friday sought clarification from MS Ramaiah Medical College as to who was occupying the said seat. The bench of Justices DY Chandrachud and Surya Kant in their order said, "Karnataka...

In a writ petition preferred by a NEET PG aspirant alleging impersonation in the Counseling by a candidate who took admission in her name in the State of Karnataka, the Supreme Court on Friday sought clarification from MS Ramaiah Medical College as to who was occupying the said seat.

The bench of Justices DY Chandrachud and Surya Kant in their order said, "Karnataka Examination Authority has filed an affidavit in pursuance to the order dated April 29. We direct MS Ramaiah Medical College to file counter clarifying who is occupying the seat which is said to have been allotted in round 2 in the name of the petitioner within a period of 3 weeks."

When the matter was called for hearing, ASG Aishwarya Bhati while apprising the bench of the registration of FIR by the State of Karnataka stressed on the fact that the matter needed to be investigated.

"FIR has been registered by Karnataka. Showing how many steps were taken by us as to whether it was done by the petitioner or somebody on her behalf, investigation needs to be done in the matter. Nothing remains now," ASG Bhati said.

Appearing for the petitioner, Senior Advocate Sanjay Hegde while contending that the matter pertained to an "identity theft" submitted that the petitioner could only get the seat either in Maharashtra or Gujarat but someone in Karnataka was occupying petitioner's seat.

"If I had a medical seat in MS Ramaiah medical college, I wouldn't have been before your lordships. I could not have a seat. I can only get a seat in Gujarat or Maharashtra but someone in Karnataka is occupying my seat. I know I've lost my seat for the year but this is some fraud which will continue. The seat has gone to somebody which will subsequently be regularized through some process or another. College has to come and say as to who is occupying this MD Obs Gynae seat and if that lady is not there, who is occupying. This is identity theft," submitted Senior Counsel.

"This is a far fetched theory which you have developed. There is nothing we can do today now," remarked Justice Chandrachud.

Appearing for the Karnataka Examination Authority, counsel submitted that, "Everything original documents have been done though her own user ID & PW. She has made the payment of 12 lakh rupees."

On Senior Counsel urging the bench to direct the college to file an affidavit, the bench showed its reluctance and said, "That'll come during the course of investigation, why should we order? We can't grant your prayers today."

Convincing the bench, Hedge said, "I have lost not only a seat there but a seat everywhere. Your lordships know how much a seat costs."

"Why should we entertain it here Mr Hedge? There is no way now Mr Hegde," remarked Justice Chandrachud.

"I don't want to be unreasonable but with a sense of authority, I am requesting your lordships as to who is sitting in the college on that seat. There is somebody who has benefited from this impersonation. That seat whoever is occupying is, your lordships needs to ask who has joined it," submitted Senior Counsel.

Acceding to the request, Justice Chandrachud said, "We can ask the college to file an affidavit."

The petitioner had participated in AIQ Round 1 and round 2 and was allotted a seat in M.D. Psychiatry in Mahatma Gandhi Institute of medical sciences, Wardha, Maharashtra in AIQ Round 2 but she did not join the AIQ seat and exited with forfeiture.

On exiting, she participated in State of Maharashtra counseling in the State Quota she was allotted M.D. Chest and T.B. from Indira Gandhi Government Medical College, Nagpur but did not join the state seat too.

Against this backdrop, the petitioner had challenged the notice dated April 16, 2022 issued by the State of Maharashtra debarring her to participate in fresh mop up round.

It was stated in the petition that in terms of the order dated March 31, 2022 wherein the Top Court had said that students who have joined in round 2 of the state quota or round 2 of the AIQ shall not be eligible to participate in the mop-up round for All India Quota, the petitioner was eligible to participate in the fresh mop up round as she did not join round 2 AIQ seat or State Quota seat.

"Thus, the Petitioner is eligible to participate for fresh AIQ Mop-Up and in the most arbitrary, mechanical and illegal manner blocked by impugned notice dated 16.04.2022. This despite the fact that the Respondent No.2 in its notice dated 26.03.2022 clearly showed status of the Petitioner as Non Joined/canceled candidate. That this is in gross violation of the Fundamental Rights guaranteed by the Constitution and hence the Petitioner is constrained to knock the doors of this Hon'ble Court," the petition stated.

The petitioners were represented by Dubey Law Office and the petition was filed through Advocate Milind Kumar.