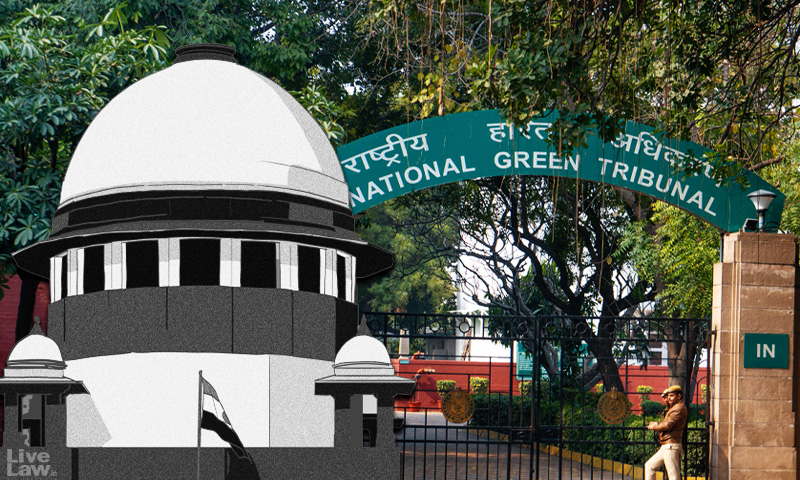 The Supreme Court on Wednesday concluded hearing oral submissions from concerned parties pertaining to a batch of petitions on the issue whether the National Green Tribunal (NGT) has jurisdiction under the provisions of the National Green Tribunal Act, 2010 (NGT Act) to initiate suo motu proceedings based on a letter or a newspaper report. The Apex Court also directed the parties to file...

The Supreme Court on Wednesday concluded hearing oral submissions from concerned parties pertaining to a batch of petitions on the issue whether the National Green Tribunal (NGT) has jurisdiction under the provisions of the National Green Tribunal Act, 2010 (NGT Act) to initiate suo motu proceedings based on a letter or a newspaper report. The Apex Court also directed the parties to file their additional written submission if any, within a period of 1 week.

On Wednesday a Bench comprising Justices AM Khanwilkar, Hrishikesh Roy and CT Ravikumar heard extensive arguments from senior counsels Sanjay Parikh and Gopal Sankaranarayanan contending that the NGT can exercise suo moto powers in taking cognisance of environmental cases affecting the public at large even in the absence of a formal application.

The cases being adjudicated upon are:

1. An appeal filed by the Municipal Corporation of Greater Mumbai against an order of the NGT on waste disposal passed on the basis of an article published in 'The Quint'.

2. Batch of appeals arising from an order passed by the NGT on the basis of a letter representation increasing the minimum distance rule for quarries in Kerala as 200 meters from 50 meters from residential units. The Kerala High Court had held that NGT has suo motu jurisdiction; however it limited the operation of the order to new quarries and allowed existing quarries to operate as per earlier distance limit till the term of their license.

Senior counsel Sanjay Parikh asserted before the Court that the nature of jurisdiction conferred upon the NGT differs from other tribunals as the NGT has to uphold not only national statutory commitments but also international commitments as envisaged in international covenants such as the Stockholm Convention. He further argued that a 'lis' or a dispute would also include within its ambit a public injury pertaining to the environment.

"Environmental injury will be a cause of action even in the absence of statutory provisions", the senior counsel submitted. He further averred that the NGT has been assigned the duty to protect rights under Article 21 and that protection of such a fundamental right also forms a part of customary international law.

Highlighting the need for suo moto powers to be reposed in the NGT in the interest of justice, the senior counsel argued.

"If you look at the PILs filed in environmental matters, in most cases someone is aggrieved by a public injury so the Supreme Court and the High Courts are approached. However, the superior courts can say that we cannot deal with this matter because it calls for some form of expertise", senior counsel Parikh remarked.

He further placed reliance on the Supreme Court judgment in S.P Gupta v. Union of India to contend that it is the duty of environmental courts to take cognisance of environmental matters causing public injury. "It is a question of rule of law, whether it can go unremedied?", the senior counsel added.

However, he cautioned that the NGT must not rely on newspaper reports unless they are authenticated. Whether the information in the report is authentic, it has to be decided by the Tribunal, he contended.

Reliance was also place on Section 15(1) of the NGT Act which grants the NGT the power to provide relief, compensation and restitution. The senior counsel contended that the provision does not make the filing of an application necessary which goes on to show that 'discretion has been provided to the NGT to assess damage to public health'.

On the last date of hearing, the Bench had posed a question to the senior counsel enquiring, "what happens to the restitution powers of the Tribunal when there is an Act of God, suppose there is an earthquake?"

Responding to the query on Wednesday, the senior counsel referred to the Supreme Court judgment in Alaknanda Hydro Power Company v. Anuj Joshi wherein the Supreme Court had taken suo moto cognisance of the 2013 Kerdarnath tragedy and had proceeded to issue a host of directions regulating various hydroelectric projects in the area to prevent the occurence of similar incidents of cloudburst and flooding. Thus, he argued that the NGT must be vested with similar powers to ensure 'restitution of environment' pursuant to government inaction.

He further argued that although preceding legislations such as the National Environment Appellate Authority Act, 1997 had explicitly conferred suo moto powers, this was not done in the NGT Act as the Parliament had conferred wide ranging powers under Section 14 and Section 15 to take suo moto cognizance of matters.

To this, the Bench enquired from the senior counsel, "If we say that one is supposed to do restitution/compensatory exercise, is the NGT expected to be triggered by a third party? Can the NGT be expected to wait for an application? Or can the NGT take self cognisance in the interest of restitutive justice?"

In response the senior counsel submitted that the NGT must be allowed to take self cognisance of such matters to prevent further damage to the environment. The conscience of the tribunal must be moved by the tragedy, he added further.

The Bench further posed the following questions, "NGT is the only authority to deal with environmental matters, can it be said that it has no self cognisance right especially when there is no application? Whether the particular cause of action is sufficient to trigger the jurisdiction of the Tribunal?"

NGT has been conferred with powers to safeguard Article 21: Gopal Sankaranarayanan

Senior counsel Gopal Sankaranarayanan referred to the Supreme Court judgment in Director General, NHAI v. Aam Aadmi Lokmanch to contend that the NGT has been conferred with the power of 'restitution of the environment'. He also contended that the Tribunal is an 'expert regulatory body' and not just an adjudicatory body.

Relying on a host of other Supreme Court cases, the senior counsel argued that NGT has the power to 'monitor and provide solutions..it is not just about disposing of cases as a matter of lis'. Agreeing with this contention, the Bench remarked, "That is why the phrase used in the statute is 'settle'".

He further submitted that the intention behind establishing the NGT was to reduce the burden on Constitutional Courts and that the Tribunal is not merely a substitute for a civil court.

"In many places in the statute, the words application or appeal are not mentioned..it was a deliberate intention of the Parliament", the senior counsel added. He further contended that Section 14(1) of the Act which lays down the instances when the jurisdiction of the Tribunal can be triggered, does not envisage the requirement of an 'application or an appeal'.

Referring To Section 19(4)(j) of the Act which permits the NGT to 'pass an order requiring any person to cease and desist from committing or causing any violation of any enactment specified in Schedule I', the senior counsel pointed out to the Court that the provision does not include the phrase 'application or appeal'.

Furthermore, he also pointed out to the Court that Rule 20 of the NGT (Practice and Procedure) Rules, 2011 allows the Tribunal to decide a matter on merits even in the absence of an application.

"It is the flavour of Article 21 power that there has to be suo moto powers', the senior counsel concluded.

For report of hearing of Day 1: Can NGT Take Suo Motu Cognizance Based On A Letter Or News Report? Supreme Court Starts Hearing

For report of hearing of Day 2: If NGT Acts On A Letter Representation, Will It Be A Suo Motu Case? Supreme Court Asks