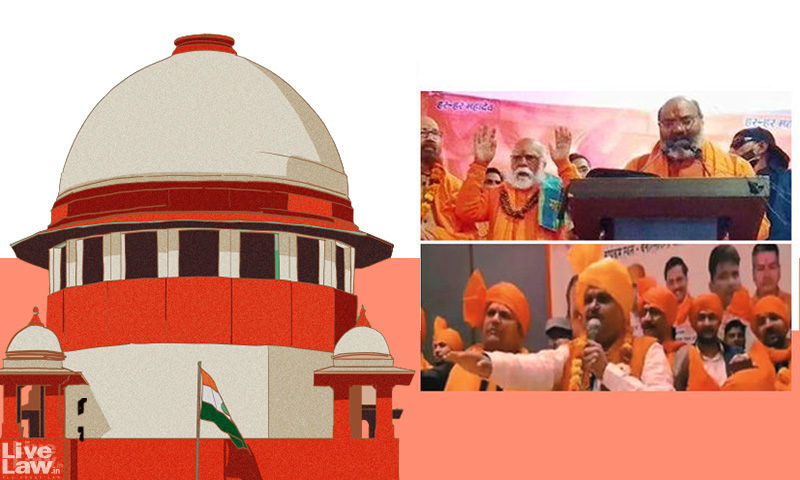 "They are spoiling the whole atmosphere", the Supreme Court of India remarked on Thursday while hearing plea filed by Jitendra Tyagi alias Vasim Rizvi seeking bail in the case related to alleged hate speech made at the Dharam Sansad held at Haridwar in December 2021.

"Before they ask to sensitise others they've to sensitise themselves first. They're not sensitised. This is something which is spoiling the whole atmosphere" the bench remarked apparently referring to the controversial Haridwar Dharam Sansad.

A bench comprising Justices Ajay Rastogi and Vikram Nath issued notice in the special leave petition filed by Tyagi challenging the March 8 order of the Uttarkhand High Court which denied him bail.

The bench has sought the State's response and directed the State of Uttarakhand to file a counter affidavit in the matter.

"File the counter. We are not concerned about what happened, we've to take the totality of matter, punishment, period of custody, etc. what further do you want. Tell us that", the bench told the State Counsel.

During the hearing today, the bench was at the outset informed by Senior Counsel Sidharth Luthra appearing for Tyagi that the accused has already been in custody for almost 6 months and is facing medical issues.

"What is the Dharam sansad by the way" the bench asked Mr Luthra.

Responding to the court's query Mr Luthra said "I am an Arya Samaji, I don't know. I've seen videos, people in Bhagwa kapdas got together and gave speeches"

"I bow down. We need to be sensitive to people, nation and our citizens, I understand", Mr Luthra said.

The bench however noted that the maximum sentence for the offence that the accused is charged with is 3 years and he has already been in jail for 4 months.

"Maximum punishment is 3 years, he has been in jail since January. For 4 months he's already been in custody. What further investigation you'd like to be made him? It is already complete", the bench said.

The Counsel appearing for the complainant submitted that what is concerning is that the accused is hell bent on showing that he is not afraid of law and will continue to do this. Further, he submitted that this was not an isolated incident and the accused made another video after the first one.

The bench then asked the Deputy Advocate General for Uttarakhand present in the court to take notice and submit the state's response. The matter will be heard next on 17th May 2022.

He was arrested on January 13 this year in a case registered for offences under Section 153A and 298 of the Indian Penal Code. A single bench of Justice Ravindra Maithani refused him bail observing that he had made hugely derogatory remarks. "The Prophet has been abused; it intends to wound the religious feelings of persons belonging to a particular religion; it intends to wage war. It promotes enmity. It is a hate speech," the Court said.

Jitendra Tyagi, who was formerly known as Wasim Rizvi, was once the Chairman of the UP Shia Waqf Board. In December last year, he converted to Hinduism and accepted the name Jitendra Narayan Singh Tyagi.