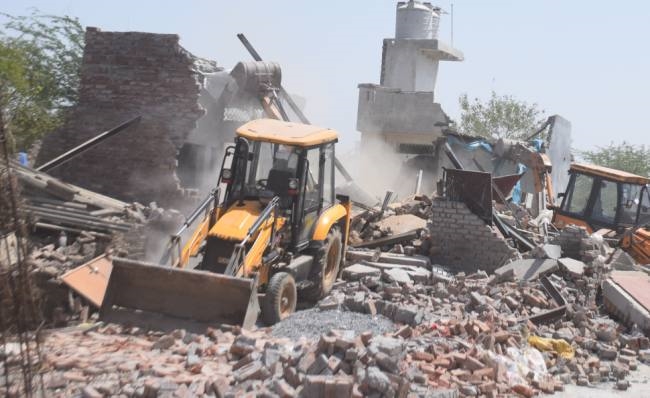 x
Supreme Court reiterated that the Corporation is expected to complete the removal of unauthorised structures on forest land before 23rd August.

The Supreme Court on Tuesday asked the State of Haryana to expedite the consideration of the draft policy of rehabilitation submitted by the Municipal Corporation of Faridabad with respect to the demolitions carried out in the Khori Gaon forest land, and take a final decision preferably before August 25th (next date of the hearing). A Division Bench of Justice AM Khanwilkar...

The Supreme Court on Tuesday asked the State of Haryana to expedite the consideration of the draft policy of rehabilitation submitted by the Municipal Corporation of Faridabad with respect to the demolitions carried out in the Khori Gaon forest land, and take a final decision preferably before August 25th (next date of the hearing).

A Division Bench of Justice AM Khanwilkar and Justice Dinesh Maheshwari reiterated that the Corporation is expected to complete the removal of unauthorised structures on forest land before 23 August and asked the Commissioner to submit further status report before 25th August, 2021.

The Court has also asked the Commissioner of the Municipal Corporation to consider setting up of an extended office at Radha Saomi complex where the locals have been provided temporary food, shelter and accommodation, to assuage the grievance of the locals and enable them to avail facilities made available in terms of Court's order.

The Bench has also asked the Commissioner to briefly indicate outcome of representations regarding rehabilitation that would be made by Senior Advocate Colin Gonsalves before the Commissioner.

"Why Should Those Not Eligible Be Rehabilitated? They Are Encroachers" : SC

Supreme Court orally observed that State of Haryana cannot rehabilitate those who are not eligible to get accommodation as per its new policy, as they are encroachers and land grabbers.

"Those who are eligible, who are likely to get accommodation as per new policy, they have right to be rehabilitated and must be considered, we can understand that. But those who are not eligible why should they be rehabilitated by state? They are all encroachers and land grabbers?" the Bench said.

It observed that the State has said that it can provide rehabilitation to those who contact them for the same, and cannot go after every person to rehabilitate. The Bench also stated that arrangements are being made by the Municipal Corporation for those who are likely to get benefit of new policy and can be availed by them.

"Let action be taken then we will go into each aspect of it. Commissioner is there, and he will submit a status report, indicating representations received and resolved." the Bench said.

The observations were made after Senior Counsel Colin Gonsalves, appearing for one of the petitioners, submitted before the Court that Rehabilitation is hardly being done by the State.

"If Radha Saomi Centre is On Forest Land, It Has To Go" : SC

During the hearing, Senior Counsel Sanjay Parikh appearing for one of the petitioners informed the Court that the temporary accommodation is being provided by the State at Radha Saomi or Red Cross Centres and the capacity there is not much. He also submitted that even Radha Saomi is in the forest area.

"There are no provision for food or water. These people have been ousted but their live and livelihood should be taken care of. The State is washing their hands off by saying go to Radha Saomi" , he said.

Senior Advocate Arun Bhardwaj for the Corporation however objected to Mr Parikh's statement. He said that essential facilities have been made available. He also said that Radha Saomi and Red Cross are adjacent to Khori Gaon and are not in the forest area.

In response to the contradicting statements made by the Counsels regarding the Radha Saomi Centre being on forest land, the Bench remarked that,

"Look at the way things are being presented before us. You are saying it's in forest area, he is saying it's in neighbourhood. If you want relief from the Court make correct statements. Those who are giving instructions must know this, they can't walk away making statements like these"

Bhardwaj submitted that Facilities for food, water, corona testing, trucks for removal of debris have been provided. He further ensured that in case there is any grievance of any particular person they can approach the Commissioner and food and shelter, etc. will be given.

At this juncture, Advocate Srishti Agnihotri pointed out to a NGT report which identifies the Radha Saomi land as being on Forest land.

Mr Bhardwaj submitted that he will verify if the Centre is on forest land.

In response to Mr Gonsalves' submission that Farm Houses need to be demolished as well, the Bench replied:

During the hearing, Senior Advocate Arun Bhardwaj, AAG for Haryana, appearing for the Corporation, informed the Court about the status of the scheme directed by the Court to be finalised. He stated that it was finalised after considering all the suggestions and Municipal Corporation has sent the same to the State.

Advocate Ruchi Kohli appearing for the State of Haryana informed the Court that they will need another 2-3 weeks to finalise policy as objections are yet to be invited.

Senior Advocate Sanjay Parikh appearing for the petitioner submitted that while a new policy has been prepared and given to State by Corporation, virtually there is no change in the situation. The eligibility criteria has ousted 90% of the people, as requirements like having an electricity bill, being a voter of a particular constituency etc. are being specified.

The Bench however asked the Counsel to let State take the final decision first, and added that the final policy can be challenged before the Court, and the justness of policy can be tested.

Supreme Court had on July 23rd granted four more weeks to the Municipal Corporation of Faridabad to complete the removal of unauthorised constructions on forest land in Khori Gaon in Faridabad, Haryana.

On 7th June 2021, the Supreme Court had directed the removal of all encroachments on forest land within 6 weeks in a plea seeking a stay on the demolition of 10,000 houses that has been planned by the Municipal Corporation of Faridabad at Khori Gaon in Faridabad, Haryana.

A Bench headed by Justice AM Khanwilkar had heard the plea which has been filed by 10,000 families living in the Khori Gaon who had challenged the Haryana Shehri Vikas Pradhikaran Rehabilitation Policy to the extent that it limited the cut-off for rehabilitation to 2003, and directed for a report of compliance under the signature of the Chief Secretary and Secretary of Haryana Forest Department to be provided.

"After the certificates are provided, we will determine our own factual position. We make it clear that MCF will proceed as stated in February 2020 order and State will give necessary logistical support to enable corporation to fully evict the occupants on forest land and clear the encroachments", directed the Court.

The Supreme Court further directed the DCP of Faridabad to provide police protection to the corporation officials. It did, however, noted that the relief claimed by the Petitioners could be considered de hors the compliance given in the earlier February 2020 order.

The Court also noted that,

"We make it clear that if the certificate does not portray it truthfully that the forest land has been cleared, there will be contempt action. We have asked the Secretary of Forest Department to reply now. Next, the Chief Secretary of Haryana will be responsible for this".