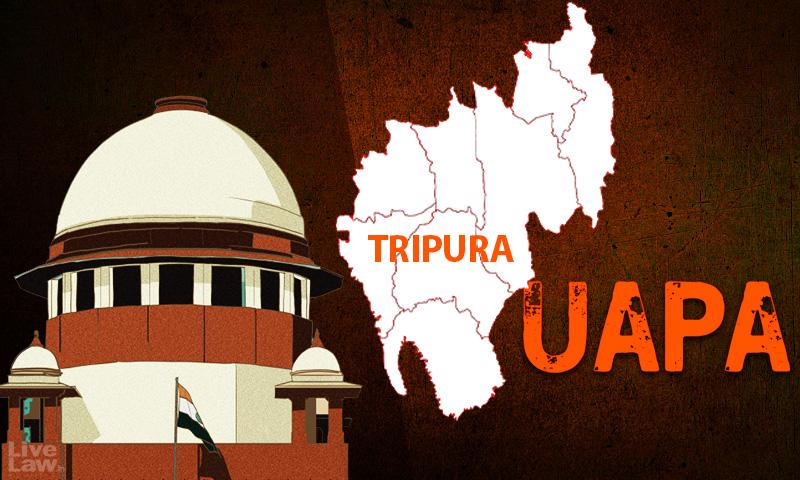 The Supreme Court on Wendesday ordered that no coercive steps including arrest should be taken against two lawyers and one journalist, who were booked under the draconian anti-terror law Unlawful Activities Prevention Act (UAPA) by the Tripura police over their social media posts and reports about the recent communal violence which took place in the state.A Bench comprising the Chief Justice...

The Supreme Court on Wendesday ordered that no coercive steps including arrest should be taken against two lawyers and one journalist, who were booked under the draconian anti-terror law Unlawful Activities Prevention Act (UAPA) by the Tripura police over their social media posts and reports about the recent communal violence which took place in the state.

Advocate Prashant Bhushan, appearing for the petitioners, submitted that the two lawyers had visited Tripura and published a fact-finding report about the communal violence, which led to the Tripura police issuing notices under Section 41A of the Code of Criminal Procedure against them asking their appearance for interrogation in relation to the FIR under UAPA.

At this point, the CJI observed that he read some news reports that the journalists were granted bail in the Tripura FIRs. Mr.Bhushan clarified that they were two other journalists, and the petitioners are yet to be arrested.

The bench then ordered notice on the petition and directed that no coercive steps be taken against the petitioners.

The petitioners have also challenged the constitutional validity of Section 2(1)(o)(which defines "unlawful activity), Section 13(punishment for unlawful activity) and 43D(5) (restrictions on grant of bail) of the Unlawful Activities Prevention Act.

The petition was listed after a request seeking urgent hearing was made before a Bench headed by the Chief Justice of India NV Ramana by Advocate Prashant Bhushan on behalf of the petitioners.

The West Agartala Police served notices to Delhi-based human rights lawyers Mukesh of Peoples Union for Civil Liberties and Ansar Indori of National Confederation of Human Rights stating that a case has been registered against them under Section 13(punishment for unlawful activities) of the UAPA over their social media posts and statements.

A day before the notice, the lawyers had held a press conference, which was streamed through Facebook live, to release the fact-finding report titled "Humanity under Attack in Tripura #MuslimsLivesMatter", which mentioned the attacks on 12 masjids, 9 shops and 3 homes belonging to Muslims. Supreme Court lawyer Ehtesham Hashmi led the fact-finding team. Advocate Amit Srivastav(Coordination Committee , Lawyers for Democracy)was the other member of the team.

The fact-finding team demanded the constitution of an inquiry committee headed by a retired High Court judge to investigate the incidents, compensation to victims, reparation of damaged religious places etc. Significantly, the team had also demanded strict action against people and organizations who made provocative and false posts in social media to incite people.

In the notice, the West Agartala Police stated that a case has been registered against Advocates Mukesh and Ansar Indori "against the social media posts circulated by you/ statements made by you for promoting enmity between religious groups as well as provoking the people of different religious communities to cause beach of peace".

The police asked them to "immediately delete these fabricated and false statements/comments made/circulated by you in social media", though the notice did not specify which were those social media posts. Further, Mukesh and Indori were asked to appear before the Sub-Inspector of Police, West Agartala Police Station on November 10.

The notice sent under Section 41 of the Code of Criminal Procedure mentioned these IPC offences as well - Sections 153A/153B ( Promoting enmity between different groups on grounds of religion, race, place of birth, residence, language, etc), 469 (forgery for purpose of harming information), 503 (criminal intimidation), 504 ( (intentional insult with intent to provoke the breach of peace) and 120B (punishment for criminal conspiracy).

(Mukesh & Ors vs State of Tripura)