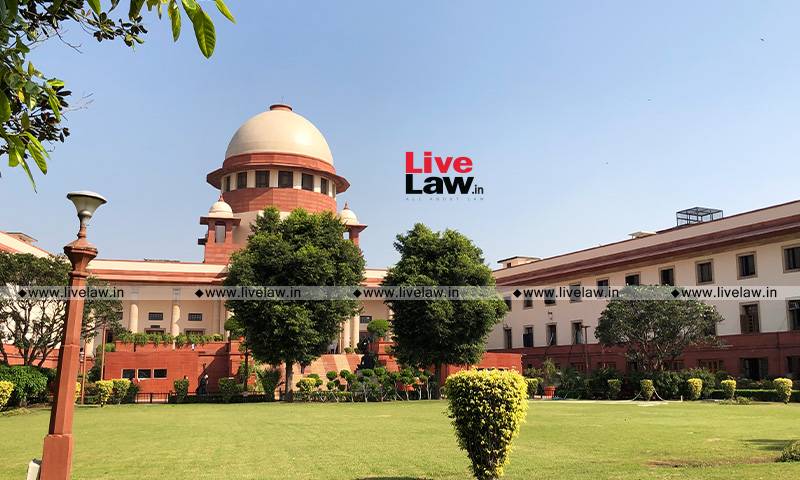 The Supreme Court on Friday ordered the relase of a 62-year old man named Mohammad Qamar, who has been under detention in a Foreigners Detention Centre since 2015 on being adjudged that he belonged to Pakistan and that he was not an Indian citizen.The Court directed the Union Government to take a decision on granting him Long Term Visa. The Union's decision should be placed before the...

The Supreme Court on Friday ordered the relase of a 62-year old man named Mohammad Qamar, who has been under detention in a Foreigners Detention Centre since 2015 on being adjudged that he belonged to Pakistan and that he was not an Indian citizen.

The Court directed the Union Government to take a decision on granting him Long Term Visa. The Union's decision should be placed before the Court within 4 months.

The Court released him on condition to furnish a personal bond of Rs 5000 and two sureties of the like amount and his permanent address in Meerut where he proposes to stay. He is directed to report to the local police station seventh day of every month.

Although he had in 2015 completed his setence of three years imprisonment imposed on him by a Magistrate under the Foreigners Act, he was lodged in the Detention Centre at Delhi as Pakistan refused to accept him as its citizen.

In this background, his children filed a habeas corpus petition in the Supreme Court seeking his release

A bench comprising Justices DY Chandrachud and Hima Kohli took note of the fact that Md.Qamar had married an Indian citizen and the five children born in the wedlock are Indian citizens. The bench also noted that no material has been produced by the Union on record to show that the person presented any security threat.

It further noted that the statement of the Ministry of Home Affairs that though Pakistan was given consular access to the detenu twice in 2019, the Pakistan government is yet to confirm his nationality which is necessary for his deportation.

The bench led by Justice Chandrachud on the previous hearings had repeatedly observed that there cannot be an indefinite detention of the person and had asked the Union Government to find a resolution to the issue.

Additional Solicitor General KM Nataraj, appearing for the Union Government, told the bench today that the State of Uttar Pradesh had recommended against granting him Long Term Visa, on its views being sought by the Ministry of Home Affairs.

Senior Advocate Garima Prashad, appearing for the State of UP, submitted that the Senior Superintendent of Police, Meerut, had reported that there is no justification for the detenue to stay in India as he had divorced his wife around 10 years ago.

However, the bench noted that there is nothing on record to show the divorce. Also, all his 5 children, who are admittedly Indian citizens, are staying here. Further, 7 years have elapsed since he has served out his sentence under the Foreigners Act.

In this backdrop, the bench said : "We are of the view that keeping the detenu in detention would not be apt in facts and circumstances of the present case since nothing is brought on record regarding any security threats or adverse inputs".

The bench expressed the view that the Ministry of Home Affairs should take a fresh decision on the representation seeking LTV. The decision should be independent of the report of SSP Meerut, the bench added.

Senior Advocate Sanjay Parikh, appearing for the petitioner, submitted that while the persons who have been under detention in the Assam Foreigners Tribunal for over 2 years were relesed, similar relaxation was not extended to persons alleged to be Pakistani nationals, and this amounted to discrimination.

"Now the question is...whether you can treat them them separately. People after 2 years of detention have been released and the person here has been in detention for 7.5 years", Parikh submitted.

ASG Nataraj submitted that the detenue, as a Pakistan national, cannot claim the fundamental rights under Article 19 and 21. When the UP Government told the bench that he has no justification to stay in India as he has divorced his wife and that his children have not been staying with him for the past 15 years, Justice Chandrachud remarked, "The question is not that whether the children need him but at 69 years, if he needs his children".

"Where will you push him? Pakistan does not want him also", Justice Chandrachud asked. The judge also pointed out that no adverse perception on national security has been brought on record.

Though Parikh raised a plea of citizenship, the bench advised him not to press that argument and added that the best possible relief in the case has been granted. The bench pointed out that it was undisputed that he had arrived in India on a Pakistani passport.

Brief background of the case (as extracted from the petition)-

The petition was filed by the children of the detenu(Mohd.Qamar @ Mohd.Kamil) seeking his release from the detention camp.
It is submitted that Mohd. Qamar @ Mohd. Kamil was born in India in year 1959. He had gone with his mother from India to Pakistan as a child of around 7-8 years old in 1967-1968 on a Visa visit to meet his relatives. However, his mother died there, and he remained in Pakistan in care of his relatives. When he attained adulthood, he came to India on a Passport of Pakistan in around 1989-1990. Here he married one Shehnaaj Begum, an Indian citizen, in Meerut, Uttar Pradesh. In this wedlock, five children were born, including the petitioners.
However, Mohd. Qamar @ Mohd. Kamil has no documentary proof to show that he had gone with his mother to Pakistan in around 1967-68 and his mother died there and therefore, his story has not been believed. Nevertheless, the undisputed fact is that he came to India around 1989-90 on a passport of Pakistan and did not renew his Visa due to the lack of education and subsequently, got married here. He was doing the job of a laborer on 'Khairat' machines and other menial jobs and continued to reside in Meerut, Uttar Pradesh along with his family.
That the family of Mohd. Qamar has been residing in Meerut, Uttar Pradesh and his wife i.e. Shehnaaj Begum has been issued Aadhar Card by the UIDAI, Government of India. In addition, his two sons and three daughters were also born in India and are of Meerut, Uttar Pradesh and citizens of India.
Mohd. Qamar, father of the Petitioners was arrested on 08.08.2011 on a complaint at Khair Nagar, Meerut, Uttar Pradesh. As mentioned above, he was prosecuted under section 14 of Foreigners Act on the basis of an FIR No. 250 of 2011, P.S. Delhi Gate, Meerut. The principal allegation was that Mohd. Qamar was residing in India after expiry of his Visa. He was convicted in the Criminal Matter 1410 of 2012 on 02.09.2014 and sentenced for simple imprisonment of 3 years and 6 months and a fine of Rs. 500/-.
He completed his sentence on 06.02.2015 and was sent to Detention Centre at Lampur, Narela, Delhi on 07.02.2015 for deporting him to Pakistan. However, the Government of Pakistan did not accept his deportation to Pakistan and he is still languishing at the Detention Centre for the last 7 years.