Supreme Court Constituted Committee Finds Malware In 5/29 Devices Though Not Clear If Its Pegasus; Says Centre Did Not Cooperate 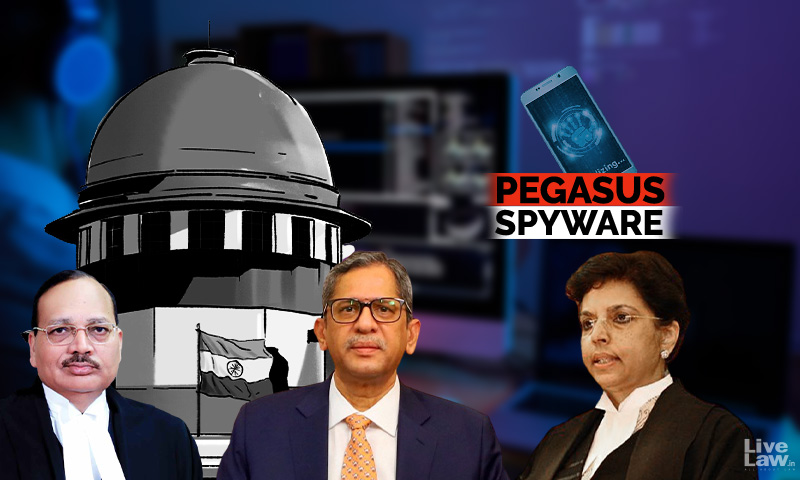 The Supreme Court on Thursday took on record the sealed cover report submitted by the independent committee probing the allegations of illegal surveillance using Pegasus spyware.A bench comprising Chief Justice of India NV Ramana, Justice Surya Kant and Justice Hima Kohli orally remarked that Government of India did not cooperate with the Committee and that the Government followed the...

The Supreme Court on Thursday took on record the sealed cover report submitted by the independent committee probing the allegations of illegal surveillance using Pegasus spyware.

A bench comprising Chief Justice of India NV Ramana, Justice Surya Kant and Justice Hima Kohli orally remarked that Government of India did not cooperate with the Committee and that the Government followed the same stand which it took before the Court as well, whereby it refused to clearly state if the spyware was purchased or not.

"One thing committee has said, Government of India has not cooperated. The same stand you took here, you have taken there..." CJI Ramana told Solicitor General Tushar Mehta.

Solicitor General said that he is not aware of that.

The bench also noted that the Technical Committee found malware in 5 of the 29 devices that were submitted to it. However, it is unclear whether the malware was in fact Pegasus. Moreover, members who had submitted their phones had made a request to not release the report. Thus, the Supreme Court has expressed its disinclination to bring the report in public domain and said that it will consider whether a redacted version can be made available.

The bench however said it will publicise the report submitted by the overseeing Judge, Justice RV Raveendran, who submitted suggestions on protecting citizens, future course of action, accountability, amending the law to improve privacy protection, grievances redressal mechanism, etc.

"It is a huge report, let us see what portions we can give...These are technical issues. So far as Raveendran's report we will upload in website. No problem..." CJI Ramana said.

However, in the order passed later in the day, the bench decided to keep both the reports sealed.

"The sealed covers were opened in the Court and we read out some portions of the said Reports. Thereafter, the Reports were re-sealed and kept in the safe custody of the Secretary General of this Court, who shall make it available as and when required by the Court", the Court stated in the order.

The case will be listed after four weeks.

The technical committee submitted its report in 3 parts. It contains information about malware, public research material, material extracted from private mobile instruments which may contain confidential information, etc. Thus, the Committee has cautioned that the report is confidential and is not for public distribution.

A file containing the responses received to the queries of committee was also submitted before the Court.

The bench was considering a batch of petitions seeking independent probe into the allegations of targeted surveillance of journalists, activists and politicians using the Israeli spyware Pegasus.

In October 2021, the Court had constituted an expert panel headed by former Supreme Court judge Justice RV Raveendran to probe the matter.

The Court constituted the probe committee after making a prima facie finding that the petitioners had established a case and that the Centre failed to give clarity in the matter.

'Beating About The Bush Won't Solve The Issue' : Supreme Court To Centre In Pegasus Case

In a judgment emphasising the importance of free speech and press freedom and expressing concerns about unauthorised surveillance, the bench led by CJI NV Ramana stated that national security ground raised by the State cannot totally exclude judicial review.

The Central Government had refused to disclose whether it had used Pegasus spyware by stating that it was a national security issue. Rejecting the Centre's defence, the Court said that mere invocation of national security can't give the State a free pass. The Court also rejected the Centre's proposal that it can form a technical committee by saying that an independent committee was required to ensure impartial probe.