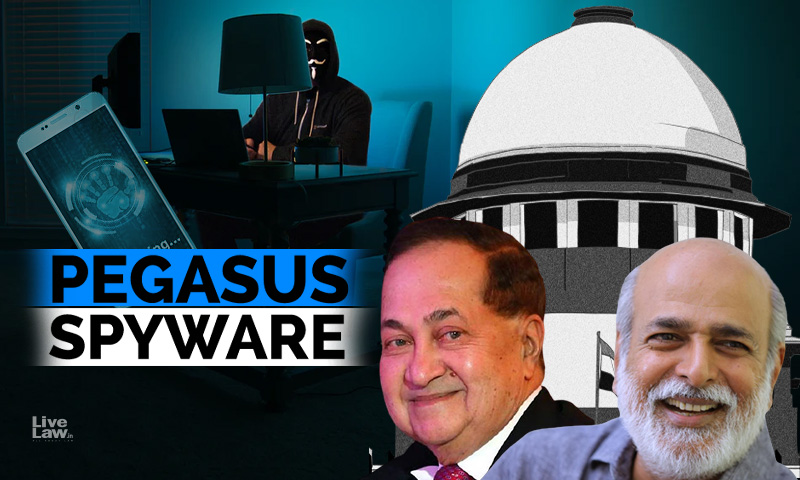 Senior Journalists N Ram and Sashi Kumar have approached the Supreme Court seeking a direction for an independent inquiry headed by a sitting or retired judge of Supreme CourtCourt to probe into allegations that illegal surveillance has been carried out on inter alia journalists, lawyers, government ministers, opposition politicians and civil society activists using the Pegasus...

Senior Journalists N Ram and Sashi Kumar have approached the Supreme Court seeking a direction for an independent inquiry headed by a sitting or retired judge of Supreme CourtCourt to probe into allegations that illegal surveillance has been carried out on inter alia journalists, lawyers, government ministers, opposition politicians and civil society activists using the Pegasus spyware

The Petitioners submitted that global investigation involving several leading publications around the world (including inter alia The Guardian (UK), Le Monde and Radio France (France), The Washington Post and Frontline (USA), Haaretz (Israel) and the Wire (India)) has revealed that more than 142 (one hundred and forty-two) persons, including journalists, lawyers, government ministers, opposition politicians, constitutional functionaries and civil society activists from India have been identified as potential targets for surveillance using Pegasus software.

The Petitioners also seek a direction to Union of India to disclose if the Government of India or any of its agencies have obtained license(s) for Pegasus spyware and/or used/employed it, either directly or indirectly, to conduct surveillance in any manner whatsoever

According to the petitioners the forensic analysis of several mobile phones belonging to persons targeted for surveillance by the Security Lab of Amnesty International have confirmed Pegasus-induced security breaches.

These circumstances give rise to several serious questions, including inter alia:

* What are the implications of such a hack? Do they represent an attempt by agencies and organisations to muzzle and chill the exercise of free speech and expression of dissent in India?

The petition has been preferred mainly on the  following grounds:

1. The targeted surveillance using military-grade spyware is an unacceptable violation of the right to privacy which has been held to be a fundamental right under Articles 14, 19 and 21 by Supreme Court in K.S. Puttaswamy v. Union of India (2017) 10 SCC 1.

2. The targeted hacking/interception of inter alia journalists, doctors, lawyers, civil society activists, government ministers and opposition politicians seriously compromises the effective exercise of the fundamental right to free speech and expression under Article 19(1)(a). It has an obvious chilling effect on expression by threatening invasion into the most core and private aspects of a person's life..

"The specific targeting of scores of journalists is an attack on the freedom of the press, and seriously abridges the right to know, which is an essential component of the right to free speech and expression"

3.Legal regime for surveillance under Section 5(2) of the Telegraph Act has been completely bypassed in the present case. Surveillance/interception is justified only in cases of public emergency or in the interests of public safety, and the existence of such conditions must be inferred reasonably and cannot be determined solely on the assessment of the government (see Para 28, PUCL v. Union of India (supra)). Neither of these mandatory conditions have been met in the present case, rendering the surveillance wholly illegal.

4. The hack/interception/decryption occasioned by the Pegasus spyware constitutes a criminal offence punishable under interalia Section 66 (computer related offences), 66B (punishment for dishonestly receiving stolen computer resource or communication device), 66E (punishment for violation of privacy) and 66F (punishment for cyberterrorism) of the IT Act, punishable with imprisonment and/or fine. The attack prima facie constitutes an act of cyber-terrorism that has several grave political and security ramifications, especially considering that the devices of government ministers, senior political figures and constitutional functionaries which may contain sensitive information have been targeted.