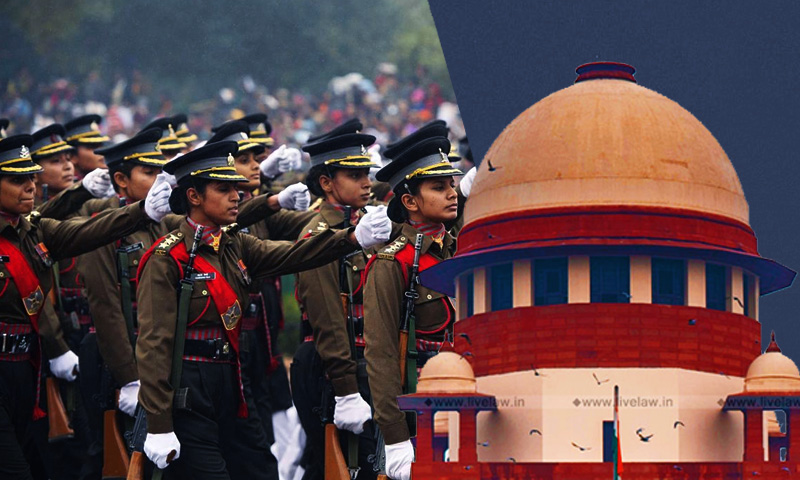 The Supreme Court on Friday directed that there shall be no immediate release until the next date of hearing of the women officers of the Indian army who have moved the Court claiming that they have been denied Permanent Commission in violation of the March judgment of the Court.The bench of Justices D. Y. Chandrachud and B. V. Nagarathna acceded to the request of the Centre for a...

The Supreme Court on Friday directed that there shall be no immediate release until the next date of hearing of the women officers of the Indian army who have moved the Court claiming that they have been denied Permanent Commission in violation of the March judgment of the Court.

The bench of Justices D. Y. Chandrachud and B. V. Nagarathna acceded to the request of the Centre for a short adjournment to consider the grounds for rejection of PC of each of the petitioners following the judgment of the Court and directed it to file by October 8 an affidavit explaining the position.
In March, another bench headed by Justice Chandrachud had held in Lt. Col. Nitisha's case that all women officers who have satisfied the 60% cut-off are entitled to PC subject to satisfaction of medical criteria as given below and satisfaction of vigilance and disciplinary clearance.
On Friday, it was the contention of the petitioners, represented by Senior Advocates V. Mohana, Meenakshi Arora and Hufeza Ahmedi, that by the results declassified 2 days ago, it has been revealed that they have been denied PC despite securing above 60%, being medically fit and having vigilance clearance, on account of additional criteria of "discipline, disobedience of orders, lapses in government procurement, forging medical documents, poor work ethics, lack of professionalism, un-officer like conduct, poor performance in courses etc"
It was urged that even after the judgment of March, the 72 petitioners have been declared unfit and incompetent for PC and their claim rejected based on a September 2020 assessment by the Selection Board that had allegedly found charges on the above grounds against the petitioners.
It was pointed out that the Indian Army has sought a clarification from the Supreme Court on the grant of permanent commission to women short service commission officers, indicating that some of them failed this one criterion and whether the ruling of March meant PC had to be granted irrespective of the criteria being met. The petitioners' senior advocates submitted that the Supreme Court had in August dismissed the said Miscellaneous Application for clarification, with Justice Chandrachud telling the Centre, "You implement the judgment as it stands. This is an attempt on the part of your client to go around the judgment".
"Now in the order declassified day before yesterday, they have reiterated their September 2020 decision to deny PC to these 72 officers for being unfit, when Your Lordships' March judgment made it very clear that other than 60%, medical fitness and vigilance clearance, there can be no other grounds for denial of PC! And this after Your Lordships even refused to entertain their clarification application on this behalf! There was no court of inquiry, no show cause notice, no medical reason, and they say they have found us incompetent for PC based on their September 2020 examination! This is very unfair! This is contempt, a gross violation of Your Lordships' very considerate judgment! The judgment took us one step ahead in women empowerment, now this action has set back 3 steps!", it was argued.
When Justice Chandrachud asked ASG Sanjay Jain "what is happening", he replied, "If 72 officers have been found unfit, there will be 72 different reasons. There cannot be 1 common reason running across all rejections. It is my understanding that this decision was independent of the earlier decision, keeping in view Your Lordships' judgment. It is my understanding the exceptions in Your Lordships' judgment cover this decision. Please grant us some time so that we can examine the 72 files and place the facts and figures before Your Lordships. Please have this matter immediately after the Dussehra break"
"When we learnt about this, we also tried to approach it in such a manner that each case has to be seen on the touchstone of Your Lordships' order. Nothing has changed. We are following the 1983 policy. But if anything is amiss, we will place it before the Court", the ASG added.
Senior Advocate R. Balasubramanian, for the army, also backed the ASG's submission- "It is only in November that 25 of these 72 officers may be released from service. Please give us some time and let us place the facts and figures as to why this was done."
The bench then listed the matter after 1 week, that is October 8, for Mr Jain and Col. Balasubramanian to examine the files, prepare a chart of the grounds for each of the petitioners and file a short affidavit explaining the position. The bench also directed that there shall be no immediate release from service until then.
Case Title: Nilam Gorwade & Ors v. Manoj Mukund Naravane & Ors
Tags#Supreme Court #Women In Indian Army Permanent Commission Permanent Commission For Women Officers In Indian Army Lt. Col. Nitisha vs Union of India #Justice DY Chandrachud Justice BV Nagarathna
Next Story
Similar Posts
+ View more
Law Firms
+ More