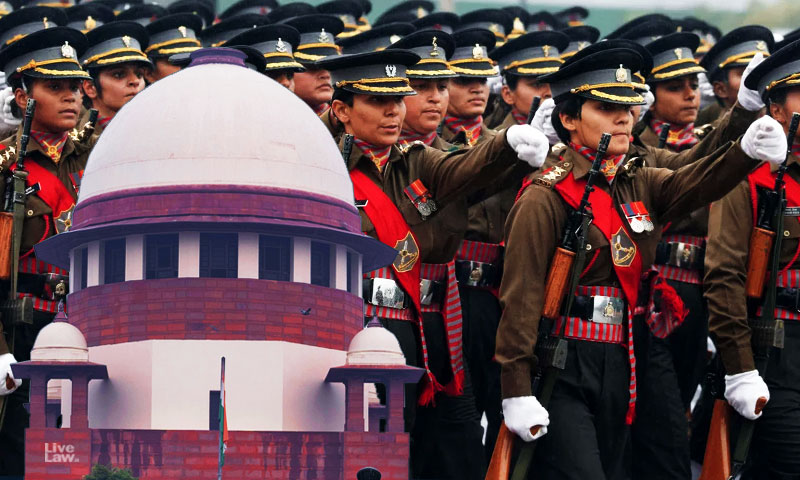 The Supreme Court has denied modification of its last year's judgement granting permanent commission to women officers in the Army, and has directed the officers to approach the Armed Forces Tribunal. The Court observed that suitable remedy for these petitioner officers does not lie before the Supreme Court as a miscellaneous application but as a suitable proceeding before Armed...

The Supreme Court has denied modification of its last year's judgement granting permanent commission to women officers in the Army, and has directed the officers to approach the Armed Forces Tribunal.

The Court observed that suitable remedy for these petitioner officers does not lie before the Supreme Court as a miscellaneous application but as a suitable proceeding before Armed Forces Tribunal where they have liberty to proceed.

A division Bench of Justice DY Chandrachud and Justice MR Shah issued the direction while hearing an application filed women Army officers seeking clarification of its last year's judgement to claim entitlement to consequential benefits of seniority, pay fixation, promotion, etc after having been reinstated in service in terms of the Delhi High Court's order.

The Court considered the request made by the petitioner if the issue involved can be considered without requiring petitioners to pursue another remedy before the Tribunal and asked Senior Advocate Balasubramaniam appearing for the Defence Ministry to consider if their issue can be sorted out and something could be done. In response, Sr Adv Balasubramaniam has stated that if a representation is made before the Administration, it would be duly considered terms of orders given by this court.

During the hearing today, Advocate SS Pandey appeared for the petitioner Officers.

How can we modify our order? the Court remarked.

Advocate Pandey clarified that they are only seeking a clarification and not modification.

"See your prayer, it clearly says you seek modification or clarification and claim benefits in terms of the Delhi HC order"- the Bench said.

The Counsel submitted that the officers retired in 2008 and filed an immediately thereafter. They were already in court in 2009 and the judgement had come in 2010. The petitioners are not asking for back wages but are aggrieved by the administration reducing the seniority by 7 years. Counsel requested the Court to issue one clarification that the petitioners be considered for Para 4 of the High Court's judgement.

Justice Chandrachud stated that he is not in a position to modify one or two lines after one year of the judgement having been passed. However, he observed that the officers seem to have a genuine issue and asked Senior Advocate Balasubramaniam if their issue could solved.

Sr Adv Balasubramaniam appearing for the Defence Ministry submitted that the question of seniority does not even arise in these cases, as one applicant has already been granted permanent commission, and the administration will consider the other questions involved. On the other hand, the other one hasn't even received PC.

Advocate Pandey stated that both the applicants have completed 20 years and the seniority is being reduced by 7 years now!

"She is the senior most officer. First officers of the Army! " Pandey remarked.

Sr Adv Balasubramaniam stated that the issue is not allowing the administration to settle the matter, as there are so many administrative issue. The administration considered officers for PC after Supreme Court's judgement, but they cannot fine a headway, considering so many Cases are being filed.

The applicants through their present miscellaneous application stated that since the time they were reinstated in terms of the Delhi High Court's order, the Army has been maintaining the original seniority of the Applicants thereby giving them the hope that the they would be magnanimous enough to maintain the said seniority even in future but it seems the same was done due to pendency of the matter. The application further stated that since the judgment of Supreme Court did not touch upon the aspect of seniority, the administration has not only formally stopped responding to the representations made by the officers but it has been learnt by the applicants that they are in the process of denying the seniority to the Applicants and two more offices thereby causing grave injustice to the them.

According to the application, if the seniority of the officer is reduced by seven years, it will be totally unfair and inequitable and they will have to suffer the humiliation to work under their juniors in a seniority conscious organisation.

" As a matter of fact the Applicants and two more similarly situated officers in the Indian Army have been made to suffer the ignominy of serving under the Officers much junior to them and the humiliation of this kind in a seniority and Rank conscious organisation like Indian Army." the application read.

The application further stated that the first applicant, Lt. Col. (Retd.) Priamvada A Mardikar after being reinstated the period from Jun 2008 to April 2015 was excluded for all purposes due to unfair condition attached with the order of reinstatement.

According to the applicants, the loss of seniority has a very damaging effect on the Applicants as it is a punishment inflicted to any service personnel for serious misconduct after their trial by Court Martial. The Women Officers like the Applicants have been given such treatment without any fault on their part as the Respondents despite the willingness of the Applicants did not consider them for PC and even after a judgment restoring gender parity in Armed Forces delivered in 2010, the Petitioners have been considered for PC only now and thereby humiliating them all these years by making them serve under their junior and thereafter not restoring back their seniority and other benefits. This amounts to adding insult to injury apart from huge financial loss due to denial of even the notional increment to the Applicants by making them receive less pay and allowances as compared to officers five to six years junior to them.

Supreme Court of India, in a significant judgment on gender equality, had in February 2020 directed that Permanent Commission should be granted to women in army regardless of their service, in all the ten streams where the Union Government have already taken a decision to grant Short Service Commission to women. The Court also held that absolute exclusion of women from command assignments is against Article 14 of the Constitution and unjustified. Therefore, the policy that women will be given only "staff appointments" was held to be unenforceable by the Court.

The Court had held that an absolute prohibition of women SSC officers to obtain anything but staff appointments evidently does not fulfill the purpose of granting PCs as a means of career advancement in the Army. The blanket non- consideration of women for criteria or command appointments absent an individuated justification by the Army cannot be sustained in law.