Plea On Compensation For Wrongful Detention Of Manipur Activist: Petitioner Accuses Manipur Govt. Of Dragging The Matter, Terms It As 'Unfair' 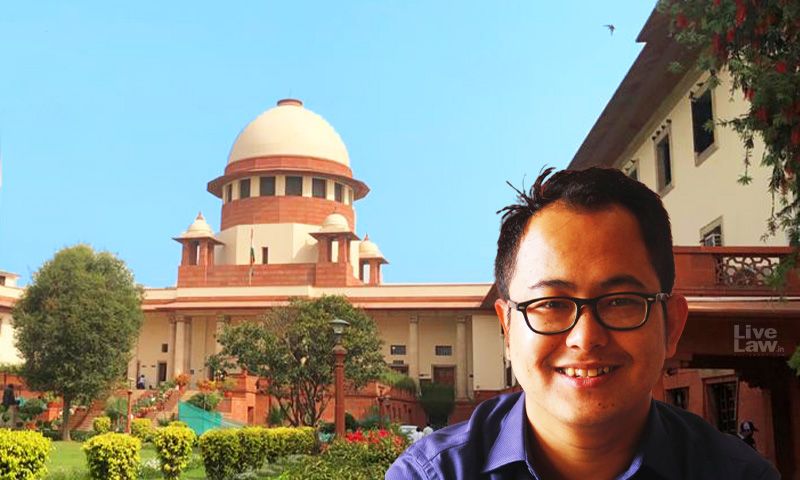 The state of Manipur's suggestion that the plea by father of activist Leichombam Erendro seeking compensation for his son's wrongful detention under the National Security Act (NSA) for a Facebook post criticising use of Cow dung as COVID cure be listed after 3 weeks was met with an objection on behalf of the petitioner.The matter was listed on Friday before the bench headed by Justice D....

The state of Manipur's suggestion that the plea by father of activist Leichombam Erendro seeking compensation for his son's wrongful detention under the National Security Act (NSA) for a Facebook post criticising use of Cow dung as COVID cure be listed after 3 weeks was met with an objection on behalf of the petitioner.

The matter was listed on Friday before the bench headed by Justice D. Y. Chandrachud but as it could not be heard on account of a paucity of time, SG Tushar Mehta, for the state government, prayed, "Your Lordships' may have it after 3 weeks. It is a matter for the public law remedy of compensation. It is a final hearing matter."
At this, Advocate Shadan Farasat, for the petitioner, advanced, "No, My Lords, This is an unfair request. The state of Manipur does not want the matter heard. Your Lordships have been listing it..."
Then, Justice Chandrachud, in a lighter vein, said to the SG, "Mr. Mehta, you owe Mr. Farasat a cup of coffee one of these days."
"That is alright, Your Lordships. But let us not lose our dignity like this", replied the SG.
The bench then posted the matter after 2 weeks.
At the previous hearing, SG Tushar Mehta had advanced, "He chose to come (before the Supreme Court) after two months (of being charged). He was released on my saying. Now, this is the issue of compensation. He is seeking compensation. Please have it next to next week"
Advocate Shadan Farasat, for the petitioner, countered, "The learned Solicitor's statement is inaccurate. I did not choose to come after two months! I was making representations to them! But they did not address my representations!"
However, he did not object to the 2 weeks' adjournment, only praying that the matter be listed after fresh matters.
"I would rather argue the case than fight like this", said the SG.
Reportedly, the Manipur government has opposed the plea by the father of activist Leichombam Erendro. In an affidavit filed before the top court in August, the State government said that Erendro is a habitual offender and that his arrest was needed to prevent him from abusing his position as a political activist.

The Supreme Court had in July issued notice on the prayer made by Manipur based political activist Leichobam Erendro seeking compensation for the illegal detention underwent by him under the stringent National Security Act over a Facebook post that cow dung or cow urine will not cure COVID.

A bench comprising Justices DY Chandrachud and MR Shah granted two weeks time to the respondents to file their reply on the issue of compensation.

On July 19, the Court had ordered his immediate release before 5 PM on the same day itself, after observing that his continued detention would amount to "a violation of the right to life and personal liberty under Article 21 of the Constitution".

The next day, Solicitor General of India Tushar Mehta informed the bench that detention order has been revoked and Erendro was released the day before in compliance with the Court's order. The SG, therefore, requested the bench to put the matter to rest.

However, Advocate Shadan Farasat, appearing for the father of Erendro who has filed by habeas corpus petition seeking his release, pressed the prayer for compensation. Farasat submitted that the detention order had mentioned five cases against him although charge sheet was not filed in any of those cases.

"5 cases were cited against me. In none of the cases, chargesheet has been filed!", Farasat submitted.

"It is a serious matter. Someone has lost their liberty since May!", Justice Chandrachud remarked during the hearing.

The SG said that he had not attempted to defend the detention order yesterday and that the same was immediately revoked.

The Supreme Court had previously, on July 19,  ordered his release before 5 PM  on the execution of bond of Rupees 1000/-.

"We are of the view that the continued detention of the petitioner before this Court would amount to a violation of the right to life and personal liberty under Article 21 of the Constitution. We accordingly direct that the petitioner shall be released forthwith as and by way of an interim direction of this Court, unless he is required to be in custody in any other case, subject to further orders, subject to his filing a personal release bond in the amount of Rs 1000", said the bench and directed his release.

The present petition has been moved by Erendro's father L. Raghumani Singh who's argued that this wasn't a case of invocation of NSA which was only invoked to defeat the bail granted to Erendro and suffers from malice in law.

Erendro was initially arrested on 13.05.2021 for his Facebook post of 13.05.2021 where he had stated that: "The cure for Corona is not cow dung & cow urine. The cure is Science & common sense, Professor ji RIP". The statement was made in the context of the death of the President of the Manipur BJP, Prof. Tikendra Singh, which was meant as a criticism of the BJP politicians who had been advocating cow-urine and cow-dung as cures for COVID-19. Enraged by the Facebook post, few local BJP leaders filed a complaint, leading to his arrest.

On 17.05.2021, the day, he was granted bail by the local court, the District Magistrate, Imphal West District detained him under the stringent National Security Act 1980 (NSA), which is a preventive detention law.

It is Mr Raghumani's case that this was not all a case of invocation of NSA as the innocuous post of his son was incapable of impacting even "law & order", leave alone public order or security of the state, that are the statutory grounds available for detention under the NSA. It is his case that NSA was invoked to defeat the bail granted to Erendro and suffers from malice in law. Mr. Erendro has already spent 45 days in custody for this "innocuous piece of speech".

The petitioner argues that this is a classic case of malice in law, where the law of preventive detention has been used to shut off political voices that the ruling party in the State of Manipur does not like, rather than for any valid purpose. This is not a purpose for which NSA permits preventive detention, making the order malafide and liable to be set aside, according to the petitioner.

Further, as per Mr. Raghumani, not only is the detention bad in law but it is also in direct violation of the Supreme Court's order dated 30.04.2021 in SMW (C)No.3/2021, In Re: Distribution of Essential Supplies and Services During Pandemic, wherein the Apex Court has directed that there shall be no clampdown on information on social media or harassment of individuals delivering help on social media. In this context, the petitioner states that Erendro's Facebook post was intended to dispel misinformation about the COVID-19 cure.

Accordingly, Mr Raghumani has also filed a contempt petition before the Supreme Court for violation of its order dated 30.04.2021 by the District Magistrate, Imphal West District.