'This Is A Pan India Issue. It Would Be A Future Arrangement For All Cases' - SC Suggests Centre To Formulate Policy For Rehabilitation Of Evicted Slum Dwellers In Gujarat And Haryana 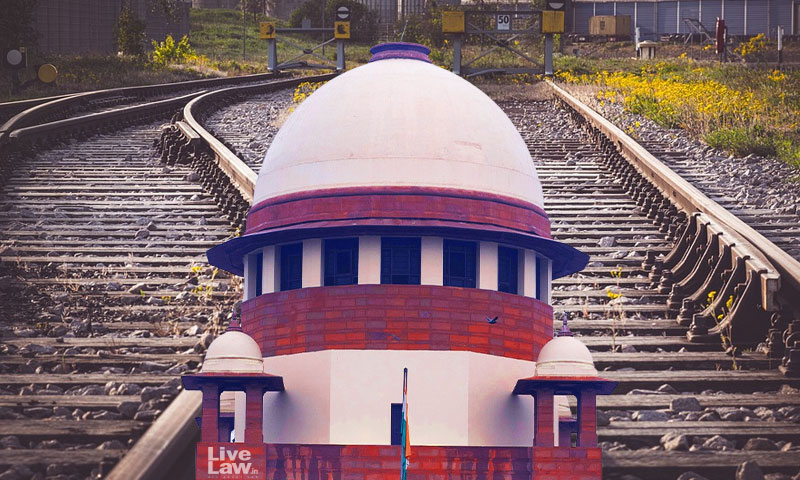 The Supreme Court on Tuesday asked the Centre to take a firm stand on the issue of encroachment in the railway property by the slum dwellers in Gujarat and Haryana and take a decision with respect to their rehabilitation. In this regard, the Apex Court suggested the Centre to evolve a policy, with timelines, that can act as a future arrangement for all cases. While hearing two...

The Supreme Court on Tuesday asked the Centre to take a firm stand on the issue of encroachment in the railway property by the slum dwellers in Gujarat and Haryana and take a decision with respect to their rehabilitation. In this regard, the Apex Court suggested the Centre to evolve a policy, with timelines, that can act as a future arrangement for all cases.

While hearing two Special Leave Petitions challenging the orders of Gujarat and Punjab and Haryana High Courts, that were critical of the slum-dwellers encroaching on Government property, on Monday, a Bench presided by Justice AM Khanwilkar, had asked the Ministry of Railways, State Governments and Municipal Corporations to chalk out a plan for rehabilitation of slum dwellers living adjacent to the Railway tracks in Gujarat and Haryana.

On Tuesday, seeking Mr Mehta's assistance to resolve the issues in the matter, the Bench informed him -

"Solicitor General your presence will be required even in this matter. At one stage you appeared in this matter. See, what we find is this - The corporation, the state as well as the department of Railway are not seeking eye to eye. It is a matter of public interest that the project should go forward immediately…How do you overcome this. We want you to tell us that. Without intending to make any political statement the Government at all three levels is in triple injury, and the Railway cannot have their engine function in that area."

Mr. Mehta assured the Court that he would speak to the concerned officials including the Hon. Railway Minister to find a solution to the present quandary.

"I'll talk to them and I'll speak to the Hon. Railway Minister to intervene."

Concerned that the Railway Department had taken different stands in different forums, the Court urged the Centre to take a firm stand -

"You take a firm stand, that they cannot be there, they are occupying unauthorisedly. So, far as railway land, the law would be different. We understand that argument. Statements have been made in different courts and different forums, which is placed on record. The same department taking different positions."

Ensuring that the highest authorities would be consulted in this regard, Mr. Mehta submitted -

"We will speak to the highest level of each wing and report to your lordship."

Laying down an ultimatum, the Bench emphasised that the project should be rolled out in the next 15 days.

"In 15 days the project should be rolling out. Whatever arrangement is necessary, do it on a war footing level. We don't want excuses."

The Bench further encouraged the Centre to take a firm stand on rehabilitation. In case the Centre felt it was not feasible to rehabilitate then the Court would look into it.

"If the Govt. is firm about its stand that it cannot be given rehabilitation, then take that position. We will take a decision on that, no difficulty. But, different statements are made before different courts, it make problem for us."

Apprising the Court that some time might be needed to get in touch with the Minister since teh Parliament is in session, Mr. Mehta requested -

"Your lorships may have it on next Tuesday. The Parliament is going on, I might have some difficulty in getting them. I am sure the Hon. Rail Minister will sort it out."

The Bench asked Mr. Mehta to explore if policies such as the Faridabad policy for forest land could be extended to the present situation.

"Even if there is something like the Faridabad policy for that forest land, whether that can be extended here also."

Placing reliance on the ratio in Olga Telis v. Bombay Municipal Corporation, the Court urged the Centre to take a position on rehabilitation -

"You need to take a position now. Because the law is clear, Olga Telis cannot be ignored. Olga Telsi does not give them the right to remain there. Rehabilitation is a matter that has to be looked into."

Encouraging the Centre to formulate a policy, the Bench remarked -

"You have a policy. A cutoff date. Go by that and implement it. But, you cannot have this situation that public projects are put on hold for more than 5 years."

Pointing out that the authorities are not taking a stand and the loss is being ultimately borne by the taxpayers, the Bench stated -

"The state looks as Corporation, Corporation looks as State and both of them look at Centre…Find out some solution. There has to be timelines. No mercy. Ultimately, the State exchequer suffers…You can have political compulsion but it is the taxpayers money that goes down the drain…We will have it next Tuesday."

"This is a pan India issue. The policy would be a future arrangement for all cases."

"It is an offence under the Railways Act. In fact the problem lies there. How many officials in your estate department, You close the railway police force dept… if you cannot protect your own property. Those who are accountable are the grassroot level officers…Then Mr. Gonsalves will come and say that I have been there for so long, and you readily agree to that. This is the distribution of largesses at whose cost."