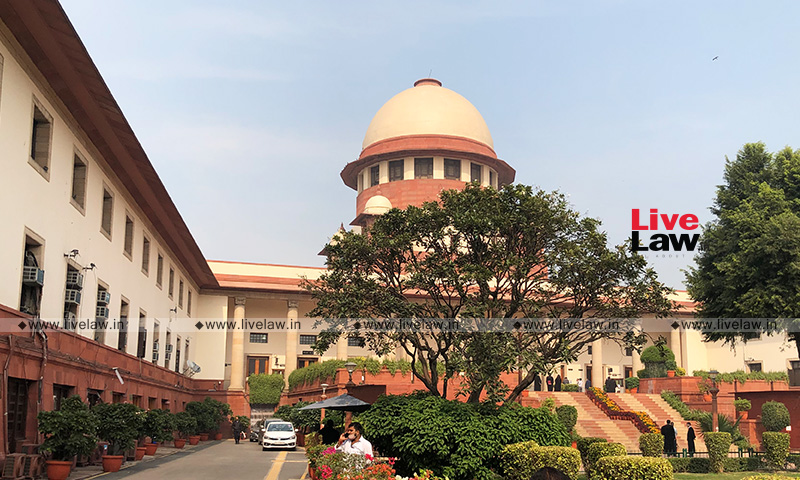 On Tuesday, the Supreme Court suggested establishing a mechanism similar to the Judicial Panel on Multidistrict Litigation set up in the United States of America to, inter alia, resolve matters in which multiple FIR's are registered against a particular person in multiple States. The Apex Court has sought the Centre's response proposing solutions to tackle such multiplicity of...

On Tuesday, the Supreme Court suggested establishing a mechanism similar to the Judicial Panel on Multidistrict Litigation set up in the United States of America to, inter alia, resolve matters in which multiple FIR's are registered against a particular person in multiple States. The Apex Court has sought the Centre's response proposing solutions to tackle such multiplicity of cases.

A bench comprising Justices L. Nageswara Rao and B.R. Gavai heard the submissions made by Senior Advocate, Mr. Kapil Sibal appearing on behalf of Radhey Shyam, Chief Managing Director of Future Maker Life Care Private Limited elucidating that the Code of Criminal Procedure, 1973 ("Cr.P.C.") itself has solutions to the issue at hand.

On the last occasion, the Supreme Court in the writ petition seeking transfer and clubbing of 29 FIRs registered against an accused, who has been in custody for duping people and collecting money from them, to an appropriate Investigating Agency, asked the Centre to come up with some solutions.

At the outset Mr. Sibal informed the Court that he had conferred with Solicitor General of India, Mr. Tushar Mehta, who had conveyed that he would leave the issue of bail to the wisdom of the Court. With respect to the issue of transfer and clubbing of cases he had intimated that he would be open to any reasonable solution.

Mr. Sibal submitted that he had perused the decision of the Supreme Court in State of Punjab v. Rajesh Syal, AIR 2002 SC 3687, as had been indicated on an earlier occasion to act as an impediment to his case. In Syal, the Apex Court had treated each deposit agreement between a victim and accused as separate transactions. The Bench was apprehensive that it being a judgment passed by a 3-Judge Bench, might pose a problem in the present matter and a reference had to be made to a larger bench. Mr. Sibal argued that his case is distinguishable as therein the provisions applicable were Sections 218 and 220 of the Cr.P.C.. Moreover in Syal, the charges had already been framed -

"This has nothing to do with 218 and 220. These are provisions with respect to investigation. We are at the stage of investigation. It is only in one case that charge has been framed."

As Mr. Mehta was not present at the hearing, the Bench suggested Mr. Sibal to argue his bail application. Mr. Sibal's brief submission in this regard was that his client was in jail since the year 2018.

As the Bench was unable to find Mr. Shyam's bail application, Mr. Sibal emphasised that an interlocutory application seeking bail on the ground of the prevalent COVID-19 situation had been filed.

"There is an interlocutory application for interim bail qua COVID-19, milords."

However, the Bench insisted that he file a bail application, for consideration of the Court next week. Assuring the Bench that he'll file a proper application, he sought for an interim bail in the context of COVID.

"File a bail application, we will have it next week. Ask Solicitor to give a note of his suggestion in the main matter. What should we do in a case like this where multiple FIRs are filed, and anything that this court can do."

Apologising for his delay, Mr. Mehta joined the hearing. The Bench asked him to suggest an Amicus Curiae for the matter. Mr. Mehta responded -

Thereafter, the Bench went back to Mr. Sibal's submissions, wherein he enumerated the existing remedy in the provisions of the Cr.P.C.

"Your lordships give me indulgence to point out some provisions from the Code on which the Lordships can cogitate during this period."

Referring to Section 177 Cr.P.C. which states that "every offence shall ordinarily be inquired into and tried by a Court within whose local jurisdiction it was committed", he stressed on 'ordinarily' to suggest that there was no bar in devising other mechanisms for inquiry and trial.

He relied on Section 185 Cr.P.C. to argue that the State Government has the power to direct a class of cases to be tried by a Sessions Court.

"185. Power to order cases to be tried in different sessions divisions.—Notwithstanding anything contained in the preceding provisions of this Chapter, the State Government may direct that any cases or class of cases committed for trial in any district may be tried in any sessions division:

Provided that such direction is not repugnant to any direction previously issued by the High Court or the Supreme Court under the Constitution, or under this Code or any other law for the time being in force."

Justice Gavai reckoned that invoking the said provision at most the cases in a particular State can be consolidated.

Next, the Court's attention was taken to Section 186 Cr.P.C.

"186. High Court to decide, in case of doubt, district where inquiry or trial shall take place.—Where two or more Courts have taken cognizance of the same offence and a question arises as to which of them ought to inquire into or try that offence, the question shall be decided-

(a) if the Courts are subordinate to the same High Court, by that High Court;

(b) if the Courts are not subordinate to the same High Court, by the High Court within the local limits of whose appellate criminal jurisdiction the proceedings were first commenced, and thereupon all other proceedings in respect of that offence shall be discontinued."

Reading the provision, Mr. Sibal suggested that the same offences can be tried by a single court. He highlighted that in the cases against Mr. Shyam, all the offences are exactly the same.

He further pointed out -

"This a scheme where we look at the offence committed and not the offender."

Pertinently, Justice Rao posed a query. He indicated that it might be so that the provisions invoked under the Indian Penal Code were the same, however a case filed by a person in a particular court might not be considered as 'same offence' under Section 186.

Relying on the definition of offence under Section 2(n) Cr.P.C., Mr. Sibal submitted that it refers to "any act".

"(n) "offence" means any act or omission made punishable by any law for the time being in force and includes any act in respect of which a complaint may be made under section 20 of the Cattle- trespass Act, 1871 (1 of 1871);

"Kindly read the definition again, it says 'and includes any act'. It is an inclusive definition…It is a scheme so the offence is the same everywhere."

"In a case of murder and theft, two courts cannot take up the same offence, but if it is cheating where a number of people have been cheated, each complainant has a cause of action to go to a court of particular jurisdiction. This is what we are asking you."

"14. Section 186, Cr.P.C., which deals with the power of the High Court to decide, in case of doubt, the district where inquiry or trial shall take place, is extracted hereinbelow:-

"186. High Court to decide, in case of doubt, district where inquiry or trial shall take place.- Where two or more Courts have taken cognizance of the same offence and a question arises as to which of them ought to inquire into or try that offence, the question shall be decided --

(a) if the Courts are subordinate to the same High Court, by that High Court;

(b) if the Courts are not subordinate to the same High Court, by the High Court within the local limits of whose appellate criminal jurisdiction the proceedings were first commenced, and thereupon all other proceedings in respect of that offence shall be discontinued."

From bare reading of the aforesaid provision it is manifest that the main object and intention of the Legislature in enacting the provision is to prevent the accused persons from being unnecessarily harassed for the same offences alleged to have been committed within the territorial jurisdiction of more than one courts. In order to avoid unnecessary harassment of the accused to appear and face trial in more than one courts, necessary direction is to be issued to discontinue the subsequent proceedings in other courts. The provision is based on the principle of convenience and expediency. However, the sine qua non for the application of this provision is that the cases instituted in different courts are in respect of the same offence arising out of the same occurrence and that the same transaction and that the parties are the same. In other words, the persons implicated as an accused in different cases must be the same. If these conditions are satisfied then subsequent proceeding has to be discontinued."

Mr. Sibal emphasised that the State Government has the power to "collect a class of offences and try them before the Sessions Court". He indicated that in Section 186 Cr.P.C. power to club offences also rested with the Courts.

Considering the urgency in the matter, Mr. Sibal pointed out the three crucial aspects of a criminal proceedings of the present nature.

He beseeched the Court to interpret the Code in such a manner so as to balance the rights of the accused and also give power to the Court and the State Government to resolve the issues.

"We asked the Solicitor for his comments because of this problem continuing for a very long time."

Referring to the Osha ETS. proceedings in the United States of America, Justice Rao apprised Mr. Sibal, that in the said matter multiple cases were filed before different Circuits. The Judicial Panel on Multidistrict Litigation clubbed all the matters filed in separate circuits and sent it to the 6th circuit. The Bench suggested exploring the possibility of a similar mechanism being adopted in India.