Premature Release - UP Govt.'s Policy To Release Prisoners Only On Republic Day Arbitrary:Supreme Asks Govt To Consider All Eligible Persons Regardless Of Application 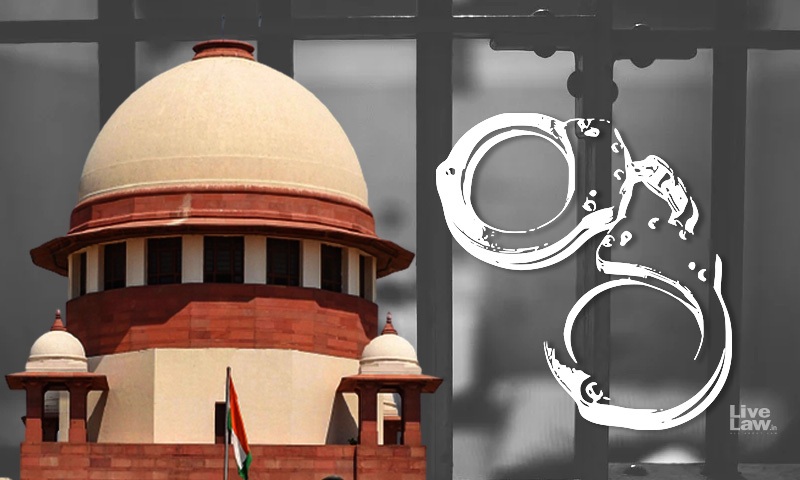 The Supreme Court on May 4 told the state of UP to not deem as ineligible for consideration for premature release those life convicts who have not specifically applied for the relief, and obligated the state government to conduct periodical assessments to identify those who are so entitled.It may be noted that clause 3 (a) of the UP government's policy of August 1, 2018 (framed under Article...

The Supreme Court on May 4 told the state of UP to not deem as ineligible for consideration for premature release those life convicts who have not specifically applied for the relief, and obligated the state government to conduct periodical assessments to identify those who are so entitled.

It may be noted that clause 3 (a) of the UP government's policy of August 1, 2018 (framed under Article 161) stipulates that where no application/prayer/representation requesting premature release is preferred, the convict would be deemed covered under the restricted category and such non-application would be one of the basis under the policy to denude their claim for remission.

"We cannot approve the policy that those who do not specifically apply for remission would fall in the restricted category and would be ineligible for consideration", the bench of Justices Navin Sinha and Krishna Murari has said. The bench was considering a batch of writ applications for premature release of persons sentenced to life imprisonment, after completion of over 14 years of imprisonment. The petitioners have remained incarcerated for actual periods ranging from 16 years to 24 years without remission and 20 years to 31 years with remission. The convictions were primarily under Section 302, 302/149 of the Penal Code.

Noting that the avowed object in the policy dated 01.08.2018 is to prevent overcrowding in prisons of the State, to prevent frustration of emotions and disappointment along with rehabilitation and that it assumes much more significance in the present pandemic times to prevent super spreaders, the bench stated that it cannot "approve of the policy" which regards those who do not specifically apply for premature release as ineligible for consideration as such. "As a welfare State, the obligation to do so would lie on the State by periodic assessments", asserted the bench.

The bench took judicial notice of the fact that at many times a convict may not be aware of the requirement or may not have the were withal to do so. "The present order therefore imposes an obligation on the State and cannot be read as confined in its operation to the present petitioners alone", the bench has directed.

The Court has requested the Executive Chairman of the U.P.State Legal Services Authority, to monitor not only the case of the present petitioners, but of such other prisoners also who may be eligible for consideration but are unable to do so for one reason or the other, keeping in mind the avowed object and purpose of the policy dated 01.08.2018. "The concerned authorities of the State Government are obligated to act in co-operation with the State Legal Services Authority in the larger interest", the bench had directed, clarifying that it may not be understood to have curtailed the procedure or jurisdiction in any manner of the authorities specified in the policy dated 01.08.2018.

The bench has also clarified that in the event of any person being aggrieved, the remedy shall first lie before the High Court under Article 226 of the Constitution.

It may be noted that in April, the Allahabad High Court has also urged the state government to delete from its policy the clause that prohibits the consideration of premature release, if the same is not accompanied by any application / request.

The Supreme Court appreciated that the Allahabad High Court had on 16.04.2018, after noticing the lack of fairness and consistency in considering applications for premature release, observed and urged that that Government ought to lay down a transparent policy in regard to premature release of convicts who were lying in prison for a long time, and it was then that State government framed the policy dated 01.08.2018.

"Curiously, contrary to the direction of the High Court, the State Government, arbitrarily restricted it to premature release of prisoners sentenced to life imprisonment on the event of Republic day each year only. The restricted policy is patently bad for being in derogation of the orders of the High Court", the SC has said.

Additionally, the bench found that it is also discriminatory in nature as there is no nexus to be achieved by providing for premature release only on a specified date, when those eligible to be considered for premature release form a class of persons sentenced to life imprisonment. "There is no criteria laid down on basis of which a convict shall be considered for release on the opportune date in contradistinction to another who may be relegated to consideration in normal course. Differentiation amongst this class of convicts on separate indicia based on specified parameters is an entirely different matter", the bench has expressed.

The bench noted that the policy having statutory force under Article 161 will naturally apply to all persons sentenced to life imprisonment. The bench has further held that "Having been framed subsequent to the U.P. Jail Manual,1956 and the U.P. Prisoners Release on Probation Rules,1938 will take precedence over the latter"

On May 4, the bench directed the state of UP to consider under its policy of August 1, 2018 the case of all the petitioners before the court within 4 weeks, and to dispose off the same with reasoned and speaking orders within this time period.

"Under Article 32 of the Constitution, this court has been passing orders from time to time for premature release of persons convicted either by setting aside the orders refusing grant of premature release on erroneous grounds as well as passing orders for release directly even though the person sentenced had not approached the authorities before institution of the writ petition...On 15.04.2021, we observed that 'there appears to be a virtual deluge of such writ petitions from the State of Uttar Pradesh seeking premature release notwithstanding judicial pronouncements of this court'", stated the bench on May 4.

On April 15, the bench headed by Justice Sinha heard a writ petition (Beche Lal v. State of UP) where it was submitted that the state of UP has failed to appreciate that the petitioner has completed actual sentence of 17 1/4 years without remission for offences under sections 302/149 and 307/49 of the IPC, and has never considered his case as that of other prisoners for remission under section 432 or commutation under section 433(b) of the CrPC, despite his behaviour in jail and no past antecedents. "The government under the Prison Manual suo motu ought to have acted but the government is not following the provisions of the legal norms set by the Supreme Court", it had been advanced. The petitioner prayed for a direction to the state government for his premature relief.

"There appears to be a virtual deluge of such writ petitions from the State of Uttar Pradesh seeking premature release notwithstanding judicial pronouncements of this court", the bench headed by Justice Sinha had noted on April 15 in connection with the petition in Beche Lal. The bench requested the AAG, state of UP to assist the court in the matter. Further, observing that "the State Legal Services Authority and the District Legal Services Authority can play a phenomenal role in identification of persons incarcerated eligible for consideration under the Uttar Pradesh Jail Manual and the Uttar Pradesh Prisoners Release on Probation Rules", the bench had required a copy of this order to be forwarded to the State Legal Services Authority.

Subsequently, the Supreme Court had on April 29 remarked that the state of Uttar Pradesh cannot pass orders at random under the policy formulated by it for premature release of life convicts and that its orders must comply with the parameters of its policy.

The bench of Justices Sinha and Krishna Murari was faced with 3 successive writ petitions alleging non-consideration of the petitioners by the UP state government for premature release, despite the petitioners having undergone more than 16 years in jail without remission.

"The state government cannot pass orders at random. The government has formulated a policy which is very clear on who is eligible and who is not. But the state is not acting under the policy which it has framed", said Justice Sinha.

The judge added that "the state must pass orders in such a manner that people don't have to come to the Supreme Court".

"We have seen the case of the petitioner, it is in the parameters of the policy of 1.8.2018 (Justice Sinha told an advocate in one of the matters). We (previously) ordered release of prisoners on some petitions. But noting that there is a virtual deluge of such petitions from 1 state, we decided to look at the larger canvass, and by our order of April 15, we have called upon the state of UP and its State Legal Services Authority and the matter will be heard on May 4", continued the judge.

Of the three petitions listed on April 29, two (Sarwat Hussain & Ors. v. State of UP; and Sukhdev Singh v. State of UP) were on identical grounds as the plea in Beche Lal.

In the third petition (Jagdish & Ors. v. State of UP), 28 petitioners submitted that they have completed actual sentences ranging from 17 years to 18 years without remission for offences under section 302 IPC etc, and that as per the UP government policy dated August 1, 2018, the convicts who had been sentenced to life imprisonment and who do not fall in any of the exceptions in Clause 3 of the policy are entitled for premature release if they have undergone actual imprisonment of 16 years (without remission) and 20 years (with remission). It was urged that on April 3, representation was sent by the petitioners for premature release but no order has been passed by the respondent-state authorities till date.

On April 29, the bench of Justices Sinha and Krishna Murari tagged these three writ petitions with the plea in Beche Lal, posting them for hearing on May 4.

It may be noted that Clause 2 of the state government's policy of August 1, 2018 allows that the following life convicts, provided they do not fall within the prohibited category as under Clause 3, would be considered for premature release:

The basis for rejection of the claim of a life convict for release are stipulated under Clause 3: where no application requesting premature release is preferred; conviction by court outside the territorial jurisdiction of UP; sentence of imprisonment expressly for the remainder of the natural life of the convict; offence having been investigated by the CBI or any other agency under a Central Act other than the CrPC; conviction for three or more murders; conviction for an offence committed during parole; where the convict has previously absconded; sentence of life imprisonment in more than one criminal matters; sentence of life imprisonment under the NDPS Act, anti-terrorism enactments, POCSO, Official Secrets Act, Customs Act, Foreigners Act, Conversion of Foreign Exchange and Prevention of Smuggling Activities Act; conviction for murder of public servant while on public duty; where convict is a professional or a contract killer; conviction for offences against the State under sections 121-130 of the IPC; conviction for specified offences under the IPC including, inter alia, section 376 (rape), section 373 (buying minor for purposes of prostitution etc), section 364A (kidnapping or maiming minor for purposes of begging).