"You Are Only Telling Us Difficulties And Not Impossibilities": Supreme Court Tells Centre, Reserves Order In Plea Seeking Protection Of Great Indian Bustard 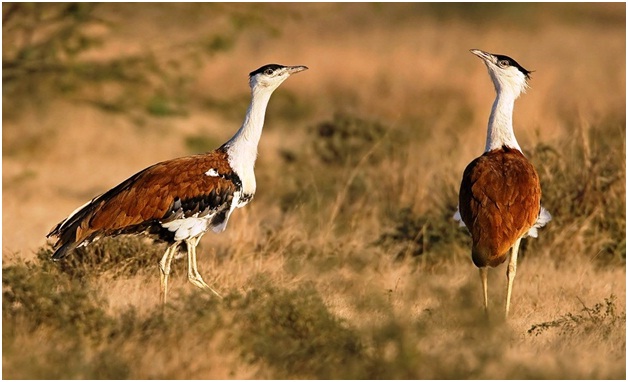 Supreme Court has on Tuesday reserved its order in plea filed seeking protection for Great Indian Bustard from transmission lines in States of Rajasthan and Gujarat.A three-judge Bench of CJI Bobde, Justice Bopanna and Justice Ramasubramanian concluded hearing the arguments of all parties regarding under grounding of low and high voltage transmission lines to protect Great Indian Bustards...

Supreme Court has on Tuesday reserved its order in plea filed seeking protection for Great Indian Bustard from transmission lines in States of Rajasthan and Gujarat.

A three-judge Bench of CJI Bobde, Justice Bopanna and Justice Ramasubramanian concluded hearing the arguments of all parties regarding under grounding of low and high voltage transmission lines to protect Great Indian Bustards which is an endangered species.

The Court had previously observed that it can consider directing under-grounding of the low voltage transmission lines in states of Rajasthan and Gujarat, and installation of Bird diverters in case of High transmission lines, for protection of the Great Indian Bustard.

During the hearing, Senior Advocate Shyam Divan appearing for the petitioner submitted before the Court that they are seeking that all future over head power lines and selected current over head power lines be made underground in priority areas which are the Bustard's habitat areas. In potential habitats, diverters are being sought.

Divan responded to the Ministry's argument thag High voltage lines are not feasible, and do not cause deaths due to electrocution, stating that there is a consensus that these high voltage lines are biggest reasons for the deaths. Under grounding of lines is the only way to mitigate bustard deaths, and diverters cannot do that in priority areas.

"Cost of mitigation cannot justify extinction of a species" Divan said. Divan further said that the Power lines are biggest threat to the Bustards and both high and low voltage lines cause their deaths.

Divan drew the Court's attention to excerpts from the Wildlife Institute's Report which stated that such mortality rate is unsustainable for any species and is sure cause of extinction. These birds are heavy birds and the transmission lines cause their deaths. The Union Ministry of Power has also acknowledged that these Power lines do pose threat to these bustards.

Sr Adv Divan stated that all power lines cause bustard deaths and making distinction between high and low voltage is ferocious and detrimental to their protection.

Divan also informed that Court that as far as the feasibility of high voltage lines are concerned, putting high voltage lines underground is possible, and it has happened in India and has become a norm is several jurisdictions across the world.

He added that the under-grounding will insure there's no transmission lost, accident risk like children being caught in transmission lines is reduced, and will also reduce high bird mortality.

Divan then drew the Court's attention to several tenders which have been granted in the pas in various areas for under-grounding of high voltage transmission lines. He pointed out that the Annual report of Power Grid Corporation informing its stakeholders of initiatives it has taken, also stated that they are providing under-grounding under smart city gurgaon project. He added that in 2019 Transmission lines were directed to be underground in Saurashtra. Even for flamingos, under-grounding has been done before.

Divan reiterated that diverters will not be sufficient in priority areas and clarified that Petitioners are not seeking under-grounding of all areas, and their prayer is restricted to lines in priority Bustard areas. Divan submits that the Wildlife institute and petitioners have gone in the field and have specifically identified power lines as well.

The Bench then stated that it has has understood what is being sought in terms of under grounding of power lines and the areas where it is being sought. The Court however asked Mr Divan for information regarding who will deal with expenditure.

Divan submitted that these types of costs are pass through costs, under electricity act. Electricity transmission costs are pass through costs. He added that there is a certain cost to be borne by public or private sector infrastructure, and there also are CSR obligations. Divan: It's been held in previous judgements of this court that the Principle of eco centrism be followed and wildlife has to be protected.

Divan then stated that it is an important part of present generation's natural heritage and should be protected. He cited previous judgement in case where the question was if Asiatic lions found in Gujarat should also have a home in MP, and the Court had said that at some times you have to look at the species interest. "From perspective of the Great Indian Bustard, these power lines need to go!" Divan said

Divan further clarified that they are not seeking over board application of this principle, and are seeking it for a limited purpose of the species interest which is so less in number that it will be extinct if these lines aren't removed. "Other than cost which can be borne by some commercial venture, there is nothing against human beings at all." the Bench said "Yes infact it has benefits" Divan responded.

Divan also stated that while bow they are seeking under-grounding of high voltage lines only in priority areas, at least going forward both potential and priority areas should be protected. "This term potential GIB habitat is a very big word. We don't know where the bird will fly off or migrate to. How do we take word potential and put it an order." CJI said.

"They have divided the habitat into potential and priority areas." Divan responded. "If we give direction for no over head lines, this problem will anyway be solved, they can fly off wherever they want to." the Bench said. "My learned brother has an important thought that if timeline for undergrounding high voltage lines is long, for time being we could direct diverters to he installed."

ASG Aishwarya Bhati appearing on behalf of the Ministry of Power submitted that they are not taking this as an adversarial litigation at all. She then drew the Court's attention to Ministry's affidavit dated 15th March 2021. The Bench then asked ASG Bhati is if the Court in its order can give directions in terms of lines mentioned by Mr Divan or in terms of the lines in the map.

The Bench further suggested that it can pass the order in terms of Power lines located in the areas in the map and referred to by Mr Divan. It clarified that they do not wish to pass orders for specific lines, because lines may shift or change, and in that case it should still be underground.

ASG Bhati then submitted that their concern is that Mr Divan has also included High transmission lines, and under grounding them may be impossible. "Why? He has shown that tenders have been given in the past." CJI asked

Bhati clarified that it is not just the financial difficulties, there are technical difficulties involved as well, including difficulties that may happen in rural areas as compared to urban areas. The Bench then observed that there are a lot of farm lands and open areas where there is no construction, and therefore it would be easy to make it underground as compared to cities which are crowded.

"There are such modern methods available for insulation. And tenders for undergrounding of high voltage lines have been issued, how can you say it can't be done or there are technical problems?" CJI observed.

In response to the Court's observation regarding tenders having been issued in the past, ASG Bhati stated that all those tenders were in urban areas. "The Nagpur Jabalpur road is not an urban area." CJI said.

"The only reason why we hearing you is that we don't want to pass an order which can't be implemented, or something which is technically impossible. Not if something is difficult, because something difficult can still be done. " Bench observes "You are only telling us difficulties, tell us the impossibilities."CJI remarked.

Bhati further stated that they are not against the species interest, and requested the Court to consider Feasibility of saving species only by under grounding when there are adequate steps that can be taken through other measures.

Senior Adv Manish Singhvi appearing for the state of Rajasthan submitted that are saying that diverters are better option for high voltage lines. For low voltage lines, under-grounding is feasible.

Sr Adv AM Singhvi appearing for the National Solar Federation of India submitted that the organisation is biggest contributors to reduce pollution in country. He stated that Solar energy persons, of which they are the biggest association will be affected by this the most.

In response to the Bench's query regarding how is the Federation's a legal rights affected, Dr Singhvi submitted that their rights are affected because if the court directs udner grounding of lines through which solar power is transmitted the cost comes on them, unless Court reserves their rights.

Singhvi added that Wildlife Institute also concluded that it will not be feasible to lay underground lines which have already been laid down, and there are also technological challenges the Court needs to take into account.

"Balancing is all we want. All of us in the larger sense do not want the Bustard to vanish. No right thinking indian would want them to diminish, much less vanish." Singhi said that what they are seeking is that what ever order the Court passes, their inter-se contractual rights are not compromised.

"We will not say that. You have right to negotiate the contract. We will say this is not intended to effect any contractual relationship. But even this doesn't mean that we are saying that existing contracts will continue exactly like this." Bench clarified

Singhvi stated that he understands what Court is saying, that a mandamus will not be issued, and their rights may not be compromised. "If we find right words we will say it." the Bench said

Supreme Court had in February 2020 noted that it appears that one of the hazards in relation to the Great Indian Bustard bird is the existence of power lines which are said to obstruct the flight path and said to kill the said bird upon collusion. It is well known that the Great Indian Bustard bird is a large bird and finds it difficult to maneuver easily in flight. One of the solutions might be, if the flight path of these birds in the area is determined and overheads lines are taken down and laid underground

The Court had directed inclusion of 3 more persons in the Expert Committee already formed by the Court. The court had in 2019 taken note of alarming extinction both the birds and had also constituted a high powered committee to urgently frame an emergency response plan and implement it for the protection of these species.

The Directions was issued in a plea filed by retired IAS Officer Ranjitsinh and other actual seeking protection of Great Indian Bustard and Lesser Florican whose population had been sharply declining.