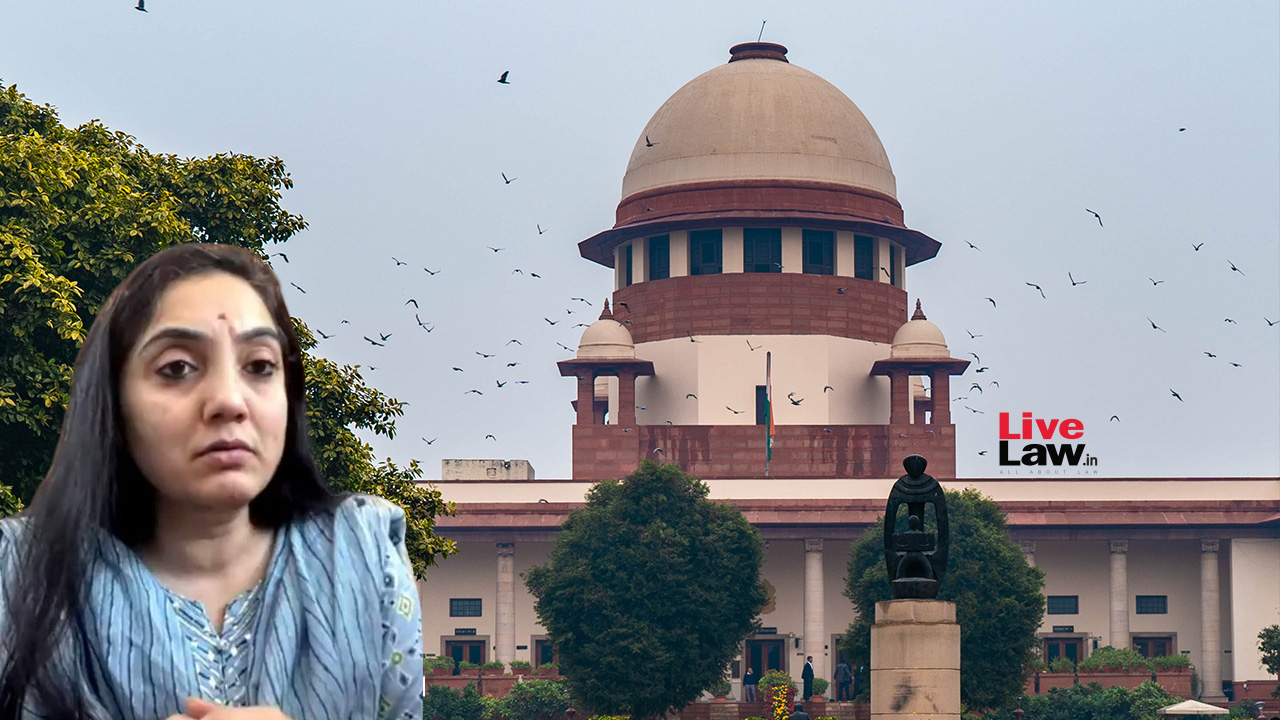 In an interim relief to former BJP Spokesperson Nupur Sharma, the Supreme Court on Tuesday directed that no coercive steps be taken against her in the multiple FIRs registered in several states over her remarks on Prophet Mohammed during a television channel debate on May 26.The Court said that the same relief will cover any future FIR or complaint which may be registered or entertained...

In an interim relief to former BJP Spokesperson Nupur Sharma, the Supreme Court on Tuesday directed that no coercive steps be taken against her in the multiple FIRs registered in several states over her remarks on Prophet Mohammed during a television channel debate on May 26.

The Court said that the same relief will cover any future FIR or complaint which may be registered or entertained against her with respect to the same telecast.

A bench comprising Justices Surya Kant and JB Pardiwala, which had earlier refused to entertain Sharma's petition on July 1, today issued notice on a fresh Miscellaneous Application filed by her seeking to revive her earlier plea. Sharma's lawyer Senior Advocate Maninder Singh submitted that after Supreme Court's order of July 1, genuine and serious life threats have surfaced against her, and due to threats to life and liberty, she is not in a position to avail the alternate remedy of approaching the High Court as earlier directed by the Supreme Court.

Considering this submission, the bench said that its main concern is to ensure protection for Sharma so that she can avail her remedies under law. The bench issued notice to the Union and States (where FIRs have been registered) to explore the modality of giving her security from life threats.

"In order to explore this, let notice be issued to the respondents returnable by 10th August. Copies of the main writ petition be also forwarded along with the notice. Liberty granted for dasti and service through standing counsels. Meanwhile, as an interim measure, it is directed that no coercive action shall be taken against the petitioner pursuant to the impugned FIRs or such FIRs/complaints which may be registered/entertained in the future pertaining to the same telecast dated 26.05.2022," the bench said in its order.

The relief was granted in Sharma's application to revive her withdrawn writ petition which was filed to club the multiple FIRs registered in different states over her remarks on Prophet Mohammed. She had also sought a stay of arrest in the cases as interim relief. In the Miscellaneous Application filed to re-open the writ petition, Sharma has said that she is receiving rape and death threats after the Court's critical comments against her on July 1.

Nupur Sharma had withdrawn her petition on July 1 following the critical remarks by a vacation bench comprising Justices Surya Kant and JB Pardiwala against her public comments, which the bench said "set the whole country on fire". Sharma's writ petition had sought the clubbing of the FIRs registered in the States of Maharashtra, Telangana, West Bengal, Karnataka, Uttar Pradesh, Assam and the Union Territory of Jammu & Kashmir with the FIR registered by the Delhi Police.

What Transpired in The Supreme Court Today?

Ever Increasing Threats To Sharma's Life After She Had Withdrawn Her Petition; Genuine & Real Threat To Her Life; Practically Impossible For Sharma To Avail Other Remedies: Senior Advocate Maninder Singh

Appearing for Sharma, Senior Advocate Maninder Singh submitted that pursuant to Sharma withdrawing her petition on July 1, there was ever-increasing serious threats to her life.

"The threat is continuing. And there is a genuine serious risk of life in me going to every place to quash the FIR. It is one allegation of so-called criminal offence and multiple FIRs. I beseech your lordships. The threat is genuine and real now. My rights under Article 21 are at stake. Your lordships are the protectors of Article 21."

Justice Kant at this juncture said that the bench did not intend that she should go to all High Courts to seek remedy.

"To that extent we are correcting, we did not intend that you have to go to all places," the judge said. He also asked if Sharma was willing to go to one place of her choice.

"Will you be willing to go to Delhi HC?" Justice Kant asked. Singh answered in the affirmative.

On July 1, a vacation bench comprising Justices Surya Kant and JB Pardiwala refused to entertain Sharma's petition. During the hearing, the bench made strong oral comments against Sharma, saying that she was "singlehandedly responsible for what is happening in the country". The bench said that being a spokesperson of a political party is not a license to make irresponsible comments. The bench had also said that the petition "smacks of arrogance that the Magistrates of the country are too small for her", and added that she should avail alternate remedies than approaching the Supreme Court. Following the critical remarks of the bench, Sharma's lawyer chose to withdraw the petition.