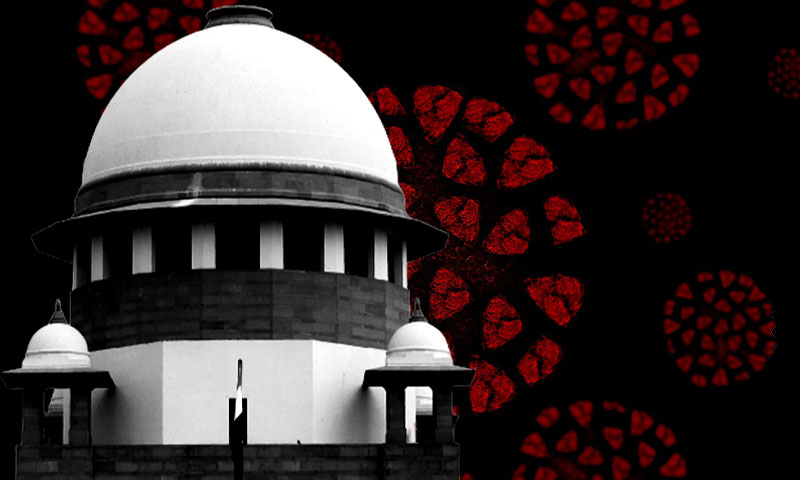 Supreme Court has on Tuesday issued notice in PIL filed seeking directions to operationalise all the provisions of the Clinical Establishments Act, 2010, and Clinical Establishment Rules, 2012, and among others, in order to ensure the affordable and quality healthcare guaranteed under the constitution.A Bench headed by CJI NV Ramana has sought the Government's response to the plea filed by ...

Supreme Court has on Tuesday issued notice in PIL filed seeking directions to operationalise all the provisions of the Clinical Establishments Act, 2010, and Clinical Establishment Rules, 2012, and among others, in order to ensure the affordable and quality healthcare guaranteed under the constitution.

A Bench headed by CJI NV Ramana has sought the Government's response to the plea filed by Jan SwasthyaAbhiyanand Patients' Rights Campaign.

During the hearing, Senior Advocate Sanjay Parikh appearing for the petitioner submitted that " the Clinical establishment act came after several committee's recommendations and National Policy on Health and this also provided for rate determination and standard treatment guidelines. Even though the Act provided all this to be done a National council and State council was constituted."

"If i am right State government already has mechanism to regulate these establishments?" CJI asked

Mr Parikh responded saying that the structure has come, ultimately it has to be done by central government in consultation with the State governments. There were briefings of national council trying to find out the services that were to be provided. The conditions of Registrations have not beem fulfilled

"The preamble says it's applicable to the entire country" CJI said.

"11 States & 6 UTs have adopted the Act. Andhra Pradesh and Telangana have passed a resolution, they've to notify it. Other states have certain legislations but there is a provision in the act that they can adopt it too. Problem is because of minimum standards not being notified, even though the structure exists, but Act has not been implemented." Mr Parikh said.

"Rules, they have made rules?" CJI asked

"No they haven't. Everything is there, except the implementation." Parikh said

Mr Parikh said that even during covid, If this was in existence, they (National Council andState Council) have provided minimum standard guidelines, and the charges to be charged.

"They've passed some legislation and made rules, Question is, a little practical, if you see these Rules, do you expect that a small clinical centre or laboratory can have persons like these, with these qualifications having MD, Msc Doctorate, etc ? It's difficult to have a small laboratory with all these people as its burdensome to them." the Bench said.

Mr Parikh further submitted that there was a patients charter that they have certain rights. NHRC along with Ministry of Health formed this Patients Character but hasn't been implemented either.

"We will issue notice." the Bench said

"Let us hope, let us hope the Government will respond." CJI said.

Details of the Petition: The present plea has sought directions for notification and implementation of that the conditions for registration which include the observance of minimum standards, display and observance of determined rates for procedures and services, compliance with the standard treatment protocol, as provided in Section 11 and 12 of the Clinical Establishments Act 2010 read with Rule 9 of the Clinical Establishment Rules, 2012.

The plea has been filed by Advocate Srishti Agnihotri, and drawn by Advocates Sanjna Srikumar and Anmol Gupta.

The plea has further sought directions to have a uniform standard of healthcare in consonance with the Article 21 and Article 47 of the Constitution either by adopting the provisions of the Clinical Establishments Act, 2010 or bringing their laws in conformity with the said Act and Rules.

Further, directions have been sought to declare that the Charter of Patients' Rights notified by the NHRC, be implemented by all the States and UTs under Article 141, 142, 144 of the Constitution, till the gaps existing in the CEA 2010 are filled up by a suitable legislation.

According to the petitioner, directions need to be issued to create a grievance redressal mechanism for the patients at the district, state and national level till the lacunae in the CEA 2010 are filled by a suitable legislation,