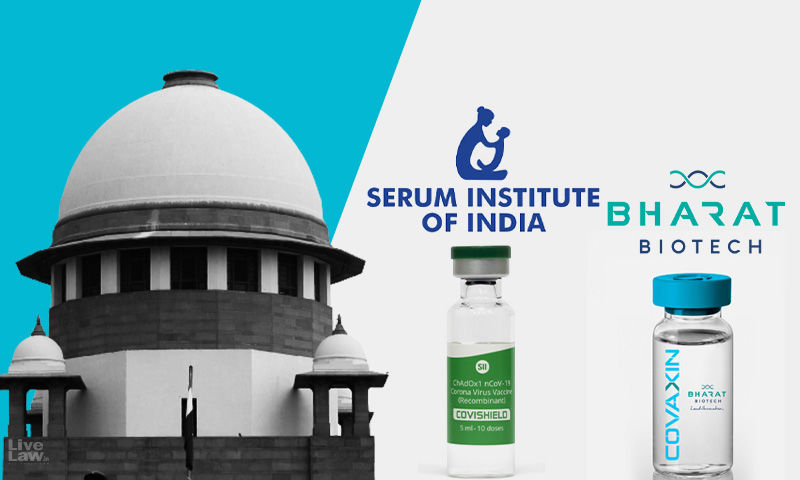 The Supreme Court on Friday raised serious questions at the Centre's COVID vaccination policy which allows differential pricing between Centre and States and allows private companies to set the prices.The Court also asked why the Centre was not considering powers of compulosry licensing under the Patents Act over COVID vaccines."Do not leave the vaccine pricing and distribution to...

The Supreme Court on Friday raised serious questions at the Centre's COVID vaccination policy which allows differential pricing between Centre and States and allows private companies to set the prices.

The Court also asked why the Centre was not considering powers of compulosry licensing under the Patents Act over COVID vaccines.

"Do not leave the vaccine pricing and distribution to the manufactures, This is equity over public goods. You need to pick up the responsibility for this", said the Court.

"Whether the procurement is for the central government or the states, it is ultimately meant for the citizens. Why must we not adopt the model of the National Immunisation Programme? Why can't the Centre acquire hundred percent, identify the manufacturers and negotiate with them and then distribute to the states? We are talking about the centralisation of the procurement and the decentralisation of the distribution. You have given 50% quota to the states".

"This means leaving it to the vaccine manufacturers to decide which state gets how much? Can this question of equity be left to the private sector?", asked Justice DY Chandrachud.

"4500 crores were funded to the organisation for the development of the vaccine. Then we also own the product!", added Justice Ravindra Bhat.

"The same manufacturer is saying Rs 150 to you and 300-400 to the states! At a bulk level, the price difference will be of 30,000 to 40,000 crores. Why must the nation pay this? This can be used elsewhere! Why can't the central government get in bulk and then the states have it picked up?", continued the judge.

"It is $2.15 in the US and it is low even in the EU. Why must it be 600 to the states and 1200 to the private hospitals in India? Our drug consumption parallels no one! We are the largest consumer!", said Justice Bhat.

"India was at the forefront when we negotiated flexibility in the TRIPS. That is when we got Article 30 in the TRIPS (exceptions to the exclusive rights conferred by a patent, taking account of the legitimate interests of third parties).

We were the first country to issue compulsory licence in the NATCO case, where a life saving drug was involved (The country's first compulsory licence has been granted by the Indian Patent Office to Hyderabad-based drug-maker Natco, which allows it to make and sell in India, a similar version of Nexavar, an advanced kidney cancer drug, over which a German pharmaceutical company holds patent) In view of the prevailing national emergency, a case is made out under section 92(3) of the Patents Act (for compulsory licensing). Of course, we do not mean it as a direction, only as an ongoing dialogue", said Justice Bhat.

"States like Germany, Canada and France have all issued compulsory licences in respect of essential drugs. The government can even takeover (the invention) under section 100 of the Patent Act or there can be licensing through the patent controller", continued the judge.

"You speak of cooperative federalism in drug price bargaining. You may say that patented drugs are excluded from the Drug Price Control Order. But this is a national emergency and in view of the same, Rules 3 and 19 of the Order require you to mandate the price", Justice Bhat told SG Tushar Mehta.

"The pricing issue is extraordinarily serious. Today you are saying 50% free of charge to the Centre for people above the age of 45 and the frontline workers. The rest 50%, the state have to negotiate from the private sector for the age group of 18 to 45. We have 59 crore Indians today in that age group. Also, a large segment is under resourced, poor, marginalised, SC,ST. Where will they find the money? We can't follow this private sector model in the times of crisis. Yes we have to incentivise them but we must follow the National Immunisation Programme. How will the private sector know how much to give to Maharashtra or Uttarakhand or Manipur or Gujarat. You can't leave this to the manufacturers. This is equity over public goods. You need to pick up the responsibility for this", Justice Chandrachud told the SG.

"Also, as we open up the vaccination programme to the age group of 18 to 44, knowing the capacity of Bharat Biotech and Serum Institute of India, we need to ramp up the availability of the vaccine. It cannot continue to be from just these two units. You have to use your power so that there are additional units", said the judge.

The bench inquired if the finance ministry has made any previous grants to Bharat Biotech and SII in the past like the current infusion of 1500 and 3000 crores. The bench asked if the current vaccine prices account for infusion of funds for production infrastructure and other aid provided by the central government and if the central government can indicate the extent of direct and indirect grant/aid that was provided for research development and manufacture of vaccine.

"Why is the central government not buying hundred percent of the doses produced considering the gravity of the pandemic? Will SII and Bharat Biotech come to demonstrate equity in disbursing vaccines between states?", asked the bench.

The bench was of the view that the Centre should clarify its own investment and facilitation for ramping up production by all private manufacturers and clarify if this investment would be reflected in the eventual price that is provided for states and private procurement which can be realistically bargained and set only by the Centre.

The bench questioned the argument of fostering competitive markets by the Centre distancing itself from production and if it truly results in affordability of the vaccine- "Particularly, when the goods are scarce and the Centre has approved very few companies in production. Presently, there is a duopoly. This would be the most important intervention especially when these private manufacturers have been funded and facilitated by the Centre which makes them a public good", it has been pointed out to the SG.

The bench comprising Justices DY Chandrachud, L Nageswara Rao and S Ravindra Bhat was hearing the suo moto case In Re Distribution of Essential Supplies and Services During Pandemic.

The bench released the copy of the order on May 2.