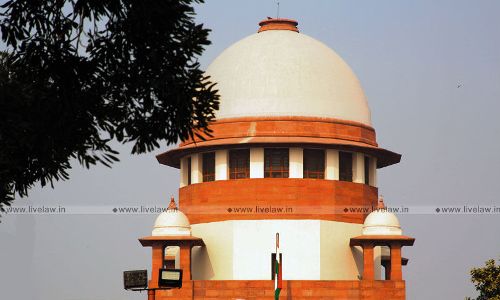 Noting that "this is the first time that the contemnor (Suraz India Trust Chairman Rajiv Daiya) has moved an application for unconditional apology", the Supreme Court on Thursday deferred consideration of this application for the time being and thus, deferred the imposition of sentence for the time being.On September 28, the court had held Daiya guilty of contempt of court for scandalising...

On September 28, the court had held Daiya guilty of contempt of court for scandalising the Court and wasting its judicial time by filing repeated petitions with contemptuous allegations against judges and court staff.
On Thursday, the bench of Justices S. K. Kaul and M. M. Sundresh told Daiya, "This is the first time you have tendered an unconditional apology. It is not a pleasure for us to convict someone. We will defer the sentence hearing till January. Let us see how you behave".
Listing the matter in January, the bench, however, clarified that so far as the disciplinary proceedings against Daiya initiated by the state government are concerned, they can proceed as per their own norms and are not sub-judice before the bench.
Noting that Daiya has not deposited the cost of Rupees 25 lakhs, which was earlier imposed on him for filing frivolous PILs, the Court had on September 28 directed the recovery of the said amount from his assets in the manner of recovery of land revenue arrears.

Earlier, the bench of Justices Kaul and Sundresh observed that the contemnor was behaving as if "I will throw mud at all, whether it is the court, administrative staff or state government. So apprehensive of this mud, they may back off".

"We refuse to back off", the bench sternly said.

"His actions to scandalize the court cannot be countenanced. He continues with his contemptuous behaviour", the bench noted. Therefore, the bench said that it has to take the matter to its "logical conclusion".

The Court said that the apology submitted by Dahiya was not sincere and was only an endeavour to get out of the consequences.

"Apologies submitted by him are only endeavours to get out of consequences, again followed by another set of allegations, thus a charade. There's been no remorse on part of contemnor", the bench observed.

The bench had said that since a composite notice was issued to him on conviction and sentence, there was no need to hear him separately on sentence. However, the bench said that it was giving him one more chance, and posted the matter for hearing on sentence on October 7.

While reserving its judgement on 8th September, the Bench had granted three days time to Rajiv Daiya to tender an unconditional apology for scandalising the Court and withdraw 'all what he has said'.

The request to tender an apology was made by Daiya when he appeared before the Court pursuant to Court's order issuing bailable warrants against him.

Through its 2017 judgement, the Supreme Court had imposed an exemplary cost of Rs.25 lakh on the NGO, Suraz India Trust, and restrained the trust and its chairman, Rajiv Daiya, from filing any case, including PIL, in any court. The said order was passed observing that the Trust had filed frivolous petitions, and wasted judicial time.

The Bench had also considered the issue of contempt action against Daiya for non-compliance of an Order which directed him to submit Rs. 25 lakhs cost over allegations levelled against Judges. The Court had in April this year issued a notice of contempt to Daiya.

While reserving its judgement, the Bench had observed that if an unconditional apology was given by Mr Daiya in the next three days, the same would be taken into consideration by the Court before passing the orders.

On May 1, 2017, the Supreme Court's three-judge bench headed by the then Chief Justice of India, J.S.Khehar had imposed an exemplary cost of Rs.25 lakh on the NGO, Suraz India Trust, for filing frivolous petitions(64 cases across various courts), and wasting judicial time, and restrained the trust and its chairman, Rajiv Daiya, from filing any case, including PIL, in any court.

In February 2021, a Bench of Justices SK Kaul and Hrishikesh Roy had issued bailable warrants against Daiya for not depositing the cost of Rs. 25 lakh imposed on the NGO for filing 64 PILs before various High Courts and the Supreme Court without any success, and 'repeatedly misusing' the jurisdiction.

In 2020, notice was issued to the NGO for not having deposited the cost imposed in view of the observations made in its order dated May 1, 2017. The Apex Court also required the disclosure of all movable and immovable assets of the original petitioner so that the costs can be recovered.

Directing Daiya to deposit the amount with a month's time, the Bench took seriously the manner in which Daiya had even ventured to the residence of Supreme Court judges, including that of the CJI, levelling various allegations against the Supreme Court Registry staff.

"To stop this practice, we direct Suraz India Trust will not file any case. Rajiv Dahiya was restrained from filing any public cause directly or indirectly...," the Bench, also comprising Justice DY Chandrachud and Justice SK Kaul, passed the order after hearing the matter for more than three hours.

The Bench took note of all the 64 cases filed by Suraz IndiaTrust in which Daiya had levelled accusations against Judges in the name of public cause, without success.