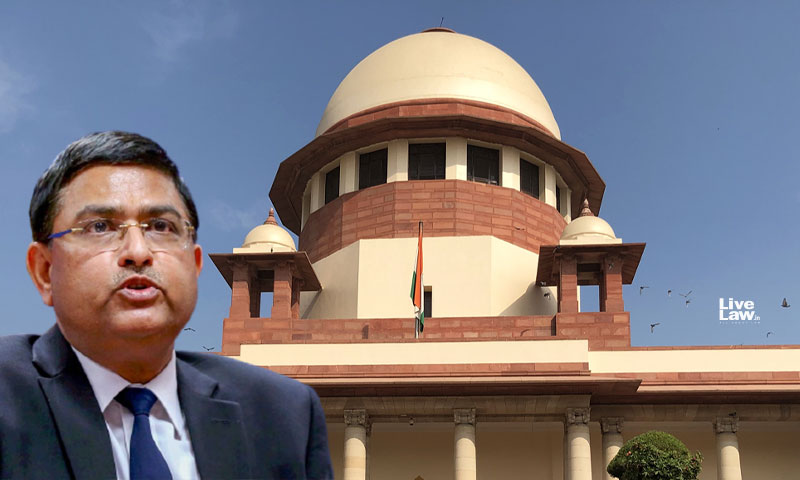 The Supreme Court on Thursday asked the Centre for Public Interest Litigation to file an SLP against the Delhi High Court judgment dismissing the challenge to the appointment of IPS Officer Rakesh Asthana as the Commissioner of Delhi Police.The Apex Court said it will consider the matter next Friday.This order was passed by the bench of Justices D. Y. Chandrachud and A. S. Bopanna...

The Supreme Court on Thursday asked the Centre for Public Interest Litigation to file an SLP against the Delhi High Court judgment dismissing the challenge to the appointment of IPS Officer Rakesh Asthana as the Commissioner of Delhi Police.

The Apex Court said it will consider the matter next Friday.
This order was passed by the bench of Justices D. Y. Chandrachud and A. S. Bopanna while considering a writ petition filed by CPIL under Article 32 challenging the appointment of Asthana.
On August 25, the Supreme Court had requested the Delhi High Court to decide within two weeks another petition already pending before it, by one Sadre Alam, challenging the appointment of Rakesh Asthana IPS as the Delhi Police Commissioner. The bench of CJI N. V. Ramana, Justices D. Y. Chandrachud and Surya Kant had given liberty to the CPIL to intervene in the petition before the High Court. "We request the Delhi High Court to consider the matter as early as possible in 2 weeks for us to have the benefit of High Court's judgement. Petitioner is at liberty to file intervention application", the bench stated in its order. The petition filed by CPIL was kept pending at the Supreme Court and is adjourned for two weeks.
On October 12, the Delhi High Court division bench of Chief Justice D. N. Patel and Justice Jyoti Singh dismissed the petition by Sadre Alam. The NGO 'Centre for Public Interest Litigation' had intervened in the petition through Advocate Prashant Bhushan challenging Asthana's appointment.
On Thursday, Mr. Bhushan advanced, "This petition has been pending before Your Lordships prior to the High Court petition. The issues which we have raised in the petition are the same as the issues which the petitioner in the High Court has raised. Because he had copy-pasted our petition. So virtually, they have all been dealt with by the High Court"
SG Tushar Mehta countered, "Then I will file an affidavit protesting the petition. He was heard at length before the High Court, the submissions were recorded, he had argued at length. An SLP must be filed, the writ petition may not survive...when there is a judgment intra-party, Your Lordships have said that a 32 petition may not be entertained which has the effect of setting aside a judicial pronouncement by the High Court. That would be a mischief"
Senior Advocate Mukul Rohatgi, for Asthana, also advanced that the instant writ petition has now become infructuous and that the same may be disposed off and the SLP may only be considered now.
At this, Justice Chandrachud observed, "In a service matter, when somebody is not a party before the High Court and they ask for permission to file an SLP, then, depending upon the matter, there is precedent of the Court where we allow them... We had directed the High Court to dispose off the PIL. So we were just wondering whether to obviate any technicality, because now there is a judgment of the High Court, should you also not file an SLP now? Although we are not disposing off your writ petition under 32 right now."
"I don't want that to delay the matter. I Will file the SLP in the next three days, by Monday. My only anxiety is that the matter should not be delayed", replied Mr. Bhushan.
"We will record your statement that you will also be filing an SLP and then we will deal with both", said Justice Chandrachud.
Dictating the Order, the bench recorded, "The Solicitor General has raised a preliminary point in regard to the maintainability of the petition under article 32 of the Constitution, having Regard to the fact that by order of this Court of August 25, the High Court of Delhi was requested to consider hearing the writ petition expeditiously within a stipulated time frame. The petitioner was permitted to intervene in those proceedings. The judgment of the Delhi High Court was rendered on October 12. In this view of the matter, it has been submitted on behalf of the respondents that since the petitioner had also intervened in the proceedings before the Delhi High Court, it would be necessary for the petitioner to challenge the judgment independently under Article 136 of the Constitution. Mr Prashant Bhushan states that he is in the process of filing a special leave petition against the judgment of the Delhi High Court, in all probability by Monday. In the circumstances, we think it appropriate to direct that the special leave petition be listed on next Friday. A copy of the petition to be served on the advocate instructing the solicitor general."
In its judgment, the Delhi High Court held that directions issued by the Supreme Court in the decisions rendered in Prakash Singh's Case (I) and Prakash Singh's Case (II) are applicable only for appointment to the post of "DGP of a State", and not the Union Territories.

"The judgement and the directions therein, have no application for appointment of Commissioners/Police Heads of Union Territories falling under the AGMUT Cadre," the Bench ruled.

The Court also held that the Executive, which is responsible for the law and order situation in the National Capital, must have a reasonable discretion to select an officer it finds more suitable, based upon the career graph of such an officer, unless there is anything adverse in the service career of such an officer.

"It ought to be kept in mind that Delhi, being the Capital of India, has a unique, special and specific requirement. It has witnessed several untoward incidences and extremely challenging law and order situations/riots/crimes, which have an international implication, which in the wisdom of the Central Government necessitated appointment of an experienced officer possessing diverse and multifarious experience of heading a large Para-Military Security Force apart from other factors."