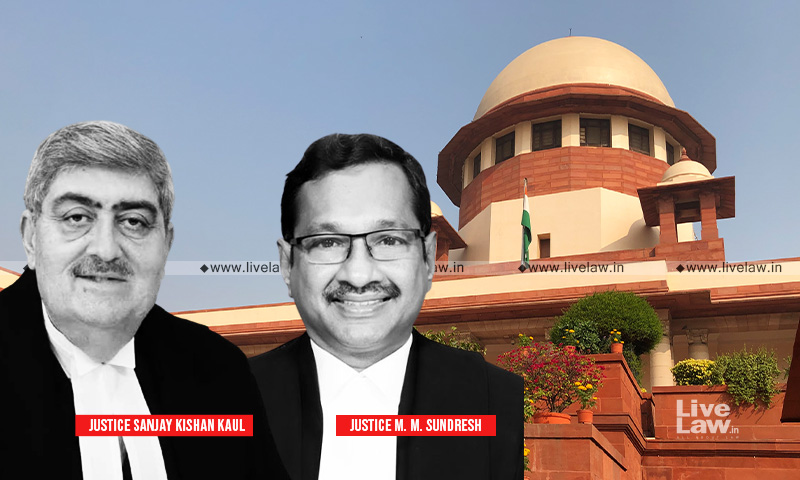 The Supreme Court on Monday recommended the Union Government to introduce a special enactment in the nature of a "Bail Act" to streamline the grant of bail.

"The Union of India may consider the introduction of a separate enactment in nature of a bail act, so as to streamline the grant of bails", a bench comprising Justices Sanjay Kishan Kaul and MM Sundresh observed in the judgment in the case Satender Kumar Antil versus Central Bureau of Investigation.

In this regard, the Court referred to the Bail Act in United Kingdom.

The bench also passed a slew of directions to ensure compliance of proper procedure for arrest and setting time limit for disposal of bail pleas.

"The Bail Act of United Kingdom takes into consideration various factors. It is an attempt to have a comprehensive law dealing with bails by following a simple procedure. The Act takes into consideration clogging of the prisons with the undertrial prisoners, cases involving the issuance of warrants, granting of bail both before and after conviction, exercise of the power by the investigating agency and the court, violation of the bail conditions, execution of bond and sureties on the unassailable principle of presumption and right to get bail. Exceptions have been carved out as mentioned in Schedule I dealing with different contingencies and factors including the nature and continuity of offence. They also include Special Acts as well. We believe there is a pressing need for a similar enactment in our country. We do not wish to say anything beyond the observation made, except to call on the Government of India to consider the introduction of an Act specifically meant for granting of bail as done in various other countries like the United Kingdom. Our belief is also for the reason that the Code as it exists to day is a continuation of the preindependence one with its modifications. We hope and trust that the Government of India would look into the suggestion made in right earnest".

The Court issued a slew of directions as follows :

a) The Government of India may consider the introduction of a separate enactment in the nature of a Bail Act so as to streamline the grant of bails.

b) The investigating agencies and their officers are duty-bound to comply with the mandate of Section 41 and 41A of the Code and the directions issued by this Court in Arnesh Kumar (supra). Any dereliction on their part has to be brought to the notice of the higher authorities by the court

c)The courts will have to satisfy themselves on the compliance of Section 41 and 41A of the Code. Any non-compliance would entitle the accused for grant of bail

d) All the State Governments and the Union Territories are directed to facilitate standing orders for the procedure to be followed under Section 41 and 41A of the Code while taking note of the order of the High Court of Delhi dated 07.02.2018 in Writ Petition (C) No. 7608 of 2018 and the standing order issued by the Delhi Police i.e. Standing Order No. 109 of 2020, to comply with the mandate of Section 41A of the Code.

e) There need not be any insistence of a bail application while considering the application under Section 88, 170, 204 and 209 of the Code.

f)There needs to be a strict compliance of the mandate laid down in the judgment of this court in Siddharth(in which it was held that investigating officer need not arrest each and every accused at the time of filing chargesheet).

h) The High Courts are directed to undertake the exercise of finding out the undertrial prisoners who are not able to comply with the bail conditions. After doing so, appropriate action will have to be taken in light of Section 440 of the Code, facilitating the release.

i) While insisting upon sureties the mandate of Section 440 of the Code has to be kept in mind.

j) An exercise will have to be done in a similar manner to comply with the mandate of Section 436A of the Code both at the district judiciary level and the High Court as earlier directed by this Court in Bhim Singh (supra), followed by appropriate orders.

l) All State Governments, Union Territories and High Courts are directed to file affidavits/ status reports within a period of four months.

Accused Entitled To Bail If Arrest Was In Breach Of Sections 41, 41A CrPC : Supreme Court