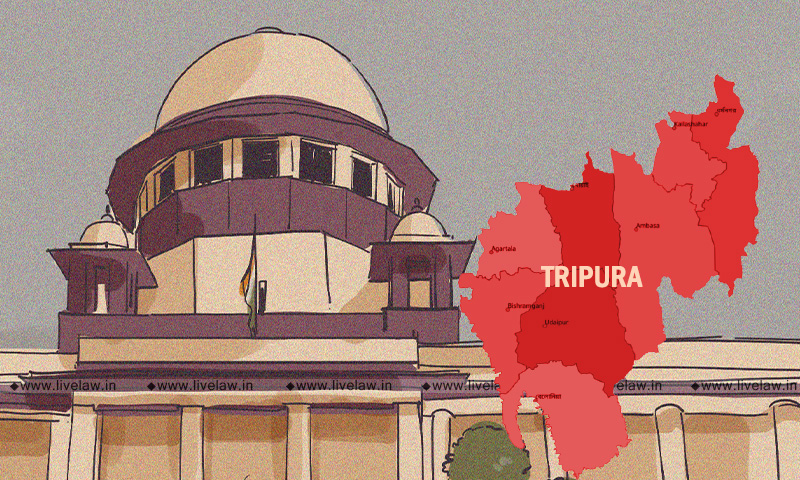 The Supreme Court on Tuesday turned down a plea made by All India Trinamool Congress to postpone the Tripura local body elections scheduled on November 25 on account of alleged acts of violence and intimidation against TMC members.However, the Court issued additional directions to the Tripura police to enhance the security arrangements for the smooth conduct of the polling and the declaration...

The Supreme Court on Tuesday turned down a plea made by All India Trinamool Congress to postpone the Tripura local body elections scheduled on November 25 on account of alleged acts of violence and intimidation against TMC members.

However, the Court issued additional directions to the Tripura police to enhance the security arrangements for the smooth conduct of the polling and the declaration of results.

"Postponing elections is a matter of last and extreme recourse. It is our considerate view that, short of postponing elections, the apprehensions expressed by the petitioners can be suitably redressed by issuing suitable directions to the State of Tripura so as to ensure that the remaining phases of municipal elections take place in a safe and secure manner and the reports of law and order which have been drawn to the attention of enforcement agencies are dealt with in accordance with law", the bench comprising Justices DY Chandrachud and Vikram Nath observed in the order.

The Court also directed the Tripura police to act in an even-handed and non-partisan manner to redress the grievances of AITC that its supporters and candidates were unfairly targeted during the campaign.

"..we are equally of the view that it is the duty of the DGP , IGP and Home Secretary to assuage any misgivings about the fairness of the law enforcement machinery in supporting the electoral process. The law enforcement agencies must discharge their duty in an even handed and nonpartisan manner to obviate the grievances that the candidates and supporter of AITC are unfairly targeted by contesting political groups", the bench stated in its order.

The bench was hearing a contempt petition filed by All India Trinamool Congress and its Rajya Sabha MP Sushmita Dev alleging non-compliance on the part of Tripura authorities of the order passed by the Supreme Court on November 11 to ensure free and safe atmosphere for political campaigning for the local body elections scheduled on November 25.

The bench took note of the signed statements filed by the Director General of Police of Tripura and the Inspector General of Police (Law & Order, Tripura) regarding the deployment of paramilitary forces in the state. The bench noted that 3 battalions of CRPF are stationed in the state. Though the State made a requisition before the Ministry of Home Affairs for three additional battalions, the MHA, having regard to the need in Jammu and Kashmir, instructed CRPF Agartala to provide 3 companies by "thinning out" from the existing deployment.

In this backdrop, the Court issued these directions as well :

1. The DGP and the IGP(Law & Order Tripura) shall hold a joint meeting with the State Election Commission by tomorrow morning for the purpose of assessing the availability of sufficient strength of paramilitary forces drawn from CRPF for ensuring the peaceful conduct of elections.

2. After making an assessment of situation of ground, if so required, a requisition shall be submitted to the CRPF or MHa, as the case may be. Any such request shall be duly considered having regard to the ground situation and in the interest of peace, security and orderly conduct of elections in the state of Tripura.

3. The DGP and IG shall take all steps to ensure that the election process is conducted in a peaceful and ordely manner without any disruption, particularly on the date of polling, leaving up to the counting on November 28.

"Since a serious grievance has been expressed by the petitioners that despite the lodging of FIRs no action has been taken, the respondents shall submit before this court a tabulated statement of the complaints which have been lodged, FIR which have been registered, action which has been taken and arrests which have been made", the Court further directed. The Court will consider the matter next on November 25 to ascertain compliance.

Senior Advocate Jaideep Gupta, appearing for Trinamool Congress, submitted that even after the Supreme Court direction, the security situation in Tripura has worsened, and the attacks against the party workers were going on. The senior counsel submitted that one TMC member Shahini Ghosh was attacked during campaign and despite being a victim, a criminal case was registered against her.

"Political workers are being driven out. Kindly consider how much effect will it have on voters. Will the voters come out ? We are asking for committee of observers", Gupta urged after submitting a document containing visuals of the alleged acts of violence. He even went to the extent of submitting that the situation is such that elections cannot be held in a peaceful manner, and the Supreme Court ought to consider postponing the same.

"There are elections on 25th, these are panchayat elections, your lordship may consider for postponing the same", Gupta submitted. Senior Advocate Gopal Shankaranarayanan, also appearing for the petitioners, submitted that there are instances of elections being postponed due to law and order problems. He added that due to the violence, the TMC members have not been able to do campaigning, and another party had to withdraw from contest due to fear of violence. In such a circumstances, it is meaningless to allow the polling on November 25, he argued.

Senior Advocate Mahesh Jethmalani, appearing for the State of Tripura, submitted at the outset that the petitioners approached the Supreme Court when their petition in the Tripura High Court was pending.

Then Justice Chandrachud pointed out that this fact was revealed by the petitioners on the first day itself, and that they had approached the Supreme Court as the High Court was not taking up the petition due to vacations.

Jethmalani submitted that the police has registered FIRs in respect of the violent incidents but arrests could not be made in all cases in view of the guidelines in the "Arnesh Kumar case".

The bench wanted to know from Jethmalani what is being done by the authorities to enhance the security situation.

"Mr Jethmalani, you tell us, what are you going to do today? Tell us who is incharge of security?", Justice Chandrachud asked.

The DGP will be in overall in-charge, Jethmalani replied. Justice Chandrachud then wanted to know if any para-military force was there to take care of security. The judge also referred to the allegations of the petitioners that a rival politician was exhorting his followers to attack them.

The bench then asked Jethmalani to get detailed instructions from the State Government and the DGP regarding the security arrangements and the need to deploy central forces in disturbed areas and passed over the case to afternoon.

When the case was taken again at 3.45 PM, Jethmalani presented the signed statement of the DGP and IG before the bench, taking note of which the order was passed.