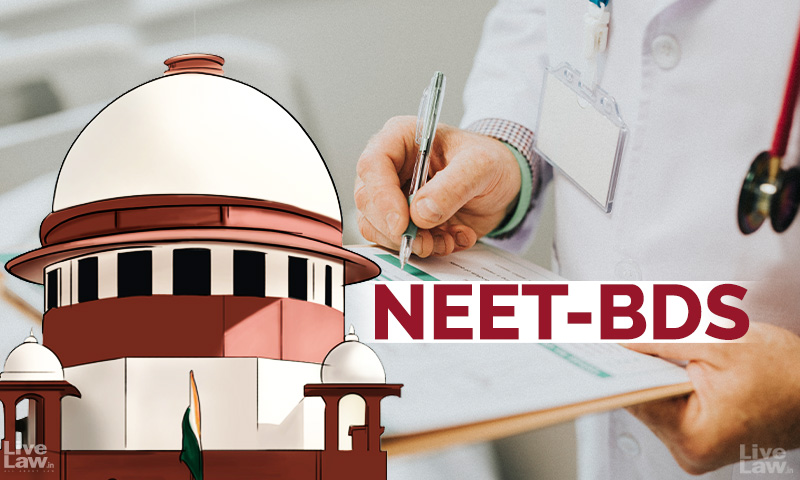 The Supreme Court on Tuesday refused to entertain a petition seeking the reduction of qualifying percentile for admissions to Bachelor of Dental Surgery(BDS) courses as per the NEET-BDS 2021 exam.

The Court had earlier directed the Union Ministry of Health and Family Welfare to consider lowering the cut-off percentile as recommended by the Dental Council of India.

However, the Union stuck to its stand that the cut-off percentile need not be reduced and rejected the recommendation made by the DCI to lower the cut-off percentile by 10 percentile. In the affidavit filed today, the Centre informed the counselling for BDS course commenced on January 17 and concluded on May 15 2022 and classes commenced on February 14, 2022. The Centre further said that the NEET-UG 2022-23 is scheduled to take place on July 17.

As regards the petitioner's contention that BDS seats are lying vacant, the Centre said that 2445 and 5218 seats remained vacant in 2019-20 and 2020-21 respectively as well when the cut-off was reduced by 10 percentile.

"It was decided that lowering of percentile would not be in public interest as it would disturb the merit requirement for BDS course and there are sufficient eligible candidates for the vacant seats. Further, the current curriculum is already 8 months behind the schedule and additional round of counselling is not in the best academic interest of students", the Centre's affidavit stated.

Senior Advocate PS Patwalia, appearing for the petitioners, submitted that the decision of the Union to not reduce the cut-off inspite of the recommendation made by the DCI is "arbitrary and irrational".

Patwalia sought to distinguish the earlier cases, where the Court rejected pleas to reduce cut-off in NEET exams, by saying that in this case, the expert body, the DCI, has recommended the lowering of cut-off. He pointed out that the the cut-off was lowered for MDS and SS courses.

"Ultimately, the thing is in Govt medical colleges only few seats are vacant. Suppose we issue mandamus that reduce it by 5, there will still be vacant seats. Then someone will say why not 10. Somewhere we've to draw a line", Justice Chandrachud said.

"At some point there has to be finality. Under the regulations, the Centre has the discretion to not accept the recommendation. Can we say their reasons are so manifestly arbitrary?", Justice Chandrachud asked.

Patwalia submitted that the fee structure of private colleges are fixed on the assumption that all seats are filled. "So if 60% seats are vacant the whole edifice of that fixation collapses", the senior counsel submitted.

"Unless their decision is extremely arbitrary, how do we interfere?. Ultimately it is their policy decision. What yardstick do we apply? We shouldn't be entering into this. When we start issuing mandamus to lowering standards, there will be no end to this", Justice Chandrachud said.

Faced with the disinclination of the bench to entertain the matter, the senior counsel sought liberty to withdraw the petition. Accordingly, the petition was dismissed as withdrawn.