'We Are Sure Govt Is Enquiring': Supreme Court Refuses To Entertain Pleas Seeking Probe Into Tractor Rally Violence 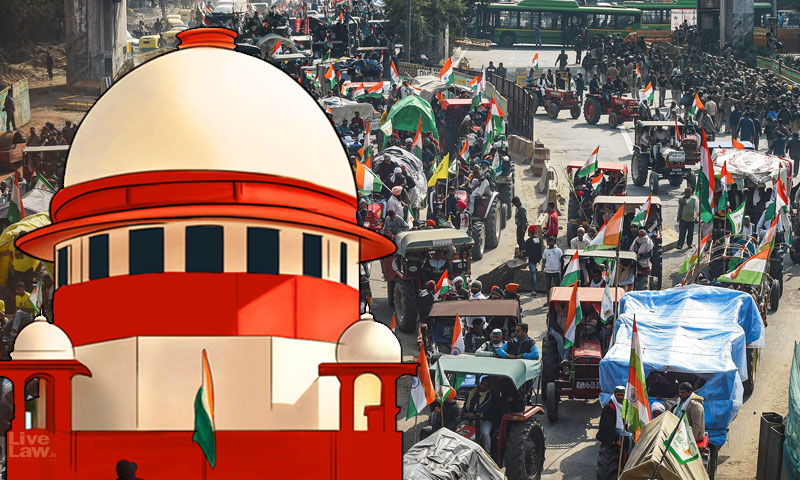 The Supreme Court on Wednesday refused to entertain a batch of petitions which sought enquiry into the violence during farmers' tractor rally held in the national capital on the Republic Day. The Court allowed the petitioners to withdraw the plea with liberty to approach the appropriate Government Minstry. The Chief Justice of India SA Bobde, presiding the bench, orally observed that...

The Supreme Court on Wednesday refused to entertain a batch of petitions which sought enquiry into the violence during farmers' tractor rally held in the national capital on the Republic Day. The Court allowed the petitioners to withdraw the plea with liberty to approach the appropriate Government Minstry. The Chief Justice of India SA Bobde, presiding the bench, orally observed that the government is already inquiring the matter and asked the petitioners to approach the appropriate Ministry with a representation.

"We are sure that the government is enquiring into it and taking appropriate action. We read a statement of Prime Minister Narendra Modi in press that that Law will take its own course. So the government is already investigating it", the CJI stated.

In response to the Counsel's apprehension that both sides will not be heard, CJI stated that:

"You just assume it will be one sided? Of course both sides will be heard, that is how an investigation works".

Further, the Court refused to consider another PIL which sought protection of common men and police officers during protests. The bench said that the same order issued in the other cases - allowing the sending of representations - will apply in this PIL as well.

A bench comprising Chief Justice S A Bobde and Justices A S Bopanna and V Ramasubramanian heard the petitioners.

One of the pleas filed by advocate Vishal Tiwari sought setting up of a three-member inquiry commission under the chairmanship of a former apex court judge and comprising of two retired high court judges for collecting and recording evidence and submit a report on the January 26 violence to the top court in a time bound manner.

He has also sought direction to the concerned authority to lodge FIRs against individuals or organisations responsible for the violence and causing dishonour of the National Flag on January 26.

Another petition filed by advocate Manohar Lal Sharma sought a direction to the concerned authority as well as the media not to declare farmers as "terrorist" without any evidence.

Sharma has claimed in his plea that there was a planned conspiracy to sabotage the protest by farmers' and they were allegedly declared as terrorist without any evidence.

The Delhi police had allowed the tractor parade by the farmers unions on designated routes after the Supreme Court refused to entertain an application filed by it seeking injunction against the farmers rally. However, violent events took place on the republic day, with clashes between police and protesters. A group of protesters deviated from the designated routes, breaking barricades, and reached the Red Fort and hoisted a religious flag in its premises, amid widespread violence and destruction of public properties. A sikh youth lost life during the tractor rally.

On January 12, the apex court had stayed the implementation of the contentious new farm laws till further orders and constituted a four-member committee to make recommendations to resolve the impasse over them between the Centre and farmers' unions protesting at Delhi borders.

However, the protesting unions said that they will no appear before the Committee as all its members were supporters of the implementation of the laws.

Thousands of farmers, mainly from Punjab, Haryana and western Uttar Pradesh, are protesting at various border points of Delhi for over a month now against the three laws -- the Farmers' Produce Trade and Commerce (Promotion and Facilitation) Act, the Essential Commodities (Amendment) Act, and the Farmers (Empowerment and Protection) Agreement on Price Assurance and Farm Services Act.