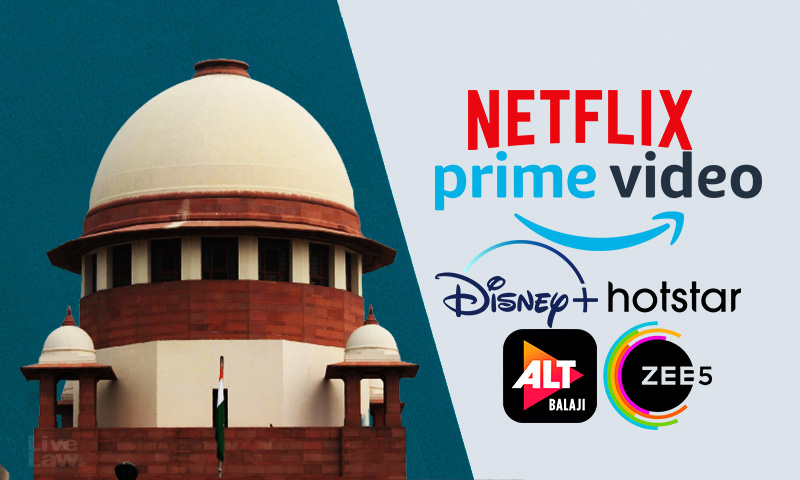 The Bench was hearing a batch of pleas filed for regulation of content on these online media streaming platforms like Netflix, Amazon Prime Video, Hotstar etc by the government.

The Court observed that it will not transfer it today as service is not complete. The Bench has decided to hear the matter in second week after Holi, and asked SG Mehta to ensure that service be completed in meantime by taking all requisite steps.

During the hearing today, Solicitor General Tushar Mehta submitted before the court that the matter would need to be heard, and may be posted after holi. He added that a transfer petition has been filed by the government as more than one High Courts are dealing with same subject matter.

SG Mehta added that he has been informed that in one of the High Courts it was expressed that they will proceed unless the top court decides to stay the case.

The Bench observed that normally when notice issued in a transfer it is assumed that it is stayed.

"The moment actually a notice is issued in a transfer its an indication, and judges then say that alright its pending before Supreme Court." Justice Chandrachud observed.

The Court was informed that the order has been passed by Punjab and Haryana High Court.

Senior Advocate Gopal Jain submitted that the Punjab and Haryana High Court through its order on 24th November clarified that on next date it will be considered and decided irrespective of the fact that the Supreme Court is hearing it.

The Court was informed that a recent order was passed on 16th March. SG Mehta informed the Court that they are considering the case on merits. The Court observed that it has been informed that Punjab and Haryana High Court is proceeding on merit. The Court therefore ordered a stay on any further proceedings, as notice has already been issued on the transfer plea.

Justice Shah stated that as there are multiple High Courts where related cases are pending, a stay can be ordered on all proceedings. Justice Chandrachud agreed and stated that the order will be edited to include a stay on proceedings before all HCs to be stayed till matter is pending before the Supreme Court. It was on December 20 last year that the transfer petition was filed through the Secretaries of the Ministries of Information & Broadcasting, Electronics & Information Technology and Law & Justice.

On February 9, a division bench of Justices S Abdul Nazeer and SanjivKhanna issued notice to the respondents on the petition and listed the matter on March 23 by tagging it with another pending petition filed by an NGO named "Justice For Rights Foundation" seeking the regulation of OTT platforms.

The petitioner NGO Justice For Rights Foundation, through its rejoinder submitted before Supreme Court that an effective control of content on OTT platforms cannot be done without legislation, and regulation of these platforms by statutory body is necessary in interest of public morality and decency. The rejoinder affidavit was filed in response to the counter affidavit filed by Central government and Ministry of Communications.

According to the petitioner the online web platforms needs to be regulated by a statutory body in interest of public morality and decency as the content available on such platforms being non-licensed and non-censored is available in general public without any reasonable restrictions being imposed.

The present petition by Justice for Rights Foundation was filed against Feb 8th 2019 judgement of the Delhi High Court. The NGO had claimed that online media streaming platforms show content which is "unregulated and uncertified" for public viewing.

The Delhi High Court bench of Chief Justice Rajendra Menon and Justice V K Rao rejected the petition after the Ministry of Information and Broadcasting informed it that online platforms are not required to obtain any licence from the ministry.