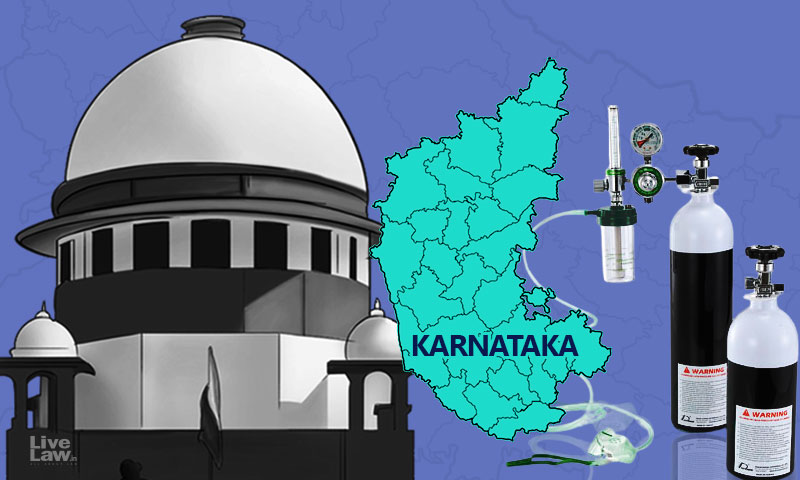 The Supreme Court on Friday rejected the challenge made by the Central Government against the direction issued by Karnataka High Court to increase the daily quota of liquid medical oxygen for the State of Karnataka as 1200 MT."It is a well-calibrated, well-considered judicial exercise by the High Court", Justice Chandrachud told the Solicitor General at the very outset."We will not leave...

The Supreme Court on Friday rejected the challenge made by the Central Government against the direction issued by Karnataka High Court to increase the daily quota of liquid medical oxygen for the State of Karnataka as 1200 MT.

"It is a well-calibrated, well-considered judicial exercise by the High Court", Justice Chandrachud told the Solicitor General at the very outset.

"We will not leave the citizens of Karnataka in the lurch", the judge said.

Observing that the "High Court has correctly examined the demand," the bench said that it will not interfere with the High Court's direction.

The Solicitor General Tushar Mehta said that his objection was to the High Courts interfering with the Centre's oxygen allocation plan in a time of crisis.

"Every state needs it(oxygen), but my concern is only with the High Court directing it. If every High Courts starts doing it, it will be a problem", the SG submitted. The Centre was willing to sit together with the officials of Karnataka to resolve the issue, the SG said.

The bench said that the High Court did not pass the order in a reckless manner as it was based on the State's projection of oxygen demand, which was a minimum of 1100 MT. The High Court had first directed the Centre to consider the State's demand, and passed the order on the next day, after noting that the oxygen quota was not adequately increased. Meanwhile, a tragedy occurred in a COVID facilitiy in Bengaluru, where around 22 patients died due to lack of oxygen.

"The High Court has furnished adequate reasons for passing the ad-interim order having regard to fact that the projection of demand made by the State was a minimum of 1162 MT oxygen per day. The direction of the High Court is only an ad-interim direction. The order of the High Court does not preclude a mutual resolution between the Cntre and the State. At this stage order, we find the High Court order careful, calibrated and a judicial exercise of power", the bench comprising Justices Chandrachud and MR Shah said in the order.

Justice Chandrachud observed during the hearing that the High Court passed the order taking note of the deaths if Chamrajnagar, Kalburgi etc., due to shortage of oxygen.

On noting that the bench was not inclined to interfere with the order, Solicitor General Tushar Mehta said "We are ready to give entire quantity(of oxygen) to High Courts. Let the High Courts distribute".

The bench was considering the petition filed by Centre challenging an order passed by the Karnataka High Court on May 5 directing the Centre to increase the daily liquid medical oxygen allocation for Karnataka as 1200 MT.

The High Court had passed the order yesterday after taking note of the incidents of COVID patients dying due to shortage of oxygen.

The High Court had earlier noted that though the State Government had made a demand for 1700 MT oxygen per day, the Centre had only increased it to 862 MT.