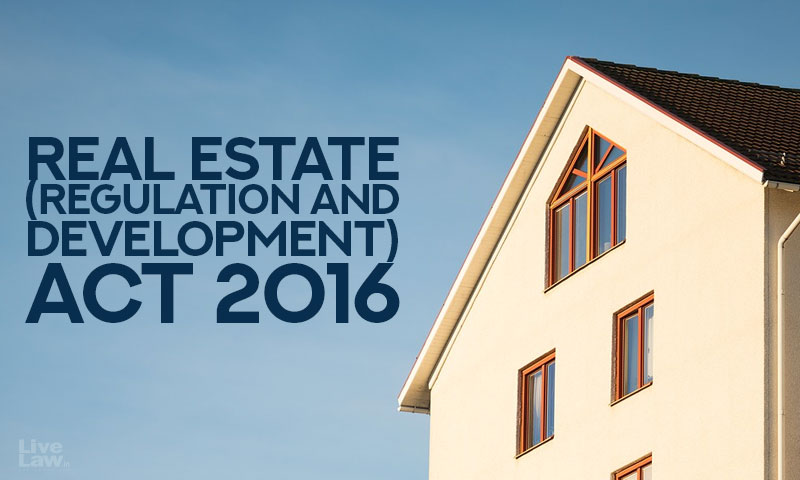 The Supreme Court in its judgment delivered on Thursday (11th November) had, inter alia, held that exercising power under Section 81, the regulatory authority is expressly permitted to delegate a single member to decide complaints filed by the homebuyers under Section 31 of the Real Estate (Regulation and Development) Act 2016 ("Act").A Bench comprising Justices Uday Umesh...

The Supreme Court in its judgment delivered on Thursday (11th November) had, inter alia, held that exercising power under Section 81, the regulatory authority is expressly permitted to delegate a single member to decide complaints filed by the homebuyers under Section 31 of the Real Estate (Regulation and Development) Act 2016 ("Act").

A Bench comprising Justices Uday Umesh Lalit, Ajay Rastogi and Aniruddha Bose delivered the judgement in a batch of civil appeals assailing the order of the Allahabad High Court which dismissed the Writ Petitions filed by the promoters/ real estate developers (appellants). The Writ Petition was filed challenging the jurisdiction of the single member of the regulatory authority in passing orders in the complaints filed by home buyers under Section 31, directing the promoters to refund the principal amount along with the interest.

Setting out the background of the power of delegation, the State of Uttar Pradesh submitted that though initially it was decided that the complaints under Section 31 would be delegated to a bench of two members, but considering the volume of complaints (about 36,826) a conscious decision to empower the single member was taken.

The promoters argued that if the court thinks it fit that apart from compensation all other elements are to be decided by the regulatory authority, then such power would vest with the authority constituted under Section 21 and further delegation under Section 81 would be sheer abuse of power. A general delegation of power to a single member is not envisaged by the statute. Placing reliance on Province of Bombay v. Kushaldas S Advani And Ors. 1950 SCR 621; Shiva Nathubhai v. Union of India And Ors. (1960) 2 SCR 775 and Harinagar Sugar Mills Limited v. Shyam Sunder Jhunjhunwala And Ors. (1962) 2 SCR 339, the promoters had submitted that the powers to be exercised by the authority are quasi-judicial in nature and some even have trappings of judicial functions. Relying on Barnand v. National Dock Labour Board 1953(2) QB 18 and Vive v. National Dock Labour Board 1956 (1) QB 658, the principles of which were later followed in Bombay Municipal Corporation v. Dhondu Narayan Chowdhury (1965) 2 SCR 929, Sahni Silk Mills (P) Ltd. And Anr. v. Employees of State Insurance Corporation (1994) 5 SCC 346, Jagannath Temple Managing Committee v. Siddha Math And Ors. (2015) 16 SCC 542, the promoters contended that even citing reasons of workload the legal mandate that delegation of judicial functions ought to be express, cannot be bypassed.

However, the Court noted that delegation of quasi-judicial powers is permissible provided there is a provision in the statute. Since Section 81 of the Act empowers such a delegation, the argument of the promoters in this regard does not hold good.

An argument was put forth by the promoters, that if workload is a serious consideration then the Government could establish more than one authority as per the terms of second proviso to Section 20(1).

The contention of the respondent (home buyers) was that delegation under Section 81 is for a limited purpose - only for the hearing of complaints under Section 31, while the numerous other powers and functions of the regulatory authority have been kept out of its purview. The respondents apprised the Court that in the challenge to a pari materia provision in the SEBI Act in Saurashtra Kutch Stock Exchange Ltd. v. Securities and Exchange Board of India And Anr. (2012) 13 SCC 501, it had upheld that power of delegation to a single member is permissible as long as there is a legislative sanction for delegation of even judicial power.

The Court noted that the provision of SEBI is indeed pari materia and the delegation to a single member by a competent authority is permissible in law.

Referring to Bombay Municipal Corporation v. Dhondu Narayan Chowdhury (1965) 2 SCR 929; State of Uttar Pradesh v. Batuk Deo Pati Tripathi And Another (1978) 2 SCC 102 and Heinz India Private Limited and Another v. State of Uttar Pradesh (2012) 5 SCC 443, the respondents submitted that power of delegation is well within the jurisdiction of the authority.

It is averred that Section 21 is limited to composition and has no bearing on the minimum strength of the bench. This arguments resonated with the Court as it observed -

"Section 21 of the Act relates to the composition of the authority...it does not mention minimum bench strength at the same time consciously prescribes minimum bench/quorum while constituting the Real Estate Appellate Tribunal as reflected under Section 43(3) of the Act."

The Court further observed that the promoters had emphasised on the quorum of meeting under Section 29. However, it clarified that Section 29 does not pertain to quasi-judicial functions of the authority, but to its policy matters which ought to be considered by the entire strength of the authority.

Apart from making regulation, the Court opined that all other powers exercised by the authority could be delegated to any of its members for expeditious disposal of complaints by a special or general order. In the present case vide special order dated 05.12.2018 power was delegated to a single member to decide complaints under Section 31. The Court also noted that the nature of enquiry under Section 31 is minimal with little scope for exercising discretion. It astutely observed that, in case of any manifest error in the order passed under Section 31, the statute provides for a in-built appeal mechanism, wherein it is appealable first to the Tribunal under 43(5) and further to the High Court under Section 58.

Examining the various aspects of the submissions made by the parties, the Court held:

"In view of the remedial mechanism provided under the scheme of the Act 2016, in our considered view, the power of delegation under Section 81 of the Act by the authority to one of its member for deciding applications/complaints under Section 31 of the Act is not only well defined but expressly permissible and that cannot be said to be dehors the mandate of law."