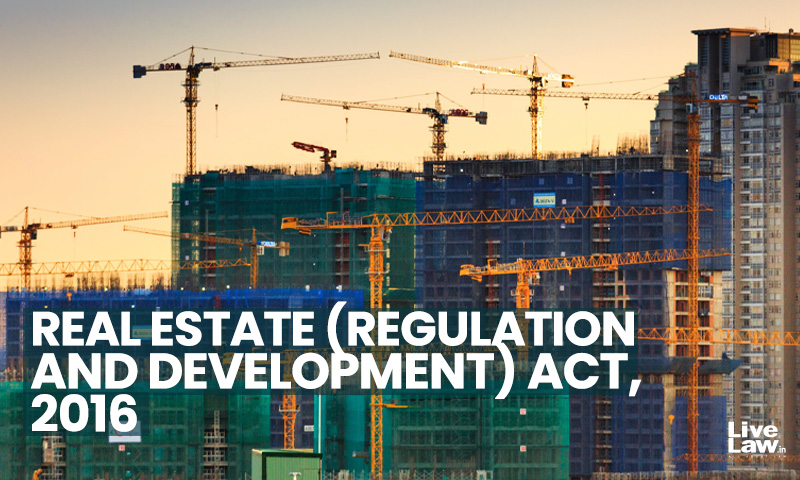 In an important judgment delivered on Thursday (11 November 2021), the Supreme Court held that the condition of pre­-deposit imposed on promoters for filing appeals under Section 43(5) of the Real Estate (Regulation and Development) Act, 2016 is neither discriminative nor violative of Articles 14 or 19(1)(g) of the Constitution of India.The legislature in its wisdom intended to ensure...

In an important judgment delivered on Thursday (11 November 2021), the Supreme Court held that the condition of pre­-deposit imposed on promoters for filing appeals under Section 43(5) of the Real Estate (Regulation and Development) Act, 2016 is neither discriminative nor violative of Articles 14 or 19(1)(g) of the Constitution of India.

The legislature in its wisdom intended to ensure that money once determined by the authority be saved if appeal is to be preferred at the instance of the promoter after due compliance of pre deposit, the bench headed by Justice UU Lalit observed. The court noted that the promoters ought to show their bona fides by depositing the amount so contemplated(case :Newtech Promoters And Developers Pvt. Ltd. vs. State of UP).
.

The bench, also comprising Justices Ajay Rastogi and Aniruddha Bose, observed thus while considering an appeal filed against Allahabad High Court judgment by some promoters. In this case, the single member of the RERA on the complaint instituted at the instance of the home buyers/allottees directed the promoter/real estate developer to refund the principal amount along with interest. The Developer approached the High Court by filing a writ petition challenging the jurisdiction of the Tribunal. This writ petition came to be dismissed by the High Court. In appeal, one of the issues considered by the court was whether the condition of pre­-deposit under proviso to Section 43(5) of the Act for entertaining substantive right of appeal is sustainable in law.

The Section 43(5) of the Act envisages the filing of an appeal before the appellate tribunal against the order of an authority or the adjudicating officer by any person aggrieved. Where the promoter intends to appeal against an order of authority or adjudicating officer against imposition of penalty, the promoter has to deposit at least 30 per cent of the penalty amount or such higher amount as may be directed by the appellate tribunal. Where the appeal is against any other order which involves the return of the amount to the allottee, the promoter is under obligation to deposit with the appellate tribunal the total amount to be paid to the allottee which includes interest and compensation imposed on him, if any, or with both, as the case may be, before the appeal is to be instituted.

In this case, the promoters challenged this pre-deposit requirements on the following grounds:

The promoters and allottees are distinctly identifiable

At the outset, the court observed that the classification between consumers and promoters is based upon the intelligible differentia.

125. The submission in the first blush appears to be attractive but is not sustainable in law for the reason that a perusal of scheme of the Act makes it clear that the limited rights and duties are provided on the shoulders of the allottees under Section 19 of the Act at a given time, several onerous duties and obligations have been imposed on the promoters i.e. registration, duties of promoters, obligations of promoters, adherence to sanctioned plans, insurance of real estate, payment of penalty, interest and compensation, etc. under Chapters III and VIII of the Act 2016. This classification between consumers and promoters is based upon the intelligible differentia between the rights, duties and obligations cast upon the allottees/home buyers and the promoters and is in furtherance of the object and purpose of the Act to protect the interest of the consumers vis­a­viz., the promoters in the real estate sector. The promoters and allottees are distinctly identifiable, separate class of persons having been differently and separately dealt with under under the various provisions of the Act

Multiple statutes which provide a condition of predeposit

The court also noted that there are multiple statutes which provide a condition of predeposit of a stipulated statutory amount to be deposited before an appeal is entertained by an appellate forum/tribunal for reappraisal of facts and law at the appellate stage: Section 18 of SARFAESI Act, 2002 -Section 65(1) of the Rajasthan Stamp Act, 1998- Section 19 of the Consumer Protection Act, 1986 Section 19 of the Micro, Small and Medium Enterprises Development Act, 2006- Section 62(5) of the Punjab Value Added Tax Act, 2005. The court also referred to the Supreme Court judgments that have dealt with these provisions. The bench therefore held as follows:

136. It is indeed the right of appeal which is a creature of the statute, without a statutory provision, creating such a right the person aggrieved is not entitled to file the appeal. It is neither an absolute right nor an ingredient of natural justice, the principles of which must be followed in all judicial and quasi­ judicial litigations and it is always be circumscribed with the conditions of grant. At the given time, it is open for the legislature in its wisdom to enact a law that no appeal shall lie or it may lie on fulfilment of precondition, if any, against the order passed by the Authority in question.

137. In our considered view, the obligation cast upon the promoter of pre­deposit under Section 43(5) of the Act, being a class in itself, and the promoters who are in receipt of money which is being claimed by the home buyers/allottees for refund and determined in the first place by the competent authority, if legislature in its wisdom intended to ensure that money once determined by the authority be saved if appeal is to be preferred at the instance of the promoter after due compliance of pre­deposit as envisaged under Section 43(5) of the Act, in no circumstance can be said to be onerous as prayed for or in violation of Articles 14 or 19(1)(g) of the Constitution of India.