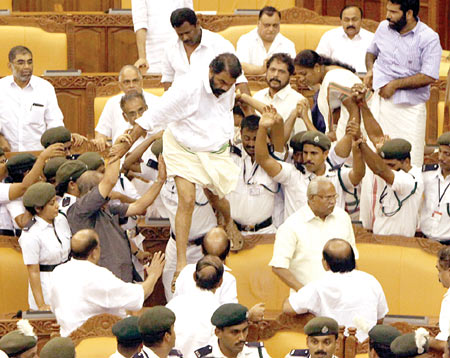 x
"The fact of the matter is that it is public property and government is the custodian of the public property", Justice Chandrachud remarked before closing the arguments.

The Supreme Court on Thursday reserved judgment in the petition filed by the Kerala Government seeking withdrawal of criminal prosecution against 6 CPI(M) members in the 2015 assembly ruckus case.A division bench comprising Justices DY Chandrachud and MR Shah reserved the judgment after an elaborate hearing which lasted for nearly four hours."The fact of the matter is that it is public...

The Supreme Court on Thursday reserved judgment in the petition filed by the Kerala Government seeking withdrawal of criminal prosecution against 6 CPI(M) members in the 2015 assembly ruckus case.

A division bench comprising Justices DY Chandrachud and MR Shah reserved the judgment after an elaborate hearing which lasted for nearly four hours.

"The fact of the matter is that it is public property and government is the custodian of the public property", Justice Chandrachud remarked before closing the arguments. Justice Shah asked why the State Government was pursuing the withdrawal application by raising the defence arguments which ought to be raised by the accused. The bench observed that the point to be examined is if the withdrawal application was advancing public interest.

Earlier, the Chief Judicial Magistrate of Thiruvananthapuram and the High Court of Kerala had rejected the withdrawal application, following which the Kerala Government approached the Supreme Court through a special leave petition. Some of the accused persons also moved the Supreme Court.

Senior Advocate Ranjit Kumar, appearing for the State Government, started the arguments by saying that the incident happened when then government in 2015 was presenting the budget. There were allegations of corruption against the then government, against which the opposition was protesting. The presentation of budget happened in a charged atmosphere. The senior counsel said that the ruckus erupted after a lady member from the opposition was injured in the melee.

"It was a ruckus between both the parties. The members of the ruling party were also equally at fault. A complaint was filed against them at the instance of a lady member of opposition", he said.

At this juncture, Justice Chandrachud mentioned that even arguments in courts also happen sometimes in a "vituperative and charged atmosphere". Will that justify destruction of court property, he asked.

"We want to know what was the larger public interest in withdrawing the prosecution", the judge asked.

"In student or labour agitation, you may not want to prosecute them. What you are submitting is that this is a case of political manifestation", Justice Chandrachud remarked.

Ranjit Kumar relied on the judgment in the Baroda Dynamite case to argue that cases of political nature could be withdrawn to bring a quietus to the issue. He also argued that the acts were covered under legislative privileges. The authority to take action with respect to a conduct in the house vests with the Speaker. Once the Speaker has taken action against them for breach of conduct (they were suspended for a week), the criminal prosecution is unwarranted, he argued.

"A protest is also a speech. It is a manner of freedom of speech. The right is given. The breach of code of conduct of House provides for that. Maybe there was breaking of furniture. But it was still a form of speech and a form of protest", Ranjit Kumar argued.

Senior Advocate Jaideep Gupta, appearing for some of the accused, submitted " In 2015, there was a ruckus and in that ruckus, property was destroyed. Today a new government has come to place. If the PP feels that this was a political issue and there is no reason to agitate it and that it would be the subject of media. It might be a ground for withdrawal. Is it a situation where decision taken by the PP destroys the law of the land ? This is my primary submission. I cannot go into the defence", he said.

Senior Advocate Mahesh Jethmalani, appearing for an intervenor, opposed the petition. He said that the protection of legislative privileges cannot be claimed for vandalism committed within the house.

"Parliamentary privileges are intended to be enjoyed on behalf of the people in their interests.If you damaged public property out of taxpayers money then how can you claim privilege. Privileges are those rights which are necessary for the house to perform its legislative functions. None enjoys any privilege against any criminal proceedings", he argued.

He also said that the withdrawal application was against the objectives of the Prevention of Damage to Public Property Act.

On the last hearing date, the bench had made oral observations disapproving the attempt of the state to withdraw the case against the legislators.

"Prima facie, we have to take a strict view. This sort of behaviour is unacceptable. We will not condone this sort of behaviour of an MLA who destroyed public property. You have to face trial",Justice Chandrachud had told Senior Advocate Ranjit Kumar who was appearing for the State.

The State's counsel submitted that the MLAs were suspended by the Speaker for their behaviour. He also contended that criminal prosecution for the acts committed inside the assembly were unwarranted, as it was appropriately dealt with as per the rules of house.

Justice Chandrachud had said that they have to face trial under the Prevention of Damage to Public Properties Act. He also wondered what was the public interest being pursued by the state through its application to withdraw prosecution under Section 321 of the Code of Criminal Procedure.

"What is the larger public interest in shielding an MLA who has obstructed the passage of Finance Bill?", Justice Chandrachud had asked.

"The Finance Minister was facing corruption charges and they were protesting", the senior counsel had replied.

"Irrespective of the personality of the Finance Minister, presentation of finance bill is of utmost importance", Justice Chandrachud had responded.

"They have the right to protest", said Senior Advocate Ranjit Kumar. "Not in this manner", Justice Chandrachud had retorted.

Justice Shah had added that the MLAs, being the representatives of people, have to give a message to the society.

The SLP of State of Kerala is filed against the March 12 judgment of a single bench of the Kerala High Court which had dismissed the State's Revision Petition against the refusal of Chief Judicial Magistrate, Thiruvananthapuram, to allow the withdrawal of prosecution in these cases under Section 321 of the Code of Criminal Procedure.

Justice VG Arun of High Court had observed that the withdrawal of prosecution "will not advance public justice". The High Court had also rejected the argument that the accused were entitled to protection of legislative privileges, observing that the alleged acts were not "acts done in furtherance of the free functioning of the house."

In the plea before the Top Court, the Kerala Government has submitted that the acts happened during a protest staged against the presentation of budget by the then Finance Minister KM Mani, who was facing allegations of involvement in bar-bribery scam.

It is argued that the High Court failed to appreciate that the alleged acts took place while the Assembly was in session, and hence no FIR could have been lodged without the sanction of the Speaker. The FIR was registered by the Secretary of the Legislative Assembly without the consent of the Speaker, it is stated.

Entitled to protection of legislative privileges

The petition raises the argument that the accused persons, who were then MLAs, are entitled to the protection of legislative privileges for their acts committed at the floor of the house.

"Articles 105(3) and 194(3) of the Constitution of India confer certain privileges and immunities to the members of the Parliament and State Legislature. The act of the accused being in relation to their function as members of the Legislative Assembly, no criminal proceedings can be initiated", the plea submits.

Referring to Chapter 12 of text book Practice and Procedure of Parliament by Kaul and Shakdher, the State of Kerala argues that acts committed in Assembly, even if punishable offences, are to be reckoned as part of the proceedings of the House, for the purpose of the protection of the members. At best, their action will only amount to breach privilege or code of conduct for which only the Speaker is empowered to take action.

"The Learned single judge failed to consider the legal proposition that with regard to a crime committed in Parliament, the house in which it was committed might claim the right to decide whether to exercise its own jurisdiction or to hand the offender over to criminal courts. In taking this decision, it would no doubt guided in the nature of the offense and the adequacy or inadequacy of the penalty, some what lacking in feasibility, which it could indict. However, there is no decision by the house in this case, and the collective protection available to the members of the house was also ignored by the learned Single Judge. The learned Single Judge failed to consider article 105(3) of the Constitution of India and there is absolutely no discussion with regard to the said privileges and immunities of the house, as a whole", the petition reads.

It is argued that the High Court failed to see that the withdrawal applications were filed by the Public Prosecutor in good faith and public interest. There is no justification on the presumption that the petition was filed without good faith and on extraneous influence.

Six members of CPI(M) were booked under the Indian Penal Code and the Prevention of Damage to Public Property Act for the vandalism in the house. Out of the accused, V Sivankutty is now the Education Minister in the present second term of the LDF government. EP Jayarajan and KT Jaleel, who were ministers in the previous LDF government, CPIM members CK Sahadevan, K Ajith and K Kunhammed are the other accused.

Case: The State Of Kerala Versus K.Ajith And Ors