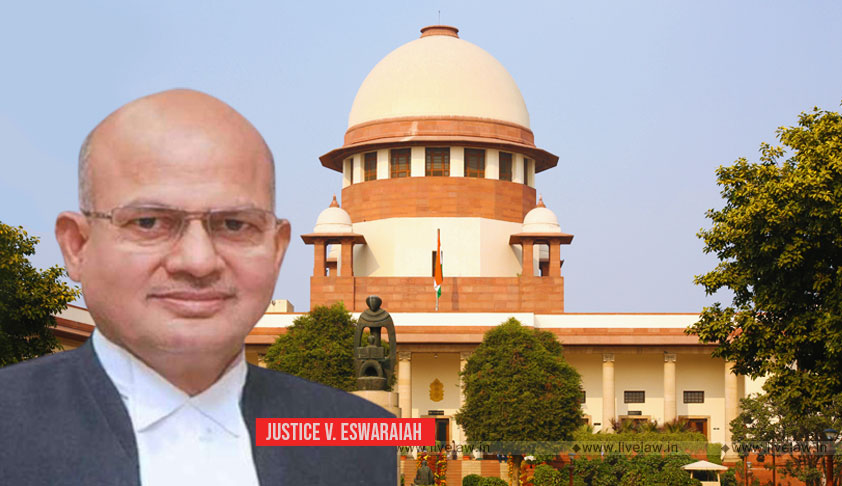 The Supreme Court on Monday reserved its judgment on a petition filed by former AP High Court judge V Eswaraiah against an order of the AP HC ordering judicial enquiry into an alleged phone conversation between him and a District Judge plotting "conspiracy" against HC CJ and a sitting SC judge. A bench comprising Justices Ashok Bhushan and R Subhash Reddy said that it...

The Supreme Court on Monday reserved its judgment on a petition filed by former AP High Court judge V Eswaraiah against an order of the AP HC ordering judicial enquiry into an alleged phone conversation between him and a District Judge plotting "conspiracy" against HC CJ and a sitting SC judge.

A bench comprising Justices Ashok Bhushan and R Subhash Reddy said that it will consider Eswaraiah's request to set aside the High Court order on the ground that the same was passed without hearing him, and without giving him any notice of the proceedings.

During the hearing, Advocate Prashant Bhushan appearing for Justice Easwariah submitted that the High Court has passed the impugned order in a "strange" manner, while hearing an unconnected petition. He said,

"Here what the HC has done is that...they were hearing a matter related to a death of a HC staff due to COVID due to non-following of protocols in HC. In that case, a suspended district judge files an impleading petition and produces the alleged conversation between him and Easwariah."

After hearing both the parties, Justice Bhushan said that if the High Court wants to proceed, it may do so after giving notice to Justice Easwariah.

"His (Justice Easwariah) grievance is that the order was passed without hearing him," Justice Bhushan noted.

However, when Bhushan insisted that the order ought to be set aside for having been passed without hearing the concerned party, Justice Bhushan responded that he will consider this submission.

During the hearing, Advocate Prashant Bhushan contended that a case of criminal conspiracy is not made out on a perusal of the entire transcript and alleged that the recordings produced by the suspended District Judge were tampered. He submitted,

"I have filed a correct transcript of the conversation. It is a private conversation. The District Judge has taken it to the media. I have said that there is no criminal conspiracy in the converations."

Bhushan submitted that the conversation between Easwariah and the District Judge was three fold:

He insisted that nothing about the above said conversation should be a matter of enquiry and yet, if the Court decides to proceed with the matter and examine the private conversation, then there should be an enquiry into the whole thing.

"I have talked about certain land transactions by a sitting judge of this Court. Enquire into that too," Bhushan submitted.

They alleged that the transcripts submitted by Easwariah are edited out and sought time to file affidavits.

Prashant Bhushan opposed the intereventions by Sibal and Salve by saying that they are mala fide.

"At whose behest they are appearing. Who are paying their fees?", Bhushan asked.

However the bench said that it will not go into that question. The bench also observed that it cannot hold an enquiry into what has been missed out and not missed out from the transcript.

Salve submitted that the petitioner was using the opportunity given to him by the Court to "push his agenda by making allegations against a Supreme Court judge".

The Supreme Court had last  month required Justice Eswaraiah to file regarding alleged private phone conversation with Mr. S. Ramakrishna, a suspended District Munsif Magistrate of Andhra Pradesh, into which an inquiry has been ordered by the High Court.

The High Court requested former Supreme Court judge Justice RV Raveendran to enquire into the matter.  After it was alleged that the phone call disclosed a "serious conspiracy" against the High Court Chief Justice and a senior sitting Judge of the Supreme Court, the Andhra Pradesh High directed an investigation by a retired Supreme Court judge into it, against which order Justice Eswaraiah has moved the top court.

In his affidavit, through advocate Prashant Bhushan, he, however, admits that the suspended District Munsif Magistrate had called him over WhatsApp on 20th of July, 2020, but that he does not know from which phone number he had called. He also denies the contention that he had, through his PA, required the said Magistrate to call him.

"I cannot say that the conversation as contained in the pen drive is the exact conversation. The voice appears to be mine and therefore, that part of what I have purported to have said appears to be correct. It is, however, possible that some parts of the conversation that took place have been edited out. Therefore, the conversation as contained in the pen drive may not be the conversation that took place with me to the extent that it is called. It would be pertinent to state here that since WhatsApp is end-to-end encrypted and it does not have a recording feature, as such the recording by the suspended District Munsif magistrate of the WhatsApp audio conversation had to be through an external device, which is not a primary source and can be easily distorted using technology as has been done by Mr. Ramakrishna", the former judge has said.

He continues to assert that even the English transcription of the audio conversation as contained in the pen drive filed by Mr S. Ramakrishna before the High Court is incorrect, that it has been deliberately distorted to give a false and misleading impression with regard to the conversation. "I have provided a correct transcript of the English translation of the audio tape contained in the pen drive supplied to me", he states.

He has advanced that the conversation as he recalls with the District Munsif Magistrate was threefold: Firstly, he had sought information about the latter's suspension. Secondly, he had consoled and cajoled him for the harassment he had faced. Lastly, he had sought information from him about the Benami transactions regarding the new capital region in the state of Andhra Pradesh, which according to Justice Eswaraiah's information has been the subject matter of a Cabinet Sub-committee which recommended the formation of a SIT and subsequently, the government of Andhra Pradesh wrote to the Union of India for this investigation to be transferred to the CBI since it involved inter-state investigation and several high-ranking influential persons.

"The relatives of a senior sitting Supreme Court judge were involved in these transactions. This was information that I had received and was trying to collect more evidence with regard to it. However, subsequent to my conversation, this has become the subject of FIR, naming the two daughters of the sitting Supreme Court judge and a SLP. I have come in public in various press conferences to expose the misconduct of the Supreme Court judge for his special proximity with the erstwhile government of Andhra Pradesh. This has been stated on record in the SLP as well", submits the petitioner.

He admits that he did seek information and material from Mr Ramakrishna in that phone conversation with regard to Benami transactions involving the CRDA in Andhra Pradesh on the involvement of the relatives of the said Supreme Court judge.

"The allegations of 'conspiracy' and 'plot' are totally false and far from the truth. I have always endeavoured and continue to endeavour to protect and preserve the independence of the judiciary. These allegations are white lies and derogatory and defamatory. I am not part of any such 'conspiracy' or 'plot' and have the highest regard for the institution of the judiciary and all the judges", he asserts.

"This order was made on the basis of the applications for reopening and intervention filed by the suspended District Munsif Magistrate who had recorded the conversation, in an unrelated PIL before the High Court. The PIL was filed by an independent organisation, which has nothing to do with me. Further the order for enquiry into the conversation involving the petitioner was made by the High Court on the basis of the intervention without allowing the impleadment of the petitioner and without notice to the petitioner", it is urged.

It is argued that the impugned order directing an enquiry, into a pen drive purportedly containing a distorted WhatsApp conversation, which is secretly recorded, in a writ petition in which the petitioner is neither party nor was afforded an opportunity of being heard, is against the basic principles of law, apart from being violative of his right to privacy which is held to be a fundamental right protected under Articles 21 and 19(1)(a).

"How can a private conversation be enquired into by the High Court? I fail to see what crime has been committed even if the conversation revolves around some misconduct by the Supreme Court judge and the High Court Chief Justice?...It is not a crime to discuss (an issue) ", Mr Bhushan had pleaded on Monday.