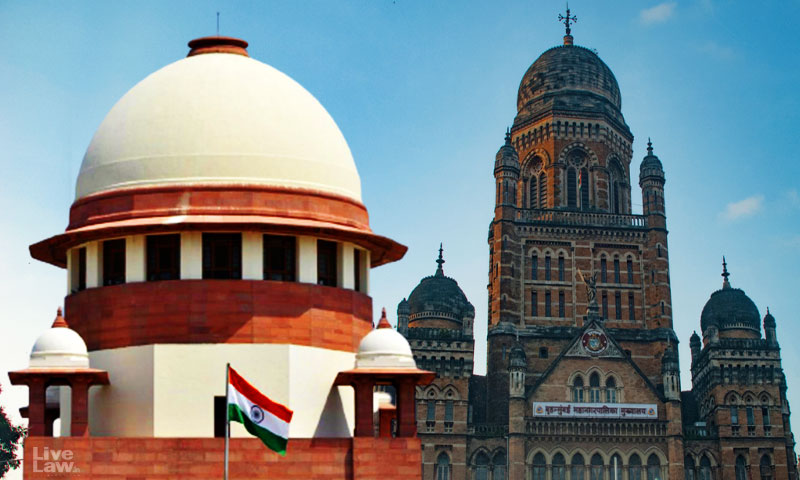 The Supreme Court on Thursday sought the response of the respondents on a petition filed by a BJP leader challenging a Bombay High Court order which dismissed his plea seeking Leader of Opposition (LOP) status at the Municipal Corporation of Greater Mumbai. A Bench headed by Chief Justice of India SA Bobde heard Senior Advocate Mukul Rohatgi, appearing for the Petitioner, who...

The Supreme Court on Thursday sought the response of the respondents on a petition filed by a BJP leader challenging a Bombay High Court order which dismissed his plea seeking Leader of Opposition (LOP) status at the Municipal Corporation of Greater Mumbai.

A Bench headed by Chief Justice of India SA Bobde heard Senior Advocate Mukul Rohatgi, appearing for the Petitioner, who submitted that the LOP status had been given to Congress party, though it was a part of the ruling coalition.

To this, CJI noted, "Opposition leader is part of ruling coalition?"

Accordingly, the Respondents have been directed to file a Counter and the matter was adjourned(Case : Prabhakar Tukaram Shinde v State of Maharashtra).

After the 2017 elections to the Mumbai civic body, BJP emerged had emerged as the second largest party, after Shiv Sena. However, BJP declined the status of Leader of Opposition(as it was in coalition with Shiv Sena then), and therefore, the position went to the Congress party. Three years later, in February 2020, the BJP raised a demand for LoP status, as by then the political equations had changed, resulting in Congress aligning with the Shiv Sena to form the 'Maha Vikas Agadi' coalition to govern Maharashtra after the 2019 assembly polls.

The High Court had refused to accept the BJP leader's plea saying that the Leader of Opposition cannot be changed just because one party had a 'change of heart'.

The instant plea concerns itself with the interpretation of Section 37IA of the Mumbai Municipal Corporation Act, 1888. It raises the question of law as to whether the Mayor, undertaking an exercise to recognise the LOP ought to have appreciated the state of affairs prevailing at a given time and to have consequently taken a decision in consonance with factors appearing in Section 37IA, more particularly, the factor indicating that a decision be taken "for the time-being".

It further raises the question that whether the Mayor ought to have appreciated that nothing prohibits or condemns any change in any one or more of the factors such as "for the time-being" or the "Leader of the Party in opposition" or "having greatest numerical strength" appearing in Section 37IA of the MMC Act, and as such ought to have made his decision in consonance with the same.

The plea then states that the High Court had failed to appreciate that when the Leader of the largest opposition party was willing to take up the responsibility as the LOP, the law did not deny him the same merely because he had initially expressed unwillingness to do so for various considerations.

On 21st September, 2020, the Bombay High Court dismissed  the writ petition filed by BJP Councillor Prabhakar Shinde seeking to be recognized as the Leader of Opposition at the Municipal Corporation of Greater Mumbai.

A Division Bench of Justice SJ Kathawalla and Justice Madhav Jamdar had observed that a mere volte-face or change of heart or decision to increase one's extent of participation whilst in opposition, cannot justify the removal of an incumbent Leader of Opposition who was otherwise duly appointed in accordance with law and as a result of the BJP's express refusal to accept the post in 2017.

A meeting of all the above 82 elected Councillors of the BJP was held on March 3, 2017 where it was unanimously decided that Manoj Kotak would be the Group Leader of the BJP in the MCGM. Then BJP President Ashish Shelar, addressed a letter dated March 3, 2017 to the Divisional Commissioner, Municipal Administration informing him about the said meeting held on that day and about the decision appointing Manoj Kotak as the Group Leader of the BJP in MCGM.

The BJP decided to remain neutral in the MCGM and to play the role of a "Paharekari" i.e. to maintain surveillance. In the General Body Meeting of the MCGM held on March 30, 2017, Ravi Raja from the INC demanded that the post of the Leader of Opposition be given to the BJP, considering that it is the largest Party in Opposition, and in case the BJP declines, then it be given to the INC being the second largest Party in opposition.

This meeting was adjourned by the Mayor in order to seek a legal opinion from the Legal Department of the MCGM in this regard. The Legal Department issued an opinion dated April 7, 2017, wherein it was opined that the post of Leader of Opposition should be offered by the Mayor to the second largest party i.e. the BJP and if the second largest party declines, it be offered to the third largest party i.e. the INC. This legal opinion inter alia took into consideration Section 371A of the Mumbai Municipal Corporation Act, 1888.

Subsequently, after a lapse of almost 3 years from the appointment of Raja Ravi as Leader of Opposition, the new President of the BJP's umbai Unit, Mangal Prabhat Lodha addressed a letter dated February 28, 2020 to the Mayor requesting that the petitioner, Prabhakar Shinde be recognized as the Group Leader of BJP and that he also be appointed as the Leader of Opposition.