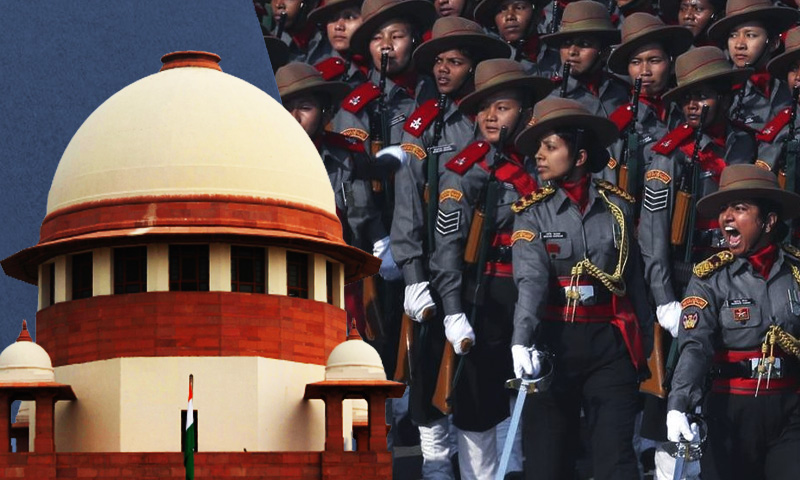 The Supreme Court on Tuesday sought the response of the Union Government regarding the intake of women candidates in National Defence Academy, Rashtriya Indian Military College, Rashtriya Military Schools and Sainik Schools for 2022 admissions.A bench comprising Justice Sanjay Kaul and MM Sundresh issued notice to the Union on an application that pointed out that even for the NDA I -...

The Supreme Court on Tuesday sought the response of the Union Government regarding the intake of women candidates in National Defence Academy, Rashtriya Indian Military College, Rashtriya Military Schools and Sainik Schools for 2022 admissions.

A bench comprising Justice Sanjay Kaul and MM Sundresh issued notice to the Union on an application that pointed out that even for the NDA I - 2022 examination, the intake of women candidates has been limited to 19 for the army, navy and airforce. The applicant contended that though the Union had undertaken before the Court to put in place the infrastructural requirements for women candidates by May 2022, it has limited the number of intake to 19 candidates.

The bench recorded in its order that Senior Advocate Chinmoy Pradip Sharma says that the number of candidates who are to be inducted as per NDA II – 2021 is 208 candidates in the Army including 10 women, 42 candidates in the Navy including three women and 120 candidates in the IAF including six women, and thus, it is proposed that 19 women, subject to completion of all formalities, should be able to join by June 2022.
"The reservation he has expressed is arising from the examination notice dated (...) issued by the UPSC for NDA I - 2022 examination to be held on 10.4.2022. This reservation arises from the fact that the number of women to be inducted is stated to be the same as that proposed to be inducted for NDA II-2021. The submission is that the 2021 II exam happened when some push was given by the court and subsequently, leave was also granted by the court, but it is the own case of the respondents that they expected to make all arrangements by the examination to be held for 2022 – I. It is submitted that the number of women should not be restricted to the same and should be based on the various criteria which is likely to continue for a long time to come, taking into consideration the number of women who can be inducted in different fields as per different judicial pronouncements of this court. Issue Notice. Counsel for the State accepts notice. Reply be filed within 3 weeks. Rejoinder if any within two weeks thereafter", ordered the bench.
"We put to ASG Aishwarya Bhati that she may examine the stand not only qua NDA but also the other admissions of RIMC, RMS and Sainik School", added the bench.
At the outset, the ASG told the bench on Tuesday, "Pursuant to Your Lordships' directions, the process has taken place. Admissions are now underway. In fact, the written (test) is over and the merit list is out but now the process of physical and medical etc- Selection Board- is going on as far as NDA is concerned. Compliance is happening."
Mr. Sharma submitted, "The exam took place on 14 November 2021. We have mentioned in our additional affidavit that 1,76,000 female candidates appeared out of a total of 5,75,856 candidates. Out of that, 8000 candidates qualified for the interview and for the selection board procedure. Out of that, 1000 female candidates have qualified. A corrigendum which was issued pursuant to Your Lordships' directions for the intake states that out of the total number of candidates which are to be taken for NDA II examination of 2021, out of 208 candidates in the army there will be 10 female candidates, in the Navy, out of 42, there will be 3 female candidates, in the air force, there are three different categories- flying, ground duties, and duties (technical/ non-technical), -and out of 92, 2 female candidates, out of 18, 2 female candidates, and out of 10, 2 female candidates respectively...
For the next examination, which is NDA I 2022, UPSC has issued the notification where also they will take in only 19 female candidates which is completely contrary to the stand which they have taken in the affidavit before this court on 20th of September, 2021 where they said that by May, 2022, they will have all the infrastructure ready for full intake of women. The Union of India has to explain this"
Ms. Bhati responded, "I have been instructed to submit for your lordships' consideration that the aspect of intake is not just connected to infrastructure in the academy but also the requirement of forces"
Justice Kaul observed, "We give you leave, there is no difficulty. But the last exam was under a little push and nudge from the court and you were saying that there was a little problem to get the infrastructure ready. So we also said 'let it be' as we wanted the induction to start. But you certainly said that by May you will be fully ready. Having fixed the quantum for this examination which was held in 21, you seem to fix it in the final figure for 2022 also?"
The ASG responded, "If Your Lordships would allow, we can submit a detailed affidavit. It is not just the infrastructural facilities in the academy, but the intake of women officers in the branches which are open to them, how many are coming in through short service commission..."
Justice Kaul noted, "I am not saying that. What you said was that you would be better equipped to deal with it fully, but now you have fixed that as the same. That you have to explain...the earlier exam was an emergency measure. But now what is your programme? How much will be inducted? I assume, Ms. Bhati, this will be in a phased manner?"
"We will place the ratio for Army, Air Force and Navy. Please Give us 2-3 weeks to file an affidavit. For RIMC and RMS, the ratio is much higher", replied the ASG
The bench noted that the ASG seeks to place on record the figures qua the NDA, RIMC and RMS in respect of the last examination- how many people took the examination, how many women were successful.
"Not all fields in these forces will have women induction. Seats have to be fixed depending upon how much women induction has to take place. You cannot have a scenario with equal number of women and men till you have all fields possible open to women. That is not happening as yet. This is a phased manner of progression. When they are doing so, they will explain their stand for the future course of action", Justice Kaul told the advocates for the petitioners/applicants on Tuesday.

It was in August last year that the Court passed an interim order permitting women to appear in the entrance tests for NDA. "Why is co-education a problem?", the bench had then asked the Union Government.

In September, the bench affirmed the order by rejecting an application filed by the Defence Ministry seeking its vacation. The Ministry had sought time till May 2002 to allow women to attend NDA entrance test. The bench said that they should be allowed to appear for the next test due in November. "Having given a hope to women to take exam in November, we don't want to belie that hope", the bench said.,

The Court passed these directions in a writ petition filed by Kush Kalra seeking directions for necessary steps to be taken to allow eligible female candidates to appear for the National Defence Academy and Naval Academy Examination.

The plea has stated that the act of the respondents to categorically exclude eligible and willing female candidates from appearing for the National Defence Academy and Naval Academy Examination over the years, solely on the ground of sex, is a violation of the Fundamental Right of Equality before the Law and Equal Protection of the law.