Bill To Check Trafficking And Rehabilitation of Sex Workers Will Be Placed Before Parliament In The Winter Session: Centre Tells Supreme Court 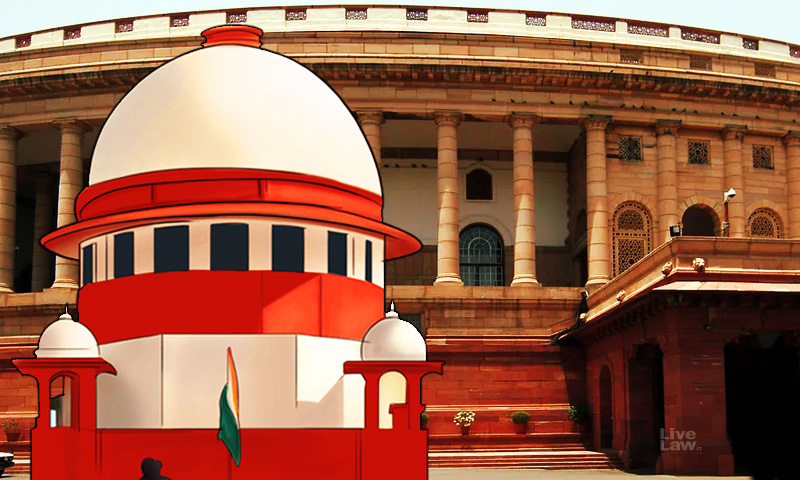 Recording the statement on behalf of the Union of India that a legislation for checking trafficking and rehabilitation of sex workers would be placed before the Parliament in the ongoing winter session, the Supreme Court on Monday required a copy of the final draft of the bill to be shared with Amicus Curiae and Senior Advocate Jayant Bhushan.The bench headed by Justice L. Nageswara Rao...

Recording the statement on behalf of the Union of India that a legislation for checking trafficking and rehabilitation of sex workers would be placed before the Parliament in the ongoing winter session, the Supreme Court on Monday required a copy of the final draft of the bill to be shared with Amicus Curiae and Senior Advocate Jayant Bhushan.

The bench headed by Justice L. Nageswara Rao was hearing the 2010 Budhadev Karmaskar case where, dismissing the appeal of the appellant who was convicted for murdering a sex worker in a red light area in Kolkata by battering her head repeatedly against the wall and the floor of a room, the Court had suo motu converted the case into a PIL by the same order in order to address the problems of sex workers in the country. In 2011, the Court had constituted a panel headed by Mr. Pradip Ghosh, Senior Advocate as the Chairman and including Mr. Jayant Bhushan, Senior Advocate, to assist and advise the Court for giving suitable directions in this matter. The panel was study the following aspects to make suggestions to the Court- (1) Prevention of trafficking, (2) Rehabilitation of sex workers who wish to leave sex work, and (3) Conditions conducive for sex workers to live with dignity in accordance with the provisions of Article 21 of the Constitution.
On Monday, the bench recorded, "This court constituted a committee to submit its recommendations for the rehabilitation of sex workers in 2011. The committee after detailed deliberations with all stakeholders submitted a comprehensive report. We were informed by ASG Pinky Anand, for the Union of India, on February 27, 2020 that a group of ministers has been constituted to examine two draft legislations, and that Report of the Committee appointed by this Court shall be taken into consideration by the Group of Ministers. Recognising the fact that this criminal appeal has been pending since 2010 and realising the immediate need for a legislation to be brought, this court recorded the statement of the ASG that the draft legislation would be placed before the Parliament at the earliest. Today, ASG R. S. Suri submitted that the needful shall be done during the ongoing session of the Parliament. List on December 14."
On Monday, ASG Suri had told the bench, "The bill is to be introduced in the winter session as early as possible, as told to me by ministry; within 2 weeks, I will appraise you as to the progress". The Trafficking of Persons (Prevention, Protection and Rehabilitation) Bill, 2021 is to be introduced in the Parliament in its ongoing winter session.
At ASG Suri's statement, Mr. Bhushan prayed, "To see that they have acted on atleast one of our recommendations, let us have a copy of the final draft bill to see if they are doing anything at all"
"A copy of the draft legislation will be served on the amicus curiae", added the bench in its order.
The bench also noted than on October 28, 2020, a direction was given to the state governments and union territories to ensure distribution of minimum quantity of dry ration to sex workers who had been identified by NACO. The state governments and union territories were direct to take the assistance of the district legal services authorities for identification of genuine sex workers who would be entitled for distribution of dry ration. Pursuant to the direction issued by this court to file affidavits of compliance, some state governments have filed their response.
"Senior advocate Anand Grover, for the applicant, submits that except in the instance of West Bengal and Maharashtra, the directions issued by the court have not been fully complied with. Mr Jayant Bhushan, senior advocate, amicus curiae, submits that the response on behalf of certain state governments shows that ration cards are insisted upon for distribution of dry rations as directed by this court. A few states have brought to the notice of this court that there are no scheme under which radiation can be given for the sex workers", recorded the bench.
"Right to food has been recognised as a human right under Article 21 of the Constitution. Though there is some improvement in the situation caused by Covid pandemic, we are of the view that the constitutional obligation on the state governments and the union territories to provide basic amenities to the citizens of this country takes into its fold that the sex workers are entitled for being provided with dry ration. After hearing all concerned, this court passed an order on October 28, 2020 that it is difficult for sex workers to produce proof of identity. Identification of sex workers by the data provided by NACO and the district legal service authority would be sufficient for them to claim distribution of dry ration. State governments and union territories are directed to comply with the order dated 28. 10. 2020 without insisting on a ration card. A status report shall be filed by the state governments and union territories before December 10. List this matter on December 14", the bench observed.
Case Title: BUDHADEV KARMASKAR v. THE STATE OF WEST BENGAL