"It Will Otherwise Apply Across India": SG Urges SC To Quash HC Order Granting Anticipatory Bail On The Sole Ground Of Apprehension of Death Due To COVID 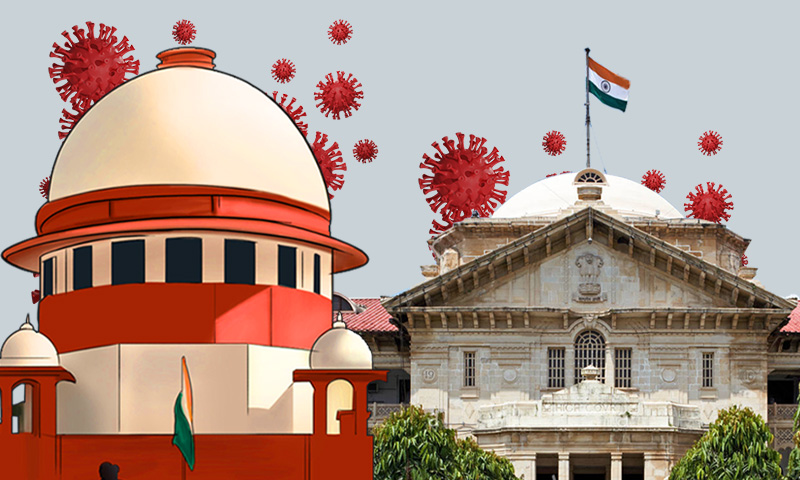 x
The state of UP had moved the Supreme Court challenging the order of the Allahabad High Court to Grant Anticipatory bail on account of the looming danger to life from Covid-19.

SG Tushar Mehta on Tuesday urged the Supreme Court to set aside the order of the Allahabad High Court granting anticipatory bail to an alleged "conman" till January, 2022 on the ground of apprehension of death on account of the COVID pandemic. The bench of Justices Vineet Saran and Dinesh Maheshwari was hearing the SLP by the state of UP against the May order of the Allahabad High...

SG Tushar Mehta on Tuesday urged the Supreme Court to set aside the order of the Allahabad High Court granting anticipatory bail to an alleged "conman" till January, 2022 on the ground of apprehension of death on account of the COVID pandemic.

The bench of Justices Vineet Saran and Dinesh Maheshwari was hearing the SLP by the state of UP against the May order of the Allahabad High Court where the Single Judge, after finding that the apprehension to life in the current scenario is a ground for grant of anticipatory bail to an accused, directed that the applicant before it (an accused under Section 420, 467, 468, 471, 506, 406 of the IPC), in case of his arrest, shall be enlarged on anticipatory bail for the limited period, till January 3, 2022.

On Tuesday, the SG, appearing for the state of UP, prayed that the bench 'set aside the anticipatory bail as it was granted only on the ground of COVID', urging that then the trial court can hear the issue on merits.

"Here, the sole ground on which the anticipatory bail was granted was COVID. That a person may die because of COVID cannot be a ground for bail! This will otherwise apply across the state and pan-India! Whatever COVID-related issues were there, they have been taken up by the Supreme Court for consideration in its suo motu matter and the court has dealt with them. Your Lordships may set aside the anticipatory bail and then the trial court can hear on merits"

Senior Advocate V. Giri, the appointed Amicus Curiae in the matter, also sought to make certain suggestions, but prayed that the bench hear the matter at 2 PM on Tuesday.

The bench then proceeded to adjourn the matter to Thursday.

The state of UP had moved the Supreme Court challenging this order of the Allahabad High Court, with the SG mentioning the matter on May 18 before a vacation bench headed by Justice Saran, submitting that the accused was a "conman" and had been granted anticipatory bail solely on the basis of COVID-19.

On May 25, the Supreme Court had recorded that it has been pointed out by the SG about the larger issue is involved in this matter, as various directions have been issued by the High Court with regard to the grant of bail in the present COVID situation.

The Supreme Court had then directed that as far as the general observations and directions in the impugned order are concerned, the same shall remain stayed and the Courts shall not consider the said directions while considering other application for anticipatory bail, which shall be decided on the merit of each case, and not on the basis of observations made in the impugned order.

Issuing notice on the SLP, the Court had said on May 25 that in case the respondent does not appear on the next date of hearing, it shall be considered to be a good ground for cancellation of anticipatory bail granted to him by the High Court.

"Kindly see the biodata of the accused. The entire judgment proceeds on the basis that COVID is a ground to grant anticipatory bail. The applicant is a serial criminal with more that 130 criminal cases against him", SG had said.

'If he is on bail in 130 cases, why not in the 131st case?', the bench had observed, after commenting that the applicant must be on bail to seek pre-arrest bail in the present case.

The SG had urged again that the High Court's 'sweeping observations' should be stayed which, he said, were being widely cited to seek anticipatory bail in other cases.

Proceedings before the High Court

The impugned order was passed by a Single Bench of Justice Siddharth while hearing an anticipatory bail application of one Prateek Jain, apprehending death due to Covid-19 on account of probable arrest.

The Court stated that the inadequate medical facilities in the State may leave the accused persons unprotected from the threat to their life on account of arrest as against the normal procedure applicable in normal times. It opined that extraordinary times require extraordinary remedies and the law should be interpreted likewise.

Justice Siddharth further observed that the established parameters for grant of anticipatory bail like the nature and gravity of accusation, the criminal antecedent of the applicant, the possibility of fleeing from justice and whether accusation has been made for injuring and humiliating the applicant by getting him arrested have now lost significance on account of present situation in the country and the State on account of spread of second wave of novel corona virus.

The Court opined that if the accused is arrested and subjected to the subsequent procedures of detention in lock-up, production before the Magistrate, grant or rejection of bail or incarceration in jail, etc., the apprehension to his life will certainly arise.

"During the compliance of procedures provided under Cr.P.C. or any special act, an accused will definitely come in contact with number of persons. He will be arrested by police, confined in lock-up, produced before the Magistrate and if his bail application is not granted promptly, he will be sent to jail for an indefinite period till his bail is granted by the Higher Court."

The Court went on to say as follows:

The accused may be suffering from the deadly infections of corona virus, or police personnels, who have arrested him, kept him in lock-up, produced him before the Magistrate and then took him to jail may also be infected persons. Even in jail large number of inmates have been found to be infected. There is no proper testing, treatment and care of the persons confined in jails.

It emphasized that it is only when the accused would be alive that he would be subjected to the normal procedure of law of arrest, bail and trial.