'To Give In To Pressure Groups A Sorry State Of Affairs' : Supreme Court Slams Kerala's Lockdown Relaxations Ahead Of Bakrid 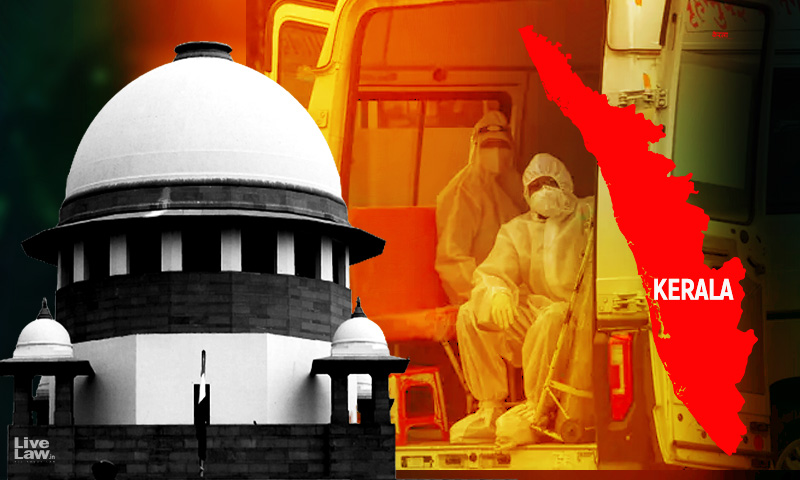 The Supreme Court on Tuesday strongly slammed the decision taken by the State of Kerala to give relaxations in the COVID19 lockdown norms for three days on account of Bakrid.The Court took a highly critical view of the State's decision to allow the opening of all shops in areas marked as Category D- where the COVID infection rates are critical with Test Positivity Rate above 15% -...

The Supreme Court on Tuesday strongly slammed the decision taken by the State of Kerala to give relaxations in the COVID19 lockdown norms  for three days on account of Bakrid.

The Court took a highly critical view of the State's decision to allow the opening of all shops in areas marked as Category D- where the COVID infection rates are critical with Test Positivity Rate above 15%  - to function without any restrictions on July 19.

"The relaxation for one day to Category D areas was wholly uncalled for. In these circumstances, we direct the state of Kerala to give heed to Article 21 of the Constitution read with Article 144 of the Constitution and follow our directions given in the UP case. Also, pressure groups of all kinds, religious or otherwise, cannot in any manner interfere with this most fundamental right of all the citizens of India", the bench headed by Justice Nariman observed.

Since the relaxation was given for yesterday (July 19), the bench did not accept the applicant's prayer to quash the government order which allowed the same. However, the bench warned that if, as a result of this policy of the state, any untoward spread of COVID disease takes place, any member of the public can bring it to the notice of the Supreme Court.

"We may also indicate that if as a result of these policies, any untoward spread of COVID disease takes place, any member of public may bring this to the notice of this court, after which this court may take appropriate action", the bench said.

"To give in to pressure groups so that that the citizenry of India is then laid-bare to a nationwide pandemic discloses a sorry state of affairs", the bench added. The bench noted that in D category, strict restrictions similar to the weekend lockdown was otherwise in place.

"What is extremely alarming is the fact that in category D, where infection rates are above 15%, a full day of relaxation was granted, which was yesterday", the bench said. A category is places with TPR less than 5%, B with 5 % to 10% and C with 10 % to 15%.

A bench comprising Justices RF Nariman and BR Gavai had yesterday asked the Kerala Government to file a reply yesterday itself to an application which challenged the easing of curbs. The bench was hearing an application filed by one PKD Nambiar in the suo motu case taken by the same bench on the decision of Uttar Pradesh Government to allow Kanwar Yatra.

In the reply, the Kerala Government said that the "relaxations were given to provide succor to the traders who were expecting that Bakrid sales will alleviate their misery to a certain extent".

The Government has further stated that even though it took all possible steps to alleviate the miseries of the population of the state, the people have been frustrated by the curbs which have been in vogue for more than three months.

"The traders were expecting that the Bakrid sales will alleviate their misery to a certain extent. They have stocked up the goods for this purpose much early. The organization of traders started to agitate against the stringent curbs implemented in the LSGIs and declared that they will open shops all over the state flouting the regulations", the Kerala Government had said in its reply.

The Court today said that the affidavit of the Kerala Government disclosed a "sorry state of affairs".

"We may only indicate that this affidavit discloses a sorry state of affairs and does not in any real manner safeguard the right to life and health guaranteed to all citizens of India", the bench observed.

The bench observed in its order that the affidavit disclosed that the "state government has given in to associations of traders who represented before the government that they have stocked up goods for Bakrid very early. State also blindly records that opening of shops will strictly follow COVID protocols"

The bench further noted that the government's latest order mentioned the appeal by the Chief Minister that "as far as possible" only persons who have taken at least one dose of vaccination should visit the shops. The bench said that homilies such as "as far as possible" and assurances form traders without anything more do not inspire confidence in the people of India or this court".

Senior Advocate Vikas Singh, appearing for the applicant PKD Nambiar who is challenging the Government decision, submitted that allowing the relaxations when Kerala was having high number of COVID cases was disastrous.

"UP is at 0.02(TPR) and yet they have restrictions. They(Kerala) are at 10% and how can they justify this ? I don't know where this country is going", Singh submitted.

"There is a breakdown of constitutional machinery. The shops are saying that they will open despite directions. Just see the affidavit. These are populist measures", he added.

Senior Advocate Ranjit Kumar, appearing for the State Government, submitted that relaxations to open shops were in place since June 15 based on places categorized as A, B, C and D based on TPR rates. The decision to allow relaxations ahead of Bakrid was taken on the basis of recommendations of the State Disaster Management Authority which has not been challenged by the applicant, he added. He also assured that sufficient safeguards are in place to ensure OVID-appropriate behavior

Title : In Re Alarming News Report About Kanwar Yatra In UP