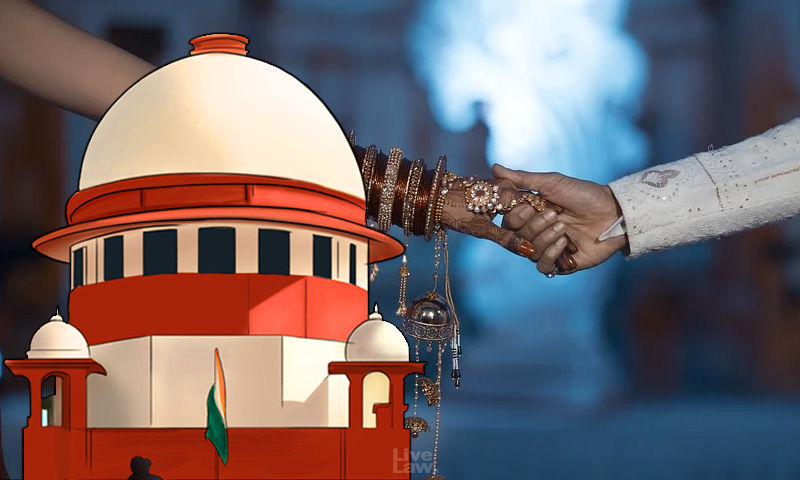 The Supreme Court on Monday refused to entertain a petition challenging certain provisions of the Special Marriage Act, 1954 (SMA) which mandate parties to marriages to publish their private details, open for public scrutiny, before 30 days of the intended marriage.The petition specifically challenged Sections 6(2), 6(3) [Both provisions on notice of intended marriage], 7 [Objection to...

The Supreme Court on Monday refused to entertain a petition challenging certain provisions of the Special Marriage Act, 1954 (SMA) which mandate parties to marriages to publish their private details, open for public scrutiny, before 30 days of the intended marriage.

The petition specifically challenged Sections 6(2), 6(3) [Both provisions on notice of intended marriage], 7 [Objection to marriage] ,8 [Procedure on receipt of objection], 9 [To the extent to which it deals with inquiry under Section 8 of SMA], 10 [Procedure on receipt of objection by Marriage Officer abroad].
During the hearing, Justices Dinesh Maheshwari and Bela M Trivedi queried,
"Challenging the constitutional validity in this petition is abstract. See, you are not an aggrieved person. We are trying to understand, if we take up this constitutional validity at your instance and pronounce on it that it is valid against you, would that bind everybody? Where is the genuine litigant who has got a grievance against these provisions?"
Senior Advocate Ravi Shankar Jandhyala appearing for the petitioner submitted that the latter had married a person from another religion under the SMA.
"Then it ceases to be a PIL", the Bench said. "If it is your personal cause, it ceases to be a PIL."
Reiterating its earlier query, the Bench proceeded,
"We hope we are clear in our question, supposing we take up this challenge to these provisions in abstract at your instance and pronounce against you, would that bind everybody, including a person who may have a genuine grievance to raise?"
Owing to this, the bench went ahead to dismiss the plea.
The petition challenged the aforesaid provisions of the SMA as it is violative of the fundamental rights of the citizens under Articles 14, 15 and 21 of the Constitution of India.
The petition stated that said provisions allow other persons to object to a marriage and empower the Marriage Officer to look into the same.
"The impugned provisions require the parties to the marriage to publish their private details, open for public scrutiny, before 30 days of intended marriage. The provisions also allow anyone to submit objections to the marriage and empower the Marriage Officer to inquire into such objections."
This requirement of notice before marriage is absent in the Hindu Marriage Act, 1955 and customary laws in Islam provision, the petition pointed out while adding that the SMA provisions are discriminatory and violative of Article 14 of the Constitution of India.
Further, the petition argued that the said provisions violate the fundamental rights of couple intending to marry, depriving of their right to privacy under Article 21 of the Constitution of India.
Further, the plea contended,
"There is no legitimate state interest which is being protected by publication of the personal and intimate details of the parties to the marriage. It is settled that under proportionality test, the court would determine whether "the means adopted to achieve the end sought do so by impairing as little as possible the right or freedom in question"."
The petition sought to commiserate the marriage laws to one that is more in tune with just decisional autonomy of two individuals and less to do with social sanction of their marriage.
The petition was filed through Advocate on Record Sriram Parakkat, assisted by Advocate Anupama Subramaniam.
Case Title: Athira R Menon vs Union of India|WP (C) No. 169/2021 PIL W