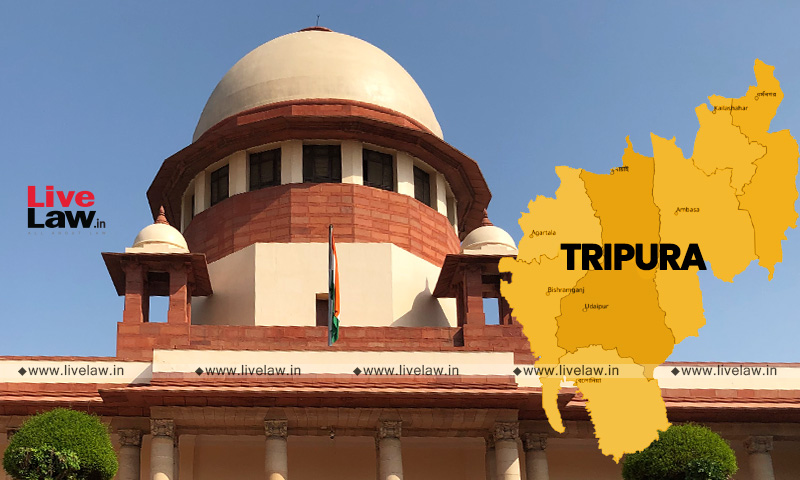 The Supreme Court on Tuesday has called upon the state of Tripura to submit by 12:45 PM a statement, signed by the DGP and the Home Secretary, detailing the security arrangements put in place for the municipal elections scheduled on November 25, from today which is the last day of campaigning to the polling day, to the counting day, to the declaration of results and the...

The Supreme Court on Tuesday has called upon the state of Tripura to submit by 12:45 PM a statement, signed by the DGP and the Home Secretary, detailing the security arrangements put in place for the municipal elections scheduled on November 25, from today which is the last day of campaigning to the polling day, to the counting day, to the declaration of results and the post-poll security.

Addressing Senior Advocate Mahesh Jethmalani, for the state, Justice Chandrachud observed, "We will keep this matter at 12:45. We will give you an hour and a half. We want you to take very detailed instructions from the DGP and the Home Secretary about the specific arrangements which have been made, who is in charge of security, what specific arrangements are being made today and then tomorrow for the security of the polling booth, other staff, etc, the arrangements for the polling day, the safety right up to the declaration of results, the post-poll security. We would like you to do two things-prepare this and share it on the email with the Court Master. Then you share it with us on the screen at 12:45 so that the counsel for the petitioners also have the benefit of seeing it on the screen. Then we will see what has to be done thereafter. But we would like you to make a statement and share it on the screen so that we can make it a part of the order as to what steps you are taking for Today's campaigning, the pre-poll process and the poll process leading to the counting and declaration of votes. Take detailed instructions from the DGP and the Home Secretary and let it be signed and scanned and sent to you."
"Show us what steps you are taking to ensure free and fair elections between today till the declaration of the results? What steps are you going to take and what steps have been taken so far?", asked Justice Chandrachud.
The judge also asked about the presence of the central paramilitary forces in the state, noting that one segment of the Central armed paramilitary forces can be deputed in those areas which are critical areas.
A bench comprising Justices DY Chandrachud and Vikram Nath was hearing a contempt petition filed by All India Trinamool Congress and its Rajya Sabha MP Sushmita Dev alleging non-compliance on the part of Tripura authorities of the order passed by the Supreme Court on November 11 to ensure free and safe atmosphere for political campaigning for the local body elections scheduled on November 25.
The AITC, on Tuesday, suggested that in view of the law and order situation, the election may be postponed. Justice Chandrachud expressly told Mr. Jethmalani to not respond to this submission as of now.
In the wake of security concerns amid the upcoming Tripura elections, the Supreme Court on Monday agreed to hear on Tuesday a contempt petition at the behest of All India Trinamool Congress.
On November 11, the Court had directed on a petition filed by the All India Trinamool Congress that it is the responsibility of the Tripura police authorities to ensure that no political party is prevented from exercising their rights in accordance with law for political campaigning in a peaceful manner.
On Monday, Advocate Amar Dave made a mention before a bench headed by Justice D. Y. Chandrachud, "We had earlier filed a writ petition in connection with the Tripura elections. Your Lordships had passed directions for the arrangement of security. But the situation is worsening. Yesterday also incidents have happened. And they are taking place across the board now. In view of what has transpired, we have filed a fresh contempt petition, and we are also seeking directions from Your Lordships. Please let it be heard urgently"
When Justice Chandrachud noted that the elections are scheduled for November 25, the advocate urged, "The situation is very volatile. It requires the Court's considerations. Every day, these incidents are happening, and they are increasing"
Justice Chandrachud agreed to hear the matter tomorrow.
On November 11, another bench headed by Justice Chandrachud stated in the order, "We expect that necessary arrangements will be made by the Government & the DGP along with law enforcement machinery of the state".

"We are of the view that since the election process has commenced, it is the responsibility of the respondents to ensure that no political party is prevented from pursuing its rights in accordance with law for political campaigning in a peaceful manner", the order stated.

The bench passed an ad-interim order directing the Tripura police authorities to consider the nature of threats that has been averred in the petition so that appropriate arrangements are made to ensure maintenance of law and order.

With regards to plea for individual security, the concerned Superintendents of Police shall take decision having regard to threat perception with regards to each case and area and take appropriate action with respect to security as required.

The Court also called for an affidavit by the Home Secretary of Tripura explaining the steps taken in pursuance to the present order to ensure that elections in Tripura shall remain free and fair. The Court directed the DGP and the Home Secretary to file joint report of compliance. The matter will be heard after two weeks.

Senior Advocate Gopal Sankaranarayanan represented the petitioners. There was no appearance for the State of Tripura. The petitioners' counsel told the bench that copy was served on the Tripura government counsel.

The Court noted in the order that the petitioners have tabulated in synopsis incidents of violence which have allegedly taken place against them. The petition adverted to an incident of violence which took place on October 22, 2021 when a team of AITC leaders and workers were in midst of public contact proceedings. Though FIR was registered, no arrests have been made, the petitioners stated.

As consequence it was submitted that though the election process has commenced, the Trinamool Congress members have been prevented from the right of electoral campaign as a result of actual and threatened violence.

The Court also took note of a document produced by the petitioners which declined them permission to hold a meeting at Agartala city.