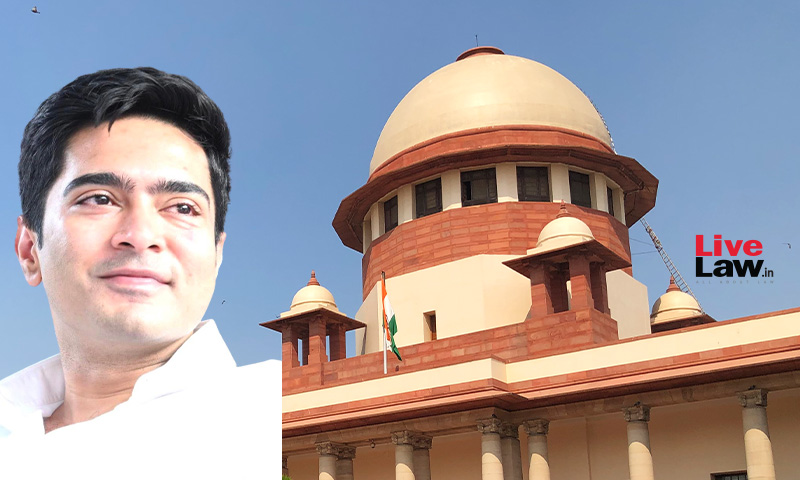 The Supreme Court, on Tuesday, stayed the effect and operation of the order of the Delhi High Court order refusing to quash summons issued to Trinamool Congress MP Abhishek Banerjee, the nephew of West Bengal Chief Minister Mamata Banerjee and his wife Rujira Naroola Banerjee for appearance in New Delhi for interrogation in connection to coal scam case. While issuing notice in the plea and staying the operation of the impugned order in the interim, a Bench comprising Justices U.U. Lalit, S. Ravindra Bhat and Sudhanshu Dhulia imposed the following conditions -

In no unclear terms, the bench cautioned the State of West Bengal that it would not tolerate any infraction, obstruction in the process of interrogation by the concerned officers.

"In case of any obstruction or interference, the Directorate shall be at liberty to approach the vacation bench of this court for appropriate directions.

Mr. Suhaan Mukherjee, the Standing Counsel appearing for WB) has also assured us that in case any complaints is or is likely to be filed for the official involved in interrogation, no coercive action of any kind will be initiated by police or any state machinery against such officials without taking leave of the Court. The state shall also be at liberty to approach the vacation court", the bench recorded in the order.

The prosecution under Section 174 IPC for non-appearance was also stayed by the Bench for the time being.

Considering similar issues are pending consideration in the Nalini Chidambaram's matter, the Bench directed the Registry to list the papers of the present matter before the CJI. NV Ramana so that it can be placed before the appropriate Bench.

"Issuing notice returnable on 19.07.2022. Mr. M.K. Maroria accepts notice on behalf of the Respondent Directorate. He is granted 3 weeks time to file an affidavit in response and also place on record all those documents on which reliance would be placed by the Directorate. Rejoinder if any be filed within 2 weeks thereafter.

Since similar issues in the matter are pending consideration in Nalini Chidambaran v. UOI we direct the registry to place papers before CJI so that both matters can be placed before the appropriate bench. As an interim order was passed in Nalini Chidambaram's matter we proceed to pass the following directions."

On the last date of hearing, the Bench suggested that instead of summoning them to Delhi, ED can question Banerjees at Kolkata. The Bench assured that it would direct Kolkata Police to provide all assistance and will hold the West Bengal Government accountable if such assistance was not forthcoming. Additional Solicitor General SV Raju, appearing for the ED expressed apprehension. He submitted that on previous occasions, CBI office have been gheraoed in Kolkata, officers have been hounded. THe ASG also referred to Abhishek Banerjee's influence in the State of West Bengal.

Again, on Tuesday, Mr. Raju vehemently opposed the suggestion to permit the petitioners to be examined in Kolkata.

Justice Lalit stated that if the ED is suggesting that the Banerjees are accused, they can be, undoubtedly, directed to appear before the Directorate's office in Delhi. But in the present case, ED is yet to declare them as accused.

Mr. Raju suggested that he would place on record a note pointing out the difficulties in carrying out the examination/interrogation in Kolkata

Justice Lalit enquired, if his apprehension was limited to the non-cooperation of the State machineries. He reassured, if so, the Bench will ensure that the State Police and other apparatus of the State provide assistance as and when required by the Directorate.

"If instead of WB if it had been some other State would that have been possible. If assistance is not coming from State machinery, then we will ensure that. Need not go into what has happened in the past, let's chalk out a mechanism for the future."

"In a case like this, the offence has taken place in the territory of Delhi, investigation is in Delhi, his address is in Delhi, he is very influential - related to the highest machinery to the State."

"According to us he is a potential accused. We have a good case to interrogate him. So far as the husband is concerned he has been to Delhi two times."

"Was he present twice in the interrogation in Delhi?"

The Bench was apprised that he had participated under protest.

As the Bench indicated that it would make a distinction and grant all protection to the lady but given Abhishek Banerjee had already appeared twice, he might be asked to appear at the Directorate's office in Delhi, Mr. Sibal referred to Section 65 of PMLA which states that until and unless inconsistent the provisions of CrPC would be applicable to arrest, search and seizure, attachment, confiscation, investigation, prosecution and all other proceedings under PMLA Act.

Thereafter, reliance was placed on Sections 160 and 161 CrPC. He argued -

"It has to be in jurisdiction, in case he is taken out, consent is to be obtained. The point I am making is I am not running away from investigation."

Mr. Raju refers to the judgment in State Rep. By Inspector Of Police v. N.M.T. Joy Immaculate as under -

"Section 160 of the Code of Criminal Procedure deals with police officer's power to require attendance of witnesses. This Section aims at securing the attendance of persons who would supply the necessary information in respect of the commission of an offence and would be examined as witnesses in the inquiry or trial therefore. This Section applies only to the cases of persons who appear to be acquainted with the circumstances of the case, i.e. the witnesses or possible witnesses only. An order under this Section cannot be made requiring the attendance of an accused person with a view to his answering the charge made against him. The intention of the legislature seems to have been only to provide a facility for obtaining evidence and not for procuring the attendance of the accused, who may be arrested at any time, if necessary. In other words, this Section has reference to the persons to be examined as witnesses in the trial or inquiry to be held after the completion of the investigation. As an accused cannot be examined as a witness either for or against himself, he cannot be included in the class of persons referred to in the Section. But the police officers are fully authorised to require the personal attendance of the suspects during the investigation.

In the instant case, the High Court, by an impugned order has given a direction to the State Government to issue circulars to all the police stations instructing the police officials that the woman accused/witness should not be summoned or required to attend at any police station under Section 160 Cr.P.C. but they must be enquired only by women police or in the presence of a women police, at the places where they reside. The High Court has issued a further direction to the Government to ensure that this instruction is strictly followed by the police in future.

Justice Lalit was concerned that the reliance on the above-mentioned judgment might not be relevant as the majority opinion did not consider the issue. He stated -

"The majority is silent on this issue. We cannot go with the additional reason given by the third judge who concurred."

The Bench was inclined to grant interim stay and in the meanwhile permit interrogation/examination to be conducted in Kolkata.

Mr. Raju in his attempt to persuade the Bench not to pass such an order, submitted that there was suppression of the fact that Abhishek Banerjee has an address in Delhi and on the said ground the petition is to be rejected. He submitted -

"On documents they have suppressed. They have annexed the reply without a footnote. This is material suppression. Kindly see the original letter, there is Delhi address. On that account the petition is to be rejected."

The CBI had registered an FIR in respect to offences of illegal mining and theft of coal from the leasehold areas of Eastern Coalfields Ltd committed in the state of West Bengal by certain individuals. Pursuantly, ED has registered an ECIR in the Head Investigative Unit located in New Delhi.

As per the impugned order the Banerjees shall be governed by Section 50 of the PMLA and not Section 160 CrPC. Unlike the said CrPC provision, Section 50 does not provide for witnesses being examined in their local area. As per the plea, the substantial question herein is whether the ED can assume a pan-India jurisdiction, to summon any person, without indicating to such person as to whether they are being summoned as an accused/ suspect or as a witness, at any place of their choice, under the purported garb of Section 50 of the PMLA, in utter derogation of the Fundamental Rights of the witness/accused persons, salutary principles of fairplay and expeditious investigation, and the extant provisions of the CrPC and the PMLA." the petition states.

According to the petitioner, the impugned order fails to appreciate that powers under Section 50 PMLA have to be exercised in conjunction with Section 160 CrPC and not in derogation thereof. Further it has been submitted that the manner in which interrogation is to be conducted would follow the prescription in Section 160 CrPc in terms of Section 65 PMLA Act. According to petitioners, the provisions of PMLA or even CrPC does not contain any enabling provision for the investigation to be conducted at the "Headquarters" of the Investigating Authority, de hors the cause of action. Moreover, being the National General Secretary of the All-India Trinamool Congress Party which is one of the principal opposition parties to the political party in power at the Centre, the petition alleges, gives justifiable cause to "target" and "fix" Banerjee by misusing the Directorate.