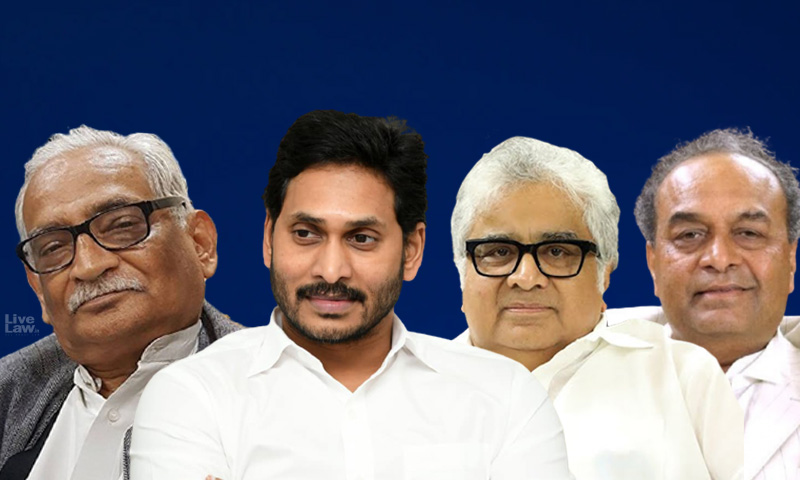 The Supreme Court on Wednesday stayed the Andhra Pradesh High Court's gag order on media reporting and social media comments on the contents of the Amaravati land scam FIR.

A bench comprising Justices Ashok Bhushan, R Subhash Reddy and M R Shah passed the stay order on a special leave petition filed by the State of Andhra Pradesh challenging the interim order passed by the High Court on September 15.

The top court has listed the matter for hearing in January 2021 and has directed the parties to file their counter affidavits in the meantime. The Court has also requested the High Court not to decide the writ petition in the meanwhile.

However, the Supreme Court has not interfered with the stay order passed by the High Court on the investigation into the FIR registered for Amaravati land scam. In the High Court, a bench of Chief Justice J K Maheshwari passed the interim order in a writ petition filed by the former Advocate General of AP, Dammalapatti Srinivas.

The impugned order stayed the investigation and restrained any media reporting and social media comments as to the FIR registered by the Anti-Corruption Bureau alleging corruption and illegal land transactions in relation to the shift of the capital to Amravati following the bifurcation of the erstwhile state of Andhra Pradesh in 2014.
The gag order of the HC said :

"It is further directed that the news in regard to registration of FIR or in the context of the said FIR shall not be made public in any electronic, print or social media. The Secretary, Home Department, Govt. of A.P., the Director General of Police, A.P., shall inform through the Information and Public Relations Department, Govt. of A.P., to the effect that no electronic or print news item be published with respect to the FIR No.08/RCO-ACB-GNT/2020 of ACB, Guntur, dated 15.09.2020 and connected events until further orders of this Court. Social media posts shall also not be published and, in this regard, the Director General of Police, A.P., and the Ministry of Information and Broadcasting, Govt. of India, shall take steps to inform the relevant social media platforms/houses in this regard".

The allegation in the FIR was that even before the new capital at Amaravati was announced in 2015, there was mass land pool sharing during the period of 6 months before by benamidars of people involved.

Senior Advocate Rajeev Dhavan appearing for the State of Andhra Pradesh argued that the stay on investigation by the High Court was unwarranted inasmuch as the writ petition before it was essentially a petition for anticipatory bail and to stop media reporting on the Amaravati land scam FIR.

He pointed out that the said FIR named 13 persons whereas the writ petition in the High Court was only confined to the former AG. It was thus contended that the High Court had gone "beyond the reliefs sought for".

"The SIT probe was not a knee-jerk reaction. There were reports of sub-committee of cabinet on the land scam. A letter was sent to Union seeking CBI inquiry.

The writ petition was filed a few days after inquiry was ordered. It was decided on the same day it was filed…One judge had recused from hearing and the Chief Justice sets himself the bench at 5.30 on that day to pass the order," he submitted.

He referred to the documents relating to the FIR and wondered why would farmers sell their lands during the period June - December in 2014? He further referred to the comparative charts of land values and the land transactions of accused persons. "Should such a case not be investigated? Was the High Court right to stay this investigation on the same day of the filing of the writ petition?", he then asked.

He further argued that the writ petition before the High Court merely made rhetorical statements and there was no specific pleading on facts. He stated that except for using terms like 'gestapo police', 'utter disregard of constitution' etc. against the govt, there was no substance in the petition.

"Would your lordships have stayed an FIR on the basis of allegations like 'nazi' 'gestapo' etc?" he asked the Top Court.

Dhavan proceeded to make submissions against the gag order and contended that the same goes against the settled principles of the Sahara judgment. In Sahara v. Sebi, the Supreme Court had made it clear that injunctions to uphold a free trial by curbing the freedom of the press could only be given "in cases of real and substantial risk of prejudice".

In this backdrop Dhavan said, "Is there something extraordinarily special about this petition that such orders had to be passed?"

Submissions on behalf of former AG

Responding to Dhavan's arguments, Senior Advocate Mukul Rohatgi for the former AG informed the Court that when the writ petition was filed, FIR was not registered.

"A judge recused from hearing. Then FIR was registered. The matter was mentioned before the CJ urgently and hearing was done," he said.

He alleged that the Government had leaked out the FIR to the media in an attempt to malign the former AG's reputation and hence, the matter was heard urgently.

"The entire petition reeks of malafides. I requested the Chief Justice to hear the petition on the same day. It is easy to mar someone's reputation than build one. If lawyers are to be targeted for being Advocate General is not done," he said.

On the allegations of discreetly purchasing lands from farmers just before shifting of the capital, Rohtagi said,

"It is absurd to say that there was secret knowledge of capital. How can the shifting of capital be secret?. For example, when an airport is proposed at a place, people know about it."

Senior Advocate Harish Salve, also appearing for Srinivas, referred to 'Ee Nadu' reports of July 2014 to state that the proposal to set up capital at Amaravati was known to public.

Salve further said that if the Government was aggrieved by the High Court's order, it should have moved an application for vacation of the order, instead of approaching the Apex Court.

"The SLP is a vote of no confidence against the HC. If the order was so wrong they should urge the HC to vacate the order. The CM is now making allegations against Chief Justice.

They are getting surrogates to file applications in HC against the stay order. A lady lawyer has filed an application against the Sep 15 order. Please see what are they up to," he said while urging that the High Court, being aware of the local conditions, be permitted to hear the case after the government files its reply.

"This is not a case where your lordships should encourage the State Government which says they don't have (confidence) in the High Court," he added.

Dhavan clarified that he has nothing against the High Court. "I have no doubt that on Sept 15 forensic powers were used and the case was heard in the evening," he said.

He then pointed out that the Respondents had not made any submission on the commission of crime.

"The central question here is if an offence to be investigated? Is there immunity from prosecution just because one is a lawyer or was an Advocate General?" he remarked rhetorically. He referred to certain precedents to state that issue of malafide loses relevance if the complaint has substance.

Further, responding to Salve's submissions on why the Government had not approached the High Court, Dhavan said,

"Why send it back to the HC when it has passed a draconian order to stay investigation and to stop media? Why? For review?

Is there an offence? The materials disclose offence. Was it a knee jerk reaction? No. CBI inquiry was also sought.

He submitted that the Police had not even commenced investigation in the matter and it is only in extraordinary circumstances that investigation can be stayed.