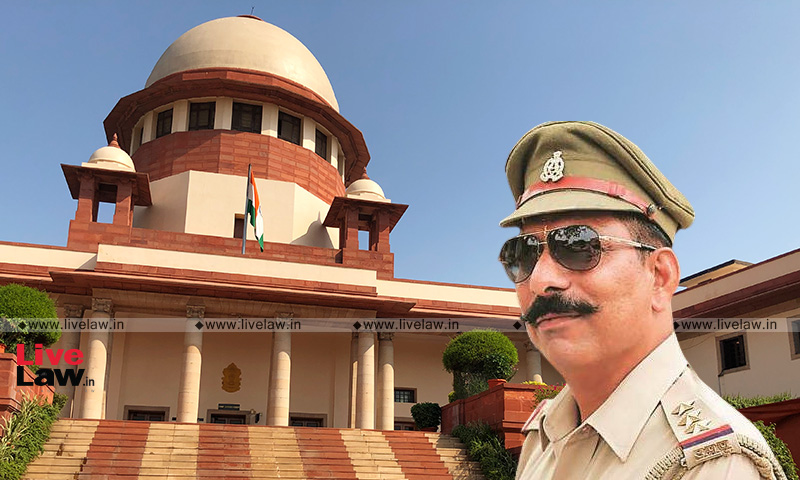 On Monday, the Supreme Court stayed the order of the Allahabad High Court granting bail to one of the main accused, Yogesh Raj, in the Bulandshahr mob violence case- which claimed the life of police inspector Subodh Kumar Singh. The Court directed Yogesh Raj him to surrender within a period of seven days. Upon hearing all the parties, considering the seriousness of the offence, the...

On Monday, the Supreme Court stayed the order of the Allahabad High Court granting bail to one of the main accused, Yogesh Raj, in the Bulandshahr mob violence case- which claimed the life of police inspector Subodh Kumar Singh. The Court directed Yogesh Raj him to surrender within a period of seven days.

Upon hearing all the parties, considering the seriousness of the offence, the Bench stayed his bail and asked Yogesh Raj to surrender within a period of 7 days.

"We have heard learned Counsel for parties at some length. It appears that the charges have not been framed. There is no question of even examining the independent witnesses…The matter is quite serious where under the pretext of cow slaughter, a police officer has been lynched. Prima facie, it is a case of taking law into their own hands. We are thus of the view that Yogesh Raj be asked to surrender within a period of 7 days from today. To that extent the impugned orders granting him bail are stayed."

"We call for a report from the Trial Court as to how much time do they need to frame charges then to record the testimony of the independent witnesses."
Courtroom exchange
A bench comprising Justices Sanjay Kishan Kaul and M.M. Sundresh was hearing the petitions filed by Rajni Singh, the wife of the deceased police officer, Inspector Subodh Kumar Singh. The deceased officer had gone to the crime scene to maintain law and order and eventually lost his life to a violent mob, protesting the slaughtering of a cow. The Petitioner assailed the order of the Allahabad High Court which had granted bail to Yogesh Raj, one of the main accused and a powerful local leader of Bajrang Dal. Along with the said petition, the Bench was also hearing the petition filed by a co-accused whose bail was rejected by the High Court.

Senior Advocate Sanjay Hegde appearing on behalf of the Petitioner, Rajni Singh, apprised the Court about the criminal antecedents of Yogesh Raj, who had filed an affidavit before the Supreme Court to vouch that no bail condition had been flouted by him.

"In the first matter Yogesh Raj who was the leader of the mob filed an affidavit saying that your lordships should not cancel bail, that he has not violated any of the conditions of the bail. To which I have filed a rejoinder pointing out he contested elections when he threatened to murder somebody who had not voted for him."

Referring to his rejoinder, Mr. Hegde pointed out that an FIR had been lodged against Yogesh after he was released on bail for committing offence punishable under Section 147, 148, 308, 352, 504, 506 of the IPC. As per the FIR he along with his men, attempted to kill a family for not casting vote in his favour in the Panchayat elections.

Mr. Hedge emphasised that though the incident of lynching had taken place almost 3 years ago, charges have not yet been framed in the teeth of the guidelines laid down by the Supreme Court in Tehseen Poonawalla v. Union of India.

"Since, more than 3 years have passed since the incident, however charges are yet to be framed because of his influence. I have also enclosed the guidelines in Tehseen Poonawalla which cover incidents like this which call for speedy trials in the dedicated courts. The pandemic may have come in between."

Putting forth his main argument, Mr. Hegde submitted that the right of personal liberty accorded to all by the Constitution is neither unfettered nor unbridled.The right must necessarily be placed and tested in the balance alongside larger societal needs of peace and orderly conduct.

Advocate-on-Record, Mr. Rohit Amit Sthalekar, appearing for another accused (Lokendra) who had not been granted bail by the Allahabad High Court, at the outset submitted that on a perusal of the chargesheet it would be clear that the argument for criminal antecedent does not hold true for him. He further contended that Lokendra is a person with disability and he had been incriminated only on the statement of two witnesses who have alleged that there is video footage of him running with the mob. It was emphasised that he is not named in the FIR and there were no allegations of murder against him. Moreover, the video footing showing him run with the mob had also not been filed.

"First and foremost the allegations of criminal antecedents do not stand against me. Even in the chargesheet it has been categorically mentioned that I have no criminal antecedent. Second important fact is that I am 40% paralysed. I have polio by birth. Now, my incrimination has come only on the basis of video footage which has been allegedly stated in the statements of only two witnesses that I have been running in the mob. And the allegation is not of killing the police officer, but that I was a part of the mob and one person Prashant Nath actually fired the gun after snatching it from the police officer. There is no allegation of killing against me. The allegation is also that I was shouting 'Maaro, maaro". The FIR does not name me, it is on the basis of CCTV footage. Any video footage showing me has not been filed. Possession of CCTV footage has not been recovered from my possession."

"It is a case of mob violence, over the alleged incident of cow slaughter."

Assailing the decision of the High Court to not grant bail, Mr. Sthalekar informed the Court that the only reason for rejection of bail are the statements of the two witnesses, which are categorically inconsistent.

"The only fact today is that my bail has been rejected on the basis of statement of two witnesses. Those two witnesses, one is the complainant. The complainant categorically does not mention this incident in the FIR. The second police officer whose statement has been recorded, in that statement he has not even seen, not an eye-witness to the incident. In the second statement he says…There is categorical inconsistency. That apart there are new evidence that have been filed. These two people have not given any video footage where I was seen."

He further submitted that every other accused in the matter has been released on bail, while he had been behind the bars for the past three years.

The Bench informed Mr. Sthalekar, that the Petitioner had filed a petition to not only seek sustenance of his client's incarceration but also to seek cancellation of the bail orders for the other accused.

"There are two other petitions that have come before us where bail has been granted. Now, effectively that this bail should be cancelled and the order passed in your case of continued incarceration be sustained, that is the effect."

"Categorical assertion has to be made by the State. They have not done so."

Mr. Hegde pointed out that the State had filed a Counter Affidavit saying that the bail ought to be cancelled.

Mr. Sthalekar argued that the charges have not been framed and the trial has not yet begun. Under such circumstances rejection of bail would indicate that his client would be in jail forever.

"The other important factor is that this is not a matter of trial. There are 128 witnesses, the charges have not yet been filed. The trail has not yet begun. By that logic I'll be in jail forever. I have already been in jail for the last 3 years."

"In the Counter Affidavit, they say charges have been filed. We will ask the Counsel for the State what steps they have taken to include these sections."

The Additional Advocate General, Mr. Ajay Kumar Mishra, appearing for the State of U.P. submitted that -

Rephrasing the query, the Bench asked -

"What we are asking is this, that if you say that the bail has to be cancelled, why did you not file a SLP…You say that certain charges….has not been included while taking cognisance. What did you do?"

It was pointed out by Mr. Mishra that the complainant had filed the SLP within a month of the impugned orders. In light of the same the State had only filed the Counter affidavit supporting her case.

Critical of the inaction of the State, the Court remarked-

"It is very surprising that a complainant could follow the track of the case by filing SLP against granting of bail and you being a party who has opposed the bail application is saying that you want to take umbrage under the SLP filed by the complainant. Why have you not taken any steps. For the first time you are saying that S.34 has not been added."

The Bench noted that the charges framed do not reflect Section 34, which would have serious consequences in a case of mob violence.

"As per our instruction, charges of S 302 has been framed against three persons, in which Lokendra is already there. Our instructions are that Lokendra, Prashant, Rahul they all are still in jail and charges have been framed. There are about 44 accused persons…So far as Rajni's matter is considered in this case, Yogesh Raj is S. 302 and 34 has not been put in the chargesheet."

Mr. Hegde informed the Court that only chargesheet has been submitted and charges are yet to be framed by the Trial Court.

Advocate, Mr. Pashupati Nath Razdan, appearing on behalf of Yogesh Raj informed the Bench that there is no specific allegation of lynching against him and he was merely protesting the cow slaughtering.

"As far as Respondent no. 2 is concerned there is no specific allegation against me of lynching the deceased inspector. My whole role was that I was protesting for only the cow slaughtering alone. It is not their case also."

"That is exactly what they are saying in the Counter Affidavit…That is their stand now."