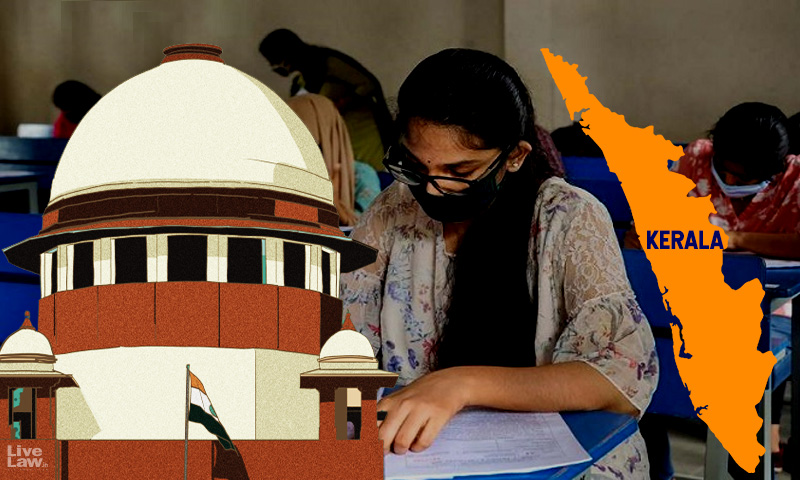 The Supreme Court on Friday stayed the decision of the Kerala Government to conduct offline exams for Class XI (Plus One) from September 6 amid the rising cases of COVID.A bench comprising Justices AM Khanwilkar, Hrishikesh Roy and CT Ravikumar noted that COVID cases are continuing to rise in Kerala, with over 30,000 cases being reported daily, which accounts for nearly 70% of the...

The Supreme Court on Friday stayed the decision of the Kerala Government to conduct offline exams for Class XI (Plus One) from September 6 amid the rising cases of COVID.

A bench comprising Justices AM Khanwilkar, Hrishikesh Roy and CT Ravikumar noted that COVID cases are continuing to rise in Kerala, with over 30,000 cases being reported daily, which accounts for nearly 70% of the national cases.

The bench wondered if the Kerala Government has taken into account this fact while deciding to conduct offline exams.

"Prima facie we find force in submission made by petitioner that the state government has not seriously considered the prevailing situation before having physical exam proposed to be conducted in September this year. As we couldn't get satisfactory response from counsel for state in this regard, we grant interim relief staying offline exam for till next date of hearing. List this matter on 13 September", the bench noted in the order.

The bench passed the order in a special leave petition filed by one Rasoolshan A, represented by Advocate Prashant Padmanabhan, challenging a decision of the Kerala High Court refusing to interfere with the decision to hold offline exams.

"There is alarming situation in Kerala. It accounts for more than 70% cases of the country, with around 30,000 daily cases. Children of tender age can't be exposed to risk", Justice Khanwilkar orally observed.

Advocate Padmanabhan argued that the holding of physical exams when the COVID cases are at its peak was a huge risk, especially so since the children are not vaccinated. He stressed that around 3 lakh students will take the exam scheduled to be held from September 6 to 27.  He referred to the critical observations made by a bench led by Justice RF Nariman in July against the Kerala Government when it gave relaxations in the COVID restrictions amid the Bakrid festival.

However, the bench asked him if the State Government has taken note of the change in circumstances after April. The bench expressed grave concern at the rising COVID cases in the State.

"I have been the Chief Justice of Kerala, and I can say that Kerala has one of the best medical infrastructures in the country. Despite that, Kerala has not been able to contain the COVID cases", Justice Hrishikesh Roy commented.

Justice CT Ravikumar, newly sworn-in judge from Kerala, remarked that to allow students from different parts of the state to mix together in exam centres can result into a "super-spread" of COVID.

"Assure us that no student will be infected. These are children of tender age. Even one case reported for a student, we will hold you accountable", Justice Khanwilkar told the state's counsel.

"I cannot give that assurance", the state's counsel replied.

The bench then proceeded to pass the interim order. It said that the State Government may think of alternate forms of assessment and inform it on the next date.