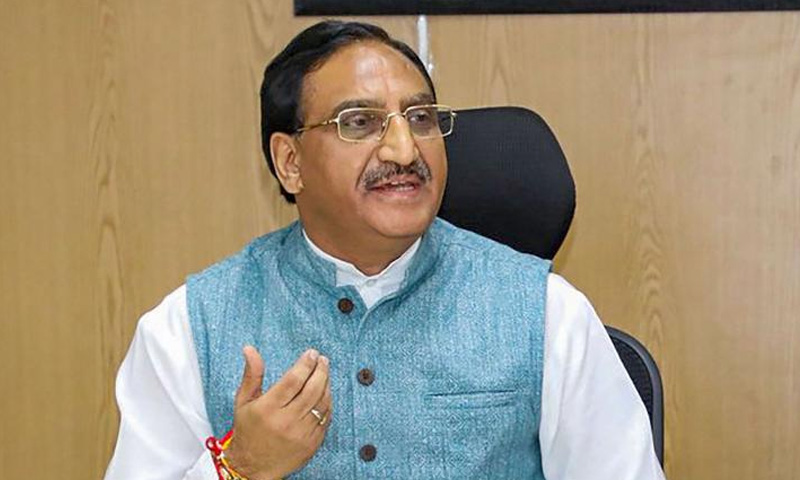 A bench headed by Justice R F Nariman stayed the contempt proceedings on a plea filed by the Union minister of Education.

The Uttarakhand High Court on 15th October) issued show-cause notice to a top official in a civil contempt petition to ascertain as to how he lowered the amount to be recovered from present Union HRD Minister and Ex-CM of Uttarakhand, Ramesh Pokhriyal Nishank.

The Bench of Justice Sharad Kumar Sharma was hearing a contempt petition, wherein the Judgement of the Division Bench in Rural Litigation and Entitlement Kendra (RLEK) Vs. State of Uttarakhand & Others Writ Petition (PIL) No. 90 of 2019, and the direction, contained therein was sought to be complied with.

Notably, in the afore-mentioned Judgment, the Division bench of the High Court had directed, among others, Union HRD Minister and Ex-CM of Uttarakhand, Ramesh Pokhriyal Nishank to deposit the entire penal rent and other amount due (Rs. 41,64,389.00) for the amenities availed by him as a Chief Minister of the State.

Directions were given to the State Government authorities that the amount be recovered from him (and other Ex-Cms of the State), against whom (among others) the PIL was drawn [RLEK v. State of Uttarakhand & Others].

The Court had ascertained the said amount (Rs. 41,64,389.00), based upon an affidavit of Additional Secretary/Estates Officer of the State dated 12.02.2019, which was referred to in the Division Bench Judgement [RLEK v. State of Uttarakhand & Others], in which the details of liabilities to be met by each of them (Ex-CMs of the State) was detailed, by quantifying the amount.

It was informed to the Court by the counsel for the petitioner that the so-called compliance affidavit, filed by the respondent and the deposit, as projected in the application of compliance to have been made by the respondent (Ramesh Pohkriyal Nishank), in fact, was not in consonance to the determination, which has now been made by Mr. Deependra Kumar Chaudhary, Additional Secretary, Government of Uttarakhand.

In other words, it was argued that the Additional Secretary to the Govt. of Uttarakhand had directed the respondent No. 1 (Ramesh Pohkriyal Nishank), to remit an amount as determined by him to be of Rs. 10,77,709/-, instead of Rs. 41,64,389.00, which was payable according to the Division Bench Judgment of 2019.

"This determination (of amount Rs. 10,77,709/-) which has been made by Mr. Deependra Kumar Chaudhary, the Additional Secretary, on 10.09.2020, runs contrary to the prior determination, which was considered by the Division Bench of this Court, which was submitted by way of an affidavit by the then Additional Secretary/Estate Officer, by an affidavit dated 12.02.2019, where the State itself in compliance of the earlier order passed by the Division Bench on 16.02.2017, had calculated the respective liability of rent for the use of an occupation of the premises and other dues towards amenities and the said affidavit as submitted by the State, itself earlier on 12.02.2019, had shown the amount of liability payable by the respondent 1 (Ramesh Pohkriyal Nishank), to be Rs. 41,64,389/-" (emphasis supplied)

As far as Ramesh Pohkriyal Nishank's case was concerned, the Court noted that he was communicated by the Additional Secretary/Estate Officer of the Govt. of Uttarakhand, of the amount of liability due to be paid, and consequently, whatsoever amount was demanded, he remitted the same.

Hence, according to the argument of the counsel for the respondent (Ramesh Pohkriyal Nishank), the judgement stood complied with, on his part.

But the petitioner's counsel submitted that the determination of the amount, made by Mr. Deependra Kumar Chaudhary, Additional Secretary to the Govt. of Uttarakhand, would in itself amount to be a contempt of a criminal nature for the reason being that he sat upon a determination, which was made by the Division Bench of this Court and that too when it was based upon the state's own stand taken in their affidavit filed by the then Additional Secretary dated 21.02.2019.

"Recalculating the amount and that too contrary to the statements of account which were submitted in pursuance to the order of this Court, it would amount to be a deliberate and an intentional contempt and rather it would be an attempt to mislead the Court also by portraying different liabilities than what has been considered by the Division Bench in its judgement." (emphasis supplied)

"This Court is of the view that it is an act of an intentional contempt, hence Mr. Deependra Kumar Chaudhary, Additional Secretary, Govt. of Uttarakhand is liable to be noticed for committing a wilful contempt."

In these circumstances, the Court, suo-moto took cognizance and directed the petitioner to implead Deependra Kumar Chaudhary, Additional Secretary, Govt. of Uttarakhand as party respondent No. 2 to the contempt petition.

Importantly, the Court directed that notice be issued to him "to show cause as to how and in what manner he has determined the amount, payable by the respondent No. 1 (Ramesh Pohkriyal Nishank), contrary to affidavit, which was placed before the Division Bench of this Court dated 12.02.2019 and was the basis of the judgement dated 03.05.2019."

Notably, in June 2020, the Uttarakhand High Court had declared that the 'Uttarakhand Former Chief Ministers Facility Act, 2019' which allowed former Chief-Ministers of the State to stay in government bungalows without paying market rent, WAS "ultra vires".

The Division Bench comprised of Chief Justice Ramesh Ranganathan and Justice RC Khulbe had held that a Chief Minister, once he demits office, is on par with the common man and is not entitled to any preferential treatment, other than security and other protocols