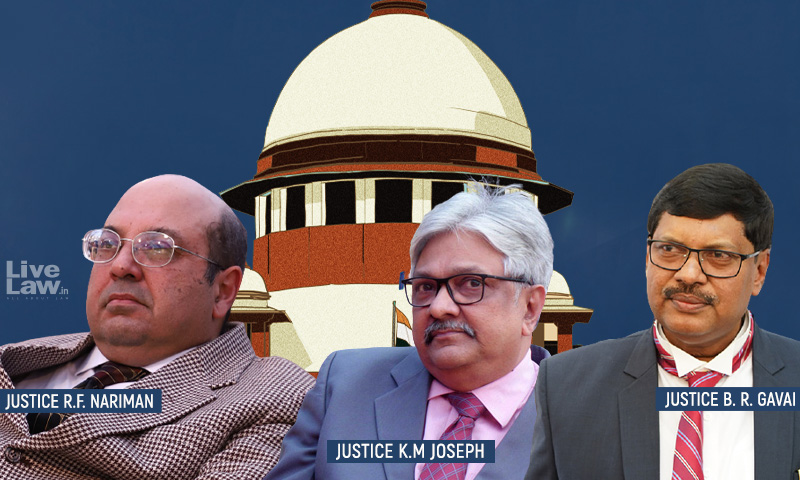 The Supreme Court on Tuesday upheld a 2013 judgment of the Gujarat High Court which struck down the provisions of the Constitution(97th Amendment) Act 2011 to the extent it introduced Part IX B in the Constitution to deal with co-operative societies.A 3-judge bench comprising Justices Rohinton Nariman, KM Joseph and BR Gavai dismissed the appeals filed by the Union of India against the...

The Supreme Court on Tuesday upheld a 2013 judgment of the Gujarat High Court which struck down the provisions of the Constitution(97th Amendment) Act 2011 to the extent it introduced Part IX B in the Constitution to deal with co-operative societies.

A 3-judge bench comprising Justices Rohinton Nariman, KM Joseph and BR Gavai dismissed the appeals filed by the Union of India against the judgment of the Gujarat High Court. The bench unanimously held that the 97th Constitutional Amendment required ratification by at least one-half of the state legislatures as per Article 368(2) of the Constitution, since it dealt with a entry which was an exclusive state subject (co-operative societies). Since such ratification was not done in the case of the 97th Constitutional amendment, it was liable to be struck down.

There was a split in the bench on the point whether Part IX B will survive with respect to multi-state co-operative societies. While the majority comprising Justices Nariman and Gavai upheld those provisions of Part IX B which deal with multi-state co-operative societies by applying the doctrine of severability,  Justice Joseph dissented on this count. Justice Joseph held that the doctrine of severability was not applicable and struck down the entire amendment.

The Gujarat High Court had held that the amendment, to the extent it introduced conditions for state laws on co-operative societies, was liable to be struck down as it was passed without the ratification of one-half of the state legislatures as mandated by Article 368(2) of the Constitution.

As per Article 368(2), ratification of one-half of state legislatures is required for an amendment which makes changes to an entry in the state list. Since co-operative societies was a state subject as per Entry 32 in List II of the Seventh Schedule, the amendment introducing Part IX B required ratification as per Article 368(2), the High Court ruled.

The High Court noted that Part IXB introduced several conditions restricting the scope of state legislatures on aspects related to cooperative societies. As per the amendment, state laws are subject to the stipulations in Part IXB. For example, a definite restriction has been imposed upon the State Legislatures regarding fixation of maximum number of Directors of a Co-Operative Society which shall not exceed twenty-one; the duration of the term of office of the elected members of the board and its office bearers has been fixed to be five years. Conditions related to conduct of elections, time-period of audits, filing of financial accounts etc., were also introduced. Further, Part IX B prescribed the acts which would be offences relating to the co-operative societies. In short, Part IX B laid down several mandates, from which the State Legislature cannot deviate from.

The Gujarat High Court held that the sweep of the amendments had the effect of Parliament encroaching into the domain of state legislatures.

"…in spite of the fact that the law elating to Co-Operative Societies is still in the List II of the 7thSchedule, without bringing the subject of Co-Operative Societies either into List I or List III, by way of this amendment, the Parliament has controlled the said power without complying with the provisions of Article 368 (2) of the Constitution by taking ratification of the majority of the State Legislatures", the Court observed.

The High Court opined that it was an indirect way of shifting the subject of cooperative societies to the Union List or Concurrent List from the State List. Such a shifting of subject out of state list would have required the ratification by majority of the states.

"..a constitutional authority cannot do indirectly what it is not permitted to do directly", the Court observed.

Therefore, the Gujarat High Court struck down the provisions of Part IX B introduced by the Constitution(97th Amendment) Act 2011 to the extent they related to co-operative societies.

In its appeal before the Supreme Court, the Union Government, represented by the Attorney General for India KK Venugopal, raised the following main arguments:

Justice Nariman, who wrote the majority judgment, observed that the exclusive legislative power given to states in matters under the Second List of the Seventh Schedule was an important constitutional principle which forms part of the basic structure of the Constitution.

"There can be no doubt that our Constitution has been described as quasi-federal in that, so far as legislative powers are concerned,though there is a tilt in favour of the Centre vis-à-vis the States given the federal supremacy principle...yet within their own sphere, the States have exclusive power to legislate on topics reserved exclusively to them.

Referring to the precedent in Builders' Assn. of India v. Union of India and the commentaries of renowned constitutional jurist HM Seervai, Justice Nariman's judgment stated an important principle as follows :

"...any significant addition or curtailment of a field of legislation which is contained in an Entry in List II of the 7th Schedule of the Constitution would also amount to a 'change' so as to attract the proviso to Article 368(2). It is not necessary, as has been contended by the learned Attorney General, that a change referred to in the proviso to Article 368(2) would only be if some part of a subject matter given to the States were transferred to Parliament or vice-versa. Even without such transfer, if there is enlargement or curtailment of the subject matter contained in a field of legislation exclusively reserved to the States, then in effect a change has been made to an entry in a legislative list, which change, if significant,would attract the proviso to Article 368(2) and therefore require ratification".

Having outline the principle as above, the judgment then proceeded to examine the effect of Part IX B on state legislatures. Based on that, the Court came to a conclusion that the provisions of Part IX B subjected the state legislatures to a lot of curtailments and substantially impacted their exclusive power over co-operative societies.

"From all the above, it is clear that the exclusive legislative power that is contained in Entry 32 List II has been significantly and substantially impacted in that such exclusive power is now subjected to a large number of curtailments. Indeed, Article 243ZI specifically mandates that the exclusive legislative power contained in Entry 32 List II of the State Legislature is now severely curtailed as it can only be exercised subject to the provisions of Part IXB; and further, Article 243ZT makes it clear that all State laws which do not conform to the restrictions mentioned in Part IXB automatically come to an end on the expiration of one year from the commencement of the Constitution 97th Amendment Act"

"The aforesaid analysis of Part IXB of the Constitution leads to the result that though Article 246(3) and Entry 32, List II of the 7thSchedule have not been 'changed' in letter, yet the impact upon the aforesaid articles cannot be said to be insignificant. On the contrary, it is clear that by curtailing the width of Entry 32, List II of the 7thSchedule, Part IXB seeks to effect a significant change in Article246(3) read with Entry 32 List II of the 7th Schedule inasmuch as the State's exclusive power to make laws with regard to the subject of co-operative societies is significantly curtailed thereby directly impacting the quasi-federal principle contained therein. Quite clearly, therefore, Part IXB, insofar as it applies to co-operative societies which operate within a State, would therefore require ratification under both sub-clauses (b) and (c) of the proviso to Article 368(2) of the Constitution of India".

In this regard, the bench noted that the 73rd and 74th amendments, which introduced provisions to deal with municipal corporations and panchayats, were also send for ratification by states.

The Court also rejected that argument of the Attorney General that since most of the States have changed their laws in tune with Part IXB, they have ratified the same by implication. The Court said that the procedure under Article 368(2) has to be followed. Also, the argument that no state has come forward to challenge the amendment did not appeal to the bench.

"When a citizen of India challenges a constitutional amendment as being procedurally infirm, it is the duty of the court to examine such challenge on merits as the Constitution of India is a national charter of governance affecting persons, citizens and institutions a like"

Justice Nariman's judgment also clarified that the Court has examined the issue only from the procedural issue of Article 368(2) and has not examined the argument if it affected the basic structure of federalism.

"We reiterate that our judgment is confined to the procedural aspect of Article 368(2) proviso, there being no substantive challenge to PartIXB on the ground that it violates the basic structure doctrine as laid down in Kesavananda Bharati's case (supra)", the judgment stated.

"The judgment of the High Court is upheld except to the extent that it strikes down the entirety of Part IXB of the Constitution of India .As held by us above, it is declared that Part IXB of the Constitution of India is operative only insofar as it concerns multi-State co-operative societies both within the various States and in the Union territories of India",  the majority judgment said in conclusion.

Also Read :  Supreme Court Sheds Light On The Contours Of Ministry Of Cooperation

Case Title : Union of India vs Rajendra Shah and others